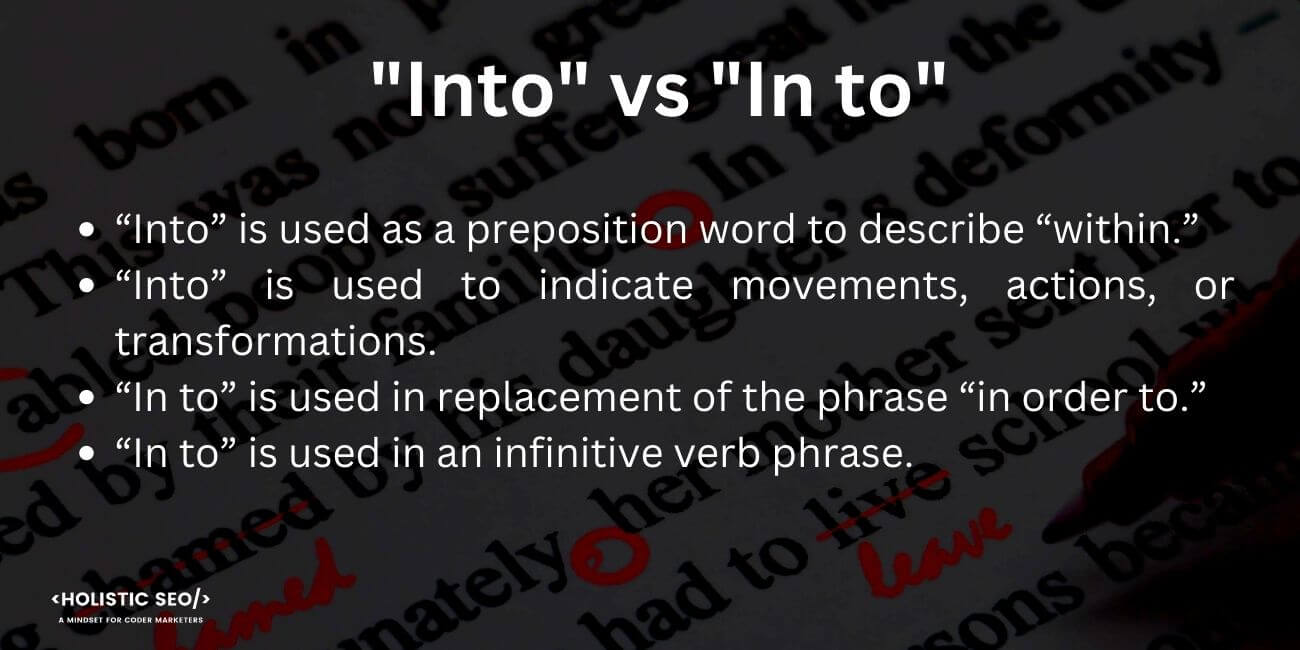 The words “into” and “in to” have the same pronunciation and spelling. The only thing that differs in these words is the space, usage, and definition. The words “into” vs. “in to” are two completely different words. The word “into” indicates movements, action, or transformation, or “within.” “Into” describes where something is; going inside something else. However, the only time when the word “into” does not involve a sense of “within” is when some kind of change or transformation has taken place. Meanwhile, the word “in to” is usually meant to mean “in order to.” They are not combined phrases, when “in” and “to” are used as separate words. Furthermore, the words “in” and “to” are two unrelated words; the adverb “in” and the preposition “to.” They are not really related and only happen to fall next to each other based on sentence construction.

The differences and comparisons for “into” and “in to” are listed below.

What does “Into” Mean?

The word “into” involves a lot of different meanings. The word “into” means expressing movement or action with the result that someone or something becomes enclosed or surrounded by someone else. Sometimes, the word “into” means expressing a movement or action with the result that someone or something makes physical contact with something else. It is sometimes referred to as a route by which someone or something arrives at a particular destination. Another meaning for the preposition “into” is indicating the direction toward which someone or something is turned when confronting something else. Furthermore, it means indicating an object of attention or interest, expressing a change of state, expressing the result of an action, and expressing of division. The origin and etymology of the word “into” come from the Old English “into, to, against, in,” originally in to. It emerged in late Old English to do the work of the dative case inflections, then fading, that formerly distinguished, for instance, the notion of “in the house” from that of “into the house.” Furthermore, the word was first recorded in 1967 in American English youth slang. On top of that, the word into is one of the most common words in the English language. It is one of the most important words in the daily lives of individuals to express their thoughts, especially when it comes to having conversations.

What are the sentence examples with “Into”?

Listed below are the example sentences using the word “into.”

When to use the word “Into” in a sentence?

What is the difference between “Into” and “In to”?

The word “in to” is a combination of adverbs and prepositions. The “in” is the adverb, followed by the preposition “to.” They are not really related and only happen to fall next to each other based on sentence construction. Sometimes, the word “in” is paired with a verb to form a phrasal verb; it is an example of “in” being used as a verb particle. It functions as a modifier of the phrasal verb when the word “to” follows the verb particle. The words “in” and “to” remain separate to convey the intended meaning. On top of that, there are no history and etymology of the word “in to” because the word “in” and “to” are not really closely related. However, the history and etymology of the word “in” comes from a Middle English merger of Old English in (prep.) “in, into, upon, on, at, among; about, during;” and Old English inne (adv.) “within, inside,” from Proto-Germanic *in (source of Old Frisian, Dutch, German, Gothic in, Old Norse i), from PIE root *en “in.” The simpler form took on both senses in Middle English. The use of the word “in” started in the year 1600. Meanwhile, the word “to” comes from the Old English to “in the direction of, for the purpose of, furthermore,” from West Germanic *to (source of Old Saxon and Old Frisian to, Dutch toe, Old High German zuo, German zu “to”). The nearly universal use of to with infinitives (to sleep, to dream, etc.) arose in Middle English out of the Old English dative use of to. It helped drive out the Old English inflectional endings (though in this use to itself is a mere sign, without meaning). Furthermore, the word “to” is commonly used as a prefix in Middle English (to-hear “listen to,” etc.), but few of these survive (to-do, together, and time references such as today, tonight, tomorrow — Chaucer has to-yeere). The word “to” is attested from mid-14c. The word “in to” is very common in the English language. It became part of the lives of people as it helps them deliver the message well.

What are the sentence examples with “In to”?

Listed below are the example sentences using the word “in to.”

When to use the word “In to” in a sentence?

What are the synonyms of “In to”?

There are no exact synonyms for the word “in to” because the word is a combination of two words that are not related to one another. However, the use of the word “in to” is replaceable with the phrase “in order to.” Some examples are “They rose in order to (in to) fight for their own rights, liberties, and land.” “You must release me in order to  (in to) free yourself.” On top of that, there are no other variations of the words “in to.” There are ​​no others   to use aside from the phrase “in order to.”

Comparison between “Into” and “In to”

Listed below is the table that shows a comparison between the words “into” and “in to.”

Why are “Into” and “In to” misused and interchangeably in English?

The words “into” and “in to” are actually very common grammar mistakes that people get mixed up. Writers and speakers get confused with the word because they have the same pronunciation and almost the same spelling except that the word “in to” has space because it is two words combined. The solution to avoid confusion with these words is to remember that the word “into” is used as a preposition and is used to answer the questions with “where.” Meanwhile, the term “in to” is two words combined to form “in” as an adverb and “to” as a preposition or infinitive.

Are “Into” and “In to” in the most commonly misused English words?

What are the other similar Misused Word Pairs like “In to” and “Into” in English?

Listed below are the other similar misused word pair like “into” and “in to” in English.

What are the things should a content writer consider in using the word ”Into” and “In to”?

There are a lot of ways to consider in using the word “into” and “in to”. To avoid confusion with these words, the best way to tell the difference between the two terms is to proofread the sentence. Another thing to consider is to determine the intentions. Specifically, when deciding whether a writer wants to say something literally. The word “into” be often the more literal choice than the word “in to”, specifically when using idioms in writing. Furthermore, when it comes to the word “in to,” a writer must consider it as two words. It is a two-combined word used as one to function as a modifier of the phrasal verb.

Can content writers use “Into” and “In to” in one sentence?

How do Content Writers use “Into” and “In to” in their articles?

Do Content Writers use “Into” and “In to” in the wrong way?

No, professional writers are able to comprehend the difference between the words “into” and “in to.” However, there are some instances, specifically for beginners, where they have confusion with the words. Keeping straight, the word “in to” as a phrase is sometimes hard. It is an important part of semantics in the English language because the difference actually changes the meanings. It is very important to know the difference between the two and when to use them in a sentence to avoid grammar errors when writing an article.

Do Misused Words such as “In to” and “Into” affect SEO and UX?

Yes, the misuse of words completely influences search engine optimization (SEO) and user experience (UX). The words “into” and “in to” are parts of grammar, and using them incorrectly might impact the business online and the ranking of the content. Having grammatical errors in producing content makes the user experience question the attentiveness of the company. Furthermore, the correct usage of grammar is very essential in SEO when it comes to ranking the website online. Search engines read each website’s content to discern what it’s about. Good use of grammar helps search engines read the text and grasp the message behind your content. They are able to rank the content for the right keyword phrases as a result. On top of that, Google has stated that it doesn’t penalize for grammar or spelling errors, it has confirmed that reputable pages do have better spelling and grammar.