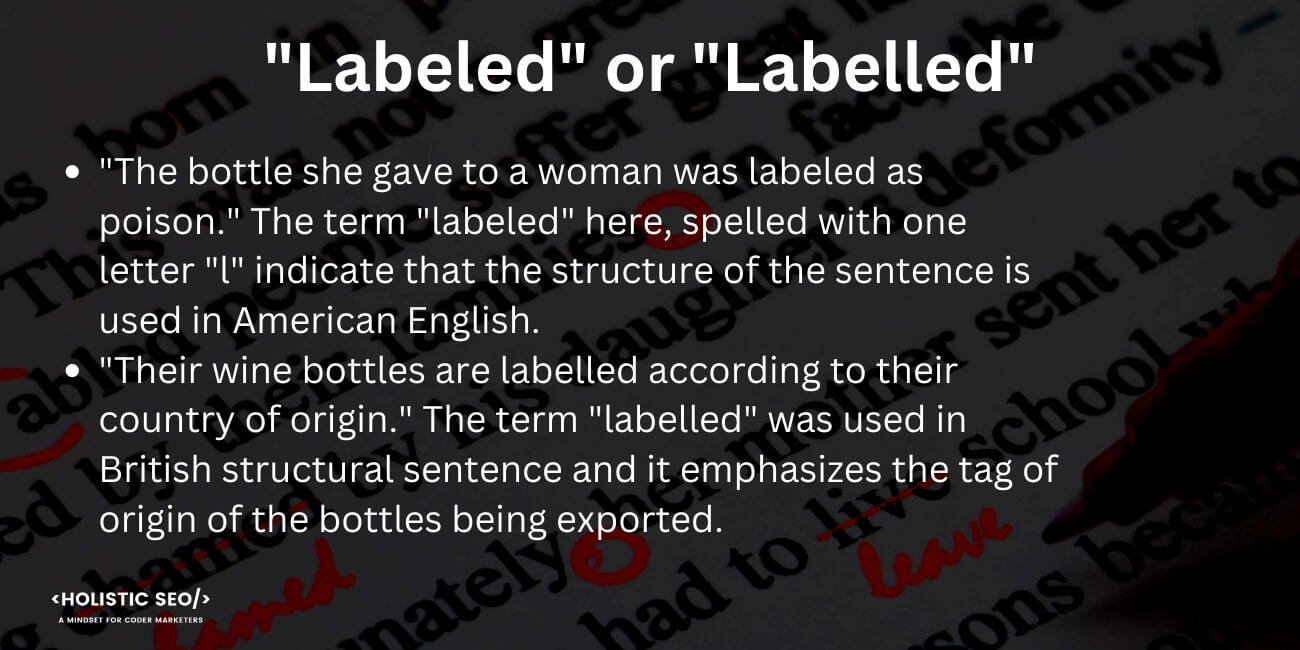 What is the Difference between Labeled and Labelled?

The main distinction between the words “labelled” and “labeled” is the dialect in which they are used. There are numerous obnoxious spelling differences between both American and British English, frequently occurring between two different versions of the same word. The spelling of the word “labeled” with just one “l” is the most commonly used in American English. Meanwhile, the spelling of the word “labelled” with a double “ll” is the most commonly used in British English. These terms originate from the verb “label,” which means to insert a notice to something, usually paper, on which information is recorded.

How to Spell Labeled and Labelled?

The spelling of the words “labeled” and “labelled” is only slightly different from one another. The word “labeled” only needs one “l” in American English. Meanwhile, the word “labelled” in British English must be spelled with a double “ll.” On top of that, when beginning to pick up and learn English, it is absolutely necessary to familiarize oneself with the standard pronunciation and spelling of the language. The most effective strategy is to become familiar with it and explore its phonetics. There is no difference in the pronunciation of the words ”labeled” and “labelled.” The speaker must divide them into two syllables or two sounds to pronounce the words. The words must be pronounced with a combination of the sounds ”LAY” and “BUHLD.” There are some helpful hints that guide the speakers through correctly pronouncing the words. First, the speakers need to record themselves repeating the words ”labeled” and “labeled” in a complete sentence. Next, they must watch the documented session and listen to what was said. It is a helpful trick to be able to mark their own mistakes quite comfortably. Second, if they find that recording themselves saying the words “labelled” and ”labeled” does not help, they must look up guides on how to properly pronounce those words on YouTube. Lastly, they really need to zero in on a single accent. Even though these words are pronounced in the same way, the strategies discussed helped the speakers apply them to other words that have the same meaning but are spelled differently.

How to Use “Labeled” in American English?

It is crucial to keep certain things in mind when using the word “labeled” in American English. The word “labeled” functions either as a verb or a noun, depending on the context. The noun form of the word “labeled” refers to the piece of paper or similar content used to identify and describe an object. It is a term or label that is used for the purpose of classifying a person or thing, particularly one that is incorrect or prohibitive. Meanwhile, when used as a verb, the word ”labeled” means to affix a label to the object that is being discussed. It is the act of putting something into a category, typically in an improper way or one that is overly restrictive. The American English language must be used for American audiences.

Listed below are the example sentences for the word “labeled” in American English.

How to Use “Labelled” in British English?

Certain factors must be taken into account if the British English word “labeled” is to be used. The word “labeled” functions either as a verb or a noun, depending on the context. The word “labeled” is used as a noun to refer to a little tag or label made of paper or another material that is affixed to an item and provides information about that item. It takes the form of a term or a name that is used to classify a person or thing, particularly one that is erroneous or that places restrictions. Moreover, when used as a verb, the word “labeled” means to affix a label to whatever it is that is being discussed. It is to be placed in a category, typically in an incorrect manner or one that is overly restricted. The British English language must be used for British audiences.

Listed below are the example sentences for the word “labelled.”

What are the Common Phrase Combinations of “Labeled” and “Labelled”?

Listed below are the common phrase combinations of “labeled” and “labelled.”

The table demonstrates that there is no difference in meaning between the two ways that the word “labeled” and “labelled” are spelled. The only thing that changes about the way words are spelled is the dialect that is being utilized. The term “labeled” is spelled differently in British English than it is in American English; nonetheless, both versions of the word are pronounced the same. The intended readership determines whether the words “labeled” or “labelled” must be used. The exact spelling of the words “labeled” and “labelled” determines by the demographic profile of the audience for whom the information was created.

What are the Example Uses of “Labeled” in American Publications?

​​Listed below are the example uses of “labeled” in American publications.

What are the Example Uses of “Labelled” in American Publications?

Listed below are the example uses of “labelled” in British publications.

When to use the word “Labeled” and “Labelled”?

How to Use “Labeled” or “Labelled” for Content Marketing?

Content marketers must tailor their use of “labeled” and “labelled” to the characteristics of their target audience. The person responsible for writing the content has the option of selecting a variety of spellings for the words. Only in front of an American English audience is the spelled term “labeled” be used because it is the language that is most often spoken in that country. Meanwhile, the word “labelled” must only be used in British English because that variety of English prefers to spell the word with that particular letter combination. Using these perfectly spelled terms in content marketing ultimately results in a higher rating and greater viewers. Furthermore, having an intimate knowledge of one’s audience and a command of the appropriate linguistics sheds light on unfulfilled requirements. It helps a company shape its product or service and its approach to selling it so that it more closely satisfies the needs of its target market.

Accents matter in many languages, not just English, and have a big effect on search marketing results. Search results for each potential accent, implying (but not guaranteeing) that the system differentiates between them. However, the rankings are all different, despite the fact that there are some overlaps, with the top places fluctuating less than the lower entries on the first page. Consequently, the algorithm approaches different forms of spelling in a variety of ways. It only indicates that the prospects exist and have an effect on multi-regional SEO for intelligent marketers. Accents are marks that are placed both above, below, or between existing characters in a textual element in the relevant language. The multi-regional SEO guide frequently discuss the significance of accents for search engine algorithms.  Furthermore, it is quite important to have a proper accent while writing content for search engine optimization (SEO). Therefore, employing accents for various types of audiences is beneficial in terms of ranking the website or the content in various search engine optimization (SEO) internationally.

What are the Similar Accent Differences such as “Labeled and Labelled”?

Listed below are similar accent differences, such as “labeled“ and “labelled.“

Are the spellings “Labeled” and “Labelled” both correct?

Yes, both “labelled” and “labeled” are acceptable forms of the word in written communication. They have the same meanings because they are both employed in the same context. The only distinction between the two is the particular dialect that each speaks. The writer, however, must keep in mind that the words must be employed in the appropriate linguistic format. The English language spoken in the United States often makes use of the word “labeled.” Meanwhile, the word “labeled” is the one that is utilized more frequently in the British English language.