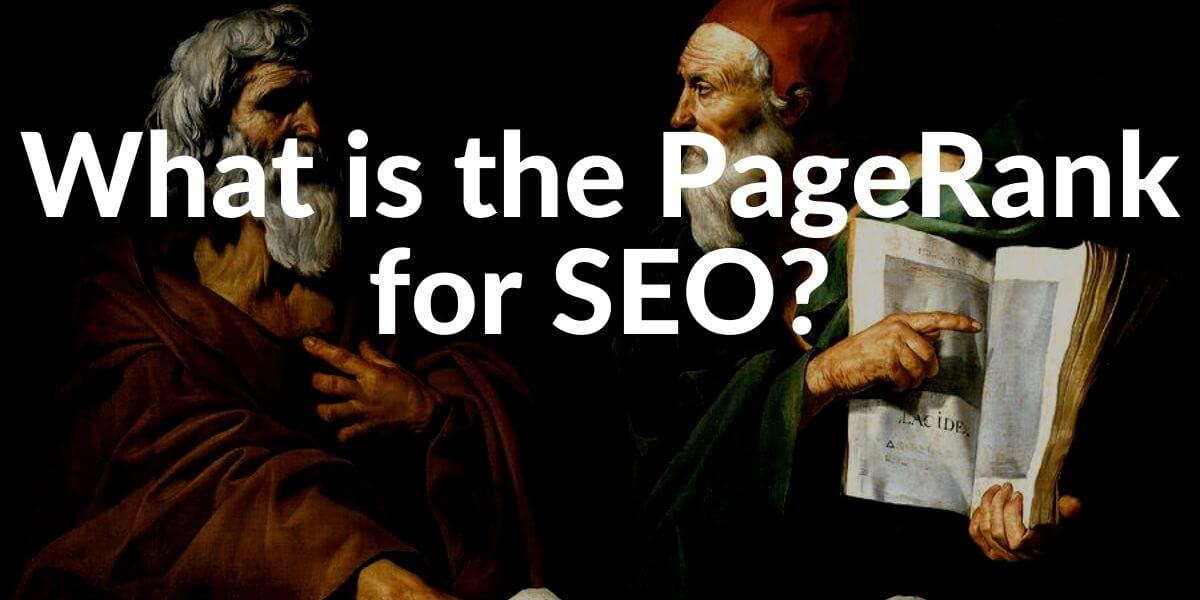 The PageRank algorithm describes a procedure that enables websites to be rated on the basis of their incoming links. The name PageRank originally comes from Larry Page. Together with Sergei Brin, he developed this algorithm at Standford University and patented it in 1997.

Origin of the name of PageRank

The term “PageRank” does not refer to the rank that a website has in the search results, but goes back to one of the developers of the algorithm – Larry Page. Together with Sergey Brin, he developed the method for node ranking in a linked database at Stanford University in 1997, for which a patent was applied for – the first steps in the creation of Google, whose founders are Brin and Page. The PageRank was, so to speak, the basis for Google search and at the same time the decisive factor for the success of the search engine.

How the PageRank works

Each page receives a PageRank value between 0 and 10, whereby it becomes more and more difficult to reach the next level. With a PageRank of 0, either pages that are new to the Internet or pages that were devalued by Google due to violations are rated.

PageRank is based on the principle of link popularity, where the number of incoming links is the main criterion for the relevance assessment of a page. In contrast to link popularity, PageRank does not simply use the number of links, so it does not simply rate a page better just because it has more incoming links than another page. He also goes into the value/importance of the linked pages. This means, for example, that three external links on a page can be more useful than 20 external links – if these three links come from higher-quality sites, which themselves have achieved this status through high-quality links. So the more important the linking pages are, the higher the rank of the page to which these links point.

The PageRank algorithm ultimately evaluates all documents in the network according to their links or the importance of their links.

The formula for this is:

PR (Ti): PageRank of pages Ti, of which a link points to page A.

According to the developers of PageRank Larry Page and Sergey Brin, the calculation is based on the behavior of a random internet surfer – the random server. This begins its path on any page in the network and reaches other pages via links. However, this does not happen endlessly, because at some point it is enough for the random user and he breaks the path – this is taken into account via the damping factor d. The probability that the surfer will get to another page via a link depends on the number of links on the page. This probability is roughly comparable to the PageRank of the page.

Today, however, this random model is considered to be out of date because the user no longer clicks on links randomly, but many other factors influence his behavior. It is therefore not a random server, but a reasonable server. The relevance of the link and its position on the page play a role in the reasonable server model. So the user clicks e.g. more likely to find a link if it fits thematically to the page it is on and if the link is in the text rather than in the footer or sidebar.

To enable the PageRank calculation, Bob Wakfer once published the PageRank spreadsheet. The exact way the PageRank is calculated by Google is not known, but it is generally recognized in the industry that this table is correct in most cases [1]:

This table clarifies the question: “How many links with PR x are required to reach a PR x?”. For example, if a PageRank of 6 is to be achieved, three backlinks with PR 7 are required. If you want to reach a PR 6 with PR 6 links, 18 pieces are already required. Basically, a certain PageRank can be reached with a single link from another website with a PageRank two points higher. For example, a PR 2 with a PR 4 link or a PR 6 with a PR 8 link can be reached. The lower the PageRank of the linked pages, the more links are required to reach a certain PageRank. The calculation of the PageRank is a very complex process that cannot be shown in a simple table. Depending on the outgoing links of a website, the table may need to be adjusted. As a rough guide, however, it had long been of great importance in the SEO scene. Upon request, Google displayed the PageRank of a website using a green bar.

One-time use for search engine optimization

Before 2016, webmasters and SEOs were able to make an initial assessment of the trustworthiness of a website using the PageRank. The weighting was carried out on a scale from 0 to 10. Websites with PageRank 0 were either new and had not yet been rated via the PageRank or a downgrading due to webspam had probably occurred. The higher the PageRank, the higher the trust of a website was, at least in theory. For a long time, for example, the website of the White House in the USA was one of the sites with the highest trust and a PR 10. Websites from cities, universities or research institutions and non-profit organizations were also given a high PageRank.

Alternative use of PageRank Algorithm

A similar algorithm was first used in “sociometry” in the middle of the last century. At that time it was used to calculate the status of an individual in society. At Washington State University, it was found that the Google PageRank algorithm can also be used to determine the position of water molecules in the middle of other toxic chemicals. With MozRank, the company Moz has introduced an internal factor for evaluating link popularity. Ryte’s OPR or Oncrawl’s LinkFlow is also an internal factor that reflects the link popularity of a page.

Also, Ahrefs, Semrush, Serpstat, SEOMonitor and other SEO Softwares have their own custom PageRank calculation algorithms and terms such as Trust Flow and Citation Level of Majestic or Relevance and Influence Metrics of Authoritas.

Google makes a distinction between external/public and internal in the PageRank. According to the company, the internal PageRank, which is only visible to Google, is updated regularly, while the public PageRank is or was only updated infrequently and at very different intervals.

A highly rated page can pass its high PageRank to pages to which it refers via a backlink. However, the value of this link is reduced the more other links are on the page. For example, the PageRank Sculpting technique tries to transfer the PageRank of a website to its sub-pages.

Google first published PageRank values in 2000 using a toolbar for Internet Explorer. There, this quality rating of the website was not only displayed on a scale from 1 to 10 but also graphically with a color-varying bar, green for a high, red for a low PageRank. However, since April 2016, the PageRank toolbar no longer exists. There is no longer any way to have the PageRank displayed publicly. According to Google, PageRank is still used internally for the evaluation of search results.

The last Toolbar PageRank update was made in December 2013. About a year later, John Mueller said that no further updates were made after this update and that the Toolbar will probably not be updated in the future.

Relevance of the PageRank for SEO

Google itself emphasizes that the PageRank now only plays a very small role in the ranking. While this algorithm initially formed the basis for the search results, today there are many other factors that influence the ranking of a website and are much more relevant with regard to the user experience.

Today, according to Google, PageRank itself only plays a subordinate role in the ranking of websites. Since it can no longer be displayed in toolbars or other programs, the key figure is no longer usable and irrelevant for webmasters. For a very long time, the publication of PageRank data meant that webmasters and SEOs only focused on these key figures and overlooked the core of search engine optimization. This was probably also a reason for Google to end public access to the PR. Different providers of SEO tools and web analysis tools today use their own metrics to determine the value of a page. Visibility or link metrics can help determine the domain authority. For SEOs and webmasters, however, it is still more important to focus on high-quality content and a technically flawless website, rather than putting metrics in the foreground.

The fact that the PageRank has lost a lot of its importance is certainly due to the numerous manipulative methods to influence it. With the introduction, a lively link purchase and exchange business developed, in which the PageRank acted as a kind of currency. However, it cannot be said that the PageRank was abolished. It is no longer relevant for today’s SEO measures since there is no current data on it anyway.

Why did Google Decrease the Importance of PageRank in its Algorithm?

Since the algorithm is based on links, the content, which is a more important criterion for the user, is neglected. Further developed search engine algorithms take this shortcoming into account by adding further ranking criteria. In addition, it was possible for a long time to buy links so that your site achieved better rankings. So there was great interest within the SEO scene to get backlinks from websites with a high PageRank. These links also gave the own project a high PageRank. However, these values ultimately said nothing about the actual added value, trust, or salary of a website. This has probably caused Google to no longer publicly disclose the PageRank of a website. For the internal evaluation of websites, the PageRank is certainly still of importance for Google, even if the figures are no longer made public by Google.

2 thoughts on “What is the PageRank for SEO?”