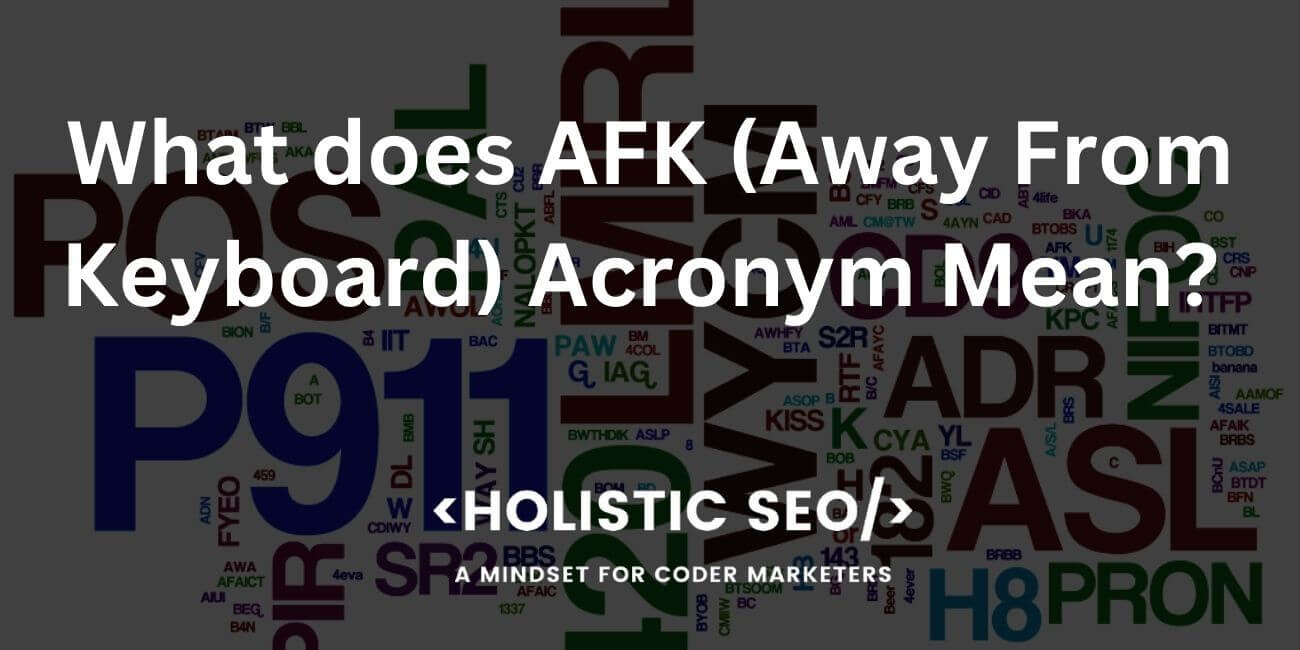 The abbreviation “AFK” refers to the phrase “away from the keyboard.” The initial meaning of the abbreviation “AFK” is to communicate to other users of a computer or device that the user has not been present at the device or computer for a certain amount of time. It is possible for a user to couple it with a time frame in order to signal to other users how long they have been absent from the keyboard. Typing “going AFK, be right back” is an illustration of taking a short break in the middle of something. The abbreviation “AFK” must be used whenever there is a need for a break from typing on a computer. The abbreviation is frequently used to denote that the user is inactive in both messaging and gaming. It gives players the ability to notify their fellow gamers or other relevant parties that they won’t be available until further notice. On top of that, the abbreviation “AFK” originates from a meme and a slang term that are common on the internet. Memes are the popular name for what are technically known as internet memes. It refers to a concept, habit, style, or image that is propagated through the use of the internet, most frequently through social media platforms. Meanwhile, “internet slang” refers to a style of language that is not considered conventional or official and is used by people to communicate with one another over the internet.

The gaming community is where the acronym “AFK” first made its appearance. Gamers from all around the world engage in conversation with one another via chat when playing games online. Team-based games are held together by a central guiding force known as the chat, which enables players to communicate with one another efficiently. Internet and LAN gaming became increasingly popular, and towards the end of the decade, the first multi-player online role-playing game players emerged in the 1990s. phrases such as “brb” and, more particularly, “AFK,” have become commonplace in the gaming community along with numerous other abbreviations. Meanwhile, linguists are uncertain as to whether the term “AFK” originated in the gaming community or an internet chatroom. The widespread adoption of the phrase is generally agreed upon to have been initiated by the gaming industry.

Do People use AFK for face-to-face Communication?

Yes, “AFK” is used by people when communicating with one another face-to-face. “Away from keyboard” is what “AFK” stands for in the context. It is not necessary for individuals to be present in the same geographic location in order to engage in face-to-face conversation. A video conference call or a less formal video chat are both viable options for accomplishing what has to be done to reap the rewards. Therefore, in order to use the term “AFK,” a person must be present at a computer or texting setup. It is the most fundamental use of the term. In contrast, the difference of being able to see the other person or people involved in a conversation is what gives “face-to-face” communication its name and its meaning. It facilitates a more fruitful exchange of information given that both the speaker and the listener are able to see and understand each other’s body language and facial expressions.

Is AFK only for textual communication?

Yes, the abbreviation “AFK” is used for text-based forms of communication. Speakers are unable to utilize it when physically communicating with one another attributed to the fact that “away from keyboard” is what the abbreviation “AFK” stands for. “AFK” indicates “unavailable to text,” “going offline,” or “taking a break from a textual chat,” although these are all synonyms for the same thing. The only time speakers or users are able to employ the acronym is when they are physically typing on their keyboard. In conjunction, the abbreviation “AFK” has emerged as the most popular phrase for use in casual conversation, particularly in the context of online gaming environments.

What do Scott Molski and Silvio Lacetti think about AFK and Internet Slang?

Professor Silvio Laccetti teaches humanities at Stevens Institute of Technology, where he teaches alongside Scott Molski. They produced a piece of writing with the title “The Lost Art of Writing.” It is all about a critical utilization of the terminology, forecasting lower work opportunities for younger people who utilize internet lingo. They believe that young people’s lack of ability to use correct punctuation and language lowers their chances of finding a job, and they believe that it is because young people are more likely to text while driving. Furthermore, young people frequently use misspellings, a variety of made-up terms, and goofy acronyms in their writing and speech. They think that professional or commercial communication must never be sloppy or badly designed and that it must always be adhered to. It makes no difference whether one is writing an article for publication or a message to be sent through electronic mail. Neither Scott Molski nor Silvio Laccetti is of the opinion that utilizing abbreviations in professional communication serves no purpose and is equivalent to employing mail slang.

What does Linguist John McWhorter think about AFK?

John Hamilton McWhorter is an American linguist who specializes in creole languages, Black English, and sociolects. He has a broad knowledge of the English language. He currently holds the position of associate professor of linguistics at Columbia University, where he teaches courses in American studies and the history of recorded music. John McWhorter uses abbreviations uniquely, particularly crafting weird sentences and usage with acronyms like “AFK.” He has a different perspective on how these must be interpreted. According to him, the use of these is a “linguistic miracle” that is “happening right under the nose” of everyone. According to him, it eventually turns into a symbol of accommodation and is used to cover gaps in dialogue. John McWhorter, who specializes in linguistics, is of the opinion that transitioning between both the language of the text and the language spoken by the rest of society is a positive development. McWhorter is of the opinion that it is common knowledge that being bilingual is beneficial to the health of the brain.

Is AFK a Pragmatic Particle?

Yes, the abbreviation “AFK,” which stands for “away from the keyboard,” is, in fact, a component of the pragmatic particle. The term “particle” has a time-honored significance in grammatical analysis. It has a modern connotation and is a portion of the speech that does not have an inflected form. In particular, it is a function word, which means that it is used in conjunction with another word or phrase, typically for the purpose of providing meaning. The primary purpose of a particle is to offer context to the sentence by expressing a mood or suggesting a specific action. Although a particle does have an inherent meaning and does, in fact, fit into other linguistic forms, the primary purpose of a particle is to add context to the phrase. The pragmatic particle contributes to the structuring of the communication process and the embedding of utterances within the context of the conversation.

When did Oxford English Dictionary accepted the AFK Abbreviation?

Is the oldest use of AFK on Usenet from the 1990s?

The initial usage of the abbreviation “AFK” dates back to the early 1990s and is seen on Usenet. Usenet fulfilled the same functions that are now performed by online discussion forums and social networks before the web as we know it today existed. The Usenet is accessible to many users from all walks of life. It is the communication platform that has been around the longest of all that now exists. The Usenet is a globally distributed discussion network that is accessible on personal computers. The broad purpose served as the inspiration for its development. In general, the Usenet is comparable to other online communities like message boards and forums, as well as social media. It is more acronym-heavy and private when opposed to other prominent social media platforms, and it features newsgroups that make it possible for users to share files and information with one another.

What are the Variations of AFK?

Listed below are the variations of the acronym “AFK.”

Listed below are some related terms to the acronym “AFK.”

What are the Foreign Equivalents of AFK from other Languages?

Listed below are some foreign equivalents of the acronym “AFK” from other languages.

How do Content Writers use AFK for communicating with Customers?

Content writers often use the abbreviation “AFK” because it helps to simplify the writer’s message and makes it simpler for clients to grasp what the writer is attempting to say when dealing with clients. It is helpful in fulfilling the stringent word-count target, reducing repetition of terms, and making the text easier to read as a result of these factors. Moreover, an SEO content writing is provided with further assistance through the effective utilization of acronyms such as “AFK” in a sentence. Acronyms are useful mnemonic tools that assist the author to facilitate the client’s ability to help them to recall the information. These devices help the client to recall information. It’s not entirely necessary to avoid using abbreviations like “AFK” (which stands for “away from keyboard”) when talking with customers. However, making use of them as the default option leads to a situation that is undesirable. It is important for writers to keep in mind that the majority of abbreviations are superfluous and that they must prefer to replace them with the fuller, more meaningful words that they stand for.

Do Social Media Marketers use AFK?

Does AFK a not serious term for SEO Content?

Yes, the ranking of SEO material is determined by a wide variety of criteria, and these elements are in turn influenced by a wide variety of other factors. The use of acronyms is one of the aspects that influence the material that is optimized for search engines. Using acronyms such as “AFK” is considered by Google to be the same as using a synonym when generating material for SEO. t helps the page rank much better for that keyword even if specific keywords aren’t directly stated on the page, and thus helps the page rank much higher overall. It is a very significant component of search engines since Google considers abbreviations and acronyms to be synonymous with one another. It gives the engine the ability to identify documents that make use of language that is distinct from the query. Furthermore, the SEO material needs to be able to pass Google’s E-A-T requirements in order for it to have a better ranking on Google’s page. Expertise, Authoritativeness, and Trustworthiness are the three components that make up the E.A.T. It is one of the criteria that they consider when Google ranks web pages. The quality of a page is one of the most important factors that determines where it appears in the organic search results on Google. These are the most essential variables that are utilized to determine the overall quality of a web page according to Google.