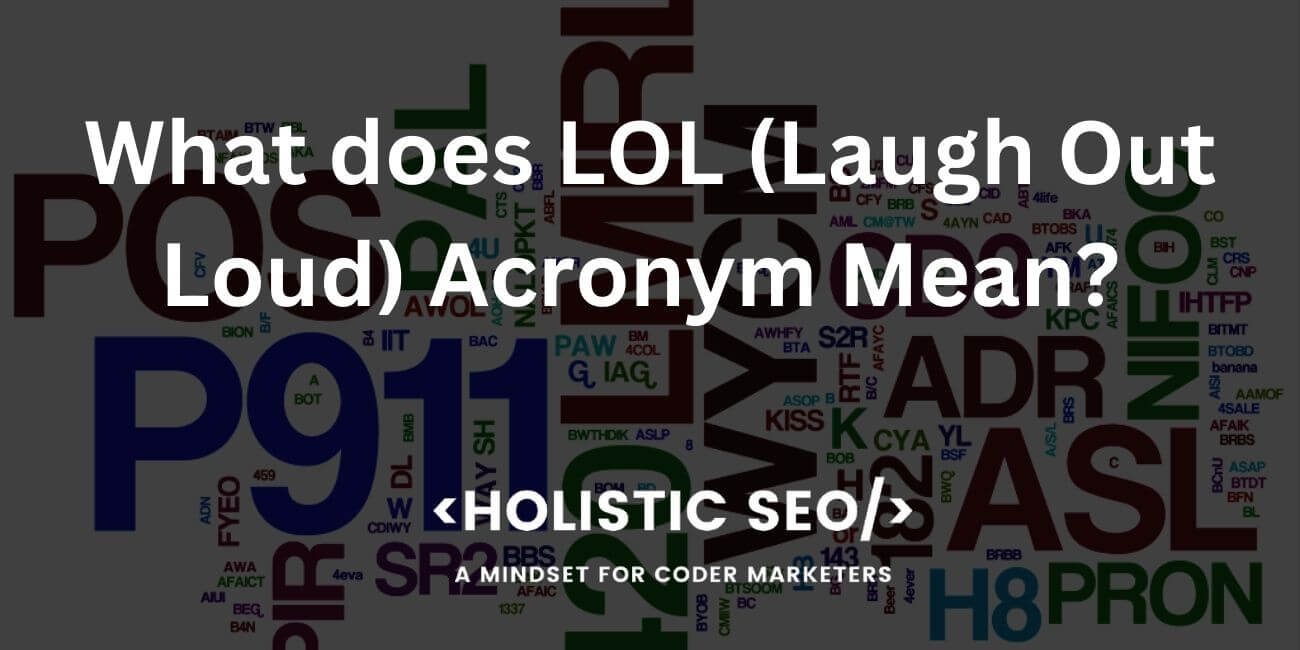 The LoL, or (Laugh Out Loud) acronym is a kind of internet slang. Primarily, it was used exclusively on Usenet, eventually, it was widely used in computer-operated communication devices and even face-to-face conversations. LoL is pronounced as an acronym and not as an abbreviation. People that aren’t familiar with some slang conversations ask in the earlier years, what does the text “lol” mean? The “LoL” acronym was supposed to be just an exclusive term, but it clicked between different generations until today. The word “lol” is considered a verb and an interjection, which means that it is typically used to emphasize an action of laughing out loud to express a strong emotion. The “lol” word is mostly used in casual conversation, such as in chat and text messages. “LoL” is used to provide intense emotion through a text message format every time there’s a funny conversation or situation. “LOL” eventually had different variations, like “LMAO.” It is the most intense version of the expression “LOL.” The difference between “lol” and “LMAO” is the added exaggeration of laughing out-loud in a fictional action just to get the picture of getting intense laughter. “LMAO” or (laughing my ass out) provides a more expressive response to a funny or hilarious conversation or situation. However, LOL is a more acceptable acronym than the LMAO for older generations because of its more discrete meaning than LMAO. Moreover, another variation of LOL is ROFL, meaning “rolling on the floor laughing.” ROFL is the most intense expression in a chat conversation that everyone sends to their fellow users. The difference between “lol” and “rolf”  is that “lol” is more restrained than “rolf” because of its intense meaning. These acronyms are called internet slang. Internet slang is a word that is not considered a standard to be used on legal terms. It is only used as a communication format or as a compact word to provide a bigger meaning. Most of these acronyms are used in internet memes. Internet memes are commonly known as unique ideas that are supposed to be funny with a mix of sarcasm and humorous captions. Internet memes are mostly cropped images from an event or based on the current trend that has a humorous caption based on the image it describes. Some of these internet memes are in a video format, a collection of different videos stitched into one to express different kinds of humor. Internet slang like LOL, LMAO, and ROFL are placed on these internet memes to provide a burst of more funny and intense laughter for all social media users.

Wayne Pearson is a Canadian, who created the acronym LOL in the year 1980. Pearson first used the term in a Viewline chat room with a group of Calgarians during the pre-internet period. Viewline is a local chat network that uses abbreviated language to speed up interaction. The historic event happened with a group of Calgarians having a conversation and humor. Pearson began typing “LOL” instead of “hahaha” as a response to a friend’s joke. In the chat, Pearson’s colleague asks, “what is that?”,  “What is LOL? Casually replied, “laughing out loud.” Unaware that it is going to be something big or valuable in the future.

Do People use LoL for face-to-face Communication?

Is LoL only for textual communication?

Yes, “LoL” is only used for textual communication. However, sometimes it is often used for funny conversations with colleagues. Practically, it is used for textual communication purposes, because an actual or face-to-face conversation easily does not need to provide such shortcuts. Body language and a simple smile or a hard laugh describe it more than the acronym. “LoL” is purposely for textual communication. It is to improve the emotion or how to deliver a textual message or chat. A plain text message is just information the sender gives the receiver, as a convenient way of delivering a message. The receiver of the text isn’t able to know the emotional state of the sender. Sometimes, receiving a message that is capitalized the whole word makes the receiver intensify while reading, thinking that the sender is mad or something. “LoL” brings a lighter mood to the text messaging world. Some say the integration of “LoL” or other internet slang makes text messaging more human.

What do Scott Molski and Silvio Lacetti think about Lol and Internet Slang?

Scott Molski and Silvio Laccetti are the authors of “The Lost Art of Writing”. They stated in their essay that students that use slang statements have a reduced chance of getting employment. According to them, it is going to be unfortunate for the students because their employers are not able to “LoL” on their presented reports that do not have proper punctuation. Including improper spelling, grammar, made-up words, and inappropriate acronyms. Silvio Laccetti is a professor of humanities at the Stevens Institute of Technology. Laccetti and Molski believe that internet slangs such as “LoL” interfere with the proper writing concept. They think that it affects the students after graduating to get a proper job because of the wrong delivery of writing.

What does Linguist John McWhorter think about LoL

John McWhorter thinks “LoL” was revolutionary. As a professor of linguistics at Columbia University and an Author, McWhorter sees nowadays communication is much more fluid, more varied, and subtler, and it is better than before. McWhorter states because of Technology, the introduction of text (SMS), and most of all the growth of the acronym “LoL”, communication thing improves. The “LoL” evolves from involuntary laughter to “It’s alright, I’m fine” and has lots more variation.

Is LoL a Pragmatic Particle?

Yes, “LoL” is a pragmatic particle. Because “LoL” is currently being grammaticized and accepted. It now becomes a marker of empathy and accommodation. Pragmatic particles are words that provide different meanings. The linguist John McWhorter stressed that “LoL” is not nonsense, but not as casual contempt. Different generations created different meanings of “LoL” in their conversations since it has been acknowledged.

When did Oxford English Dictionary accept the LoL Abbreviation?

Oxford English Dictionary accepted the “LoL” abbreviation on March 24, 2011. Along with others such as “crackered”, “wag”, “tinfoil hat” and “OMG”  as well.  There are language purists that have been disappointed with acceptance. The accepted phrases are deemed faulty because they believe it ruins the etymological conversation. Language purists fear that it signals an informal type of expression, and hinders showing the enthusiasm of the writer.

Is the oldest use of LoL on Usenet from the 1980s?

Yes, the oldest use of “LoL” on Usenet is from 1980. It is the year Wayne Pearson created the conversation about “LoL” in a chatroom called Viewline. The “LoL” acronym was used not only on Usenet but globally during that time. Usenet is a global distribution discussion system available on computers. It consists of a set of newsgroups that are categorized per topic. Users publish essays or messages for these newsgroups, then articles are broadcast to other network systems.

What are the Variants of LoL?

Variations of “LOL” include “LOLZ”, “LML”, and “LULZ”. Other acronyms that represent laughter include “LOL” as a commodity of online discussion culture.

Listed below are the variations of LoL.

What are the Derivations of LoL?

Below are the derivations of “LoL”.

The related terms to “LoL” are still based on the concept of “LoL”. It has been added with exaggerated verbs and nouns, such as “ROFL”, “LMAO”, and “ROFLMAO”.  These related terms are frequently used in text, forums, and chats. Most gaming forums use these types of the acronym to react to some memes, express someone’s humor, and even reflect on a personal and funny mistake.

What are the Foreign Equivalents of LoL from other Languages?

The foreign equivalent of ”LoL” from other languages differs in letters, words, or characters, but it provides the same thought. The invention of new words or terms exists in different parts of the world, no matter what place it is. Abbreviations are a popular thing for culture in countries like Japan, Thailand, Portugal, and the Philippines. Though different countries have different languages, it causes confusion for other countries if a message is delivered. An example of a confusing word or internet slang in Thailand has some humorous meaning, but in Chinese, it means sorrow or crying. There are different examples below, to know more about different variations of “LoL” or internet slang “Laughing out Loud” in a foreign language.

Listed below are the 10 foreign equivalents of LoL from other languages.

How do Content Writers use LoL for communicating with Customers?

The content writers use “LoL” for communicating with customers on a case-to-case basis. There is content that is intended for a specific genre that SEO Content Writing uses. Identifying the audience is crucial because it determines the content’s relevance. “LoL” is used for content writing to catch the attention of the reader, most millennials catch the humor easily and then get engaged with it through sharing or commenting. “LoL” is inserted into each content, especially for some hilarious content, a comedy, or funny moments where “LoL” is the very root word. The purpose of using “LoL” in the content is to break some tension and express more light to the written content. “LoL” is suggested to be used whenever there are humorous statements. Typically, these are general topics that have gone viral, it is a kind of way of stating a statement that is not really that serious but provides factual information at the same time. The content writer is responsible for providing the best content that is relevant to the website. The writer considers the target audience and searches for the proper keywords to be used for producing relevant content. The content writers are able to be in line with the SEO strategy in order for the website to rank.

Do Social Media Marketers use LoL?

Does LoL a not serious term for SEO Content?

Yes, “LoL” is considered a not serious term for SEO content. However, “LoL” is a term for a not serious subject, because of its meaning. Besides, being a not serious term is not a negative subject for SEO. The “LoL” has existed on the internet since it was born, and the amount of content regarding “LoL” or containing “LoL” is significantly numerously relevant for its category. Almost all content is considered SEO content as long as it is relevant. Concise information is important in SEO content, “LoL” has been part of the internet age ever since and up until now in the social media space. The “LoL” though not a serious term for SEO but is still the best subject for SEO content writing. SEO writing or SEO content writing is the process of writing content based on the algorithmic approach in order to rank the page and be recommended on the search engine results page. The process involves keyword research as well as the E-A-T, providing the best-quality content that is relevant and integrating the headers to be optimized for easy page crawling. E-A-T stands for Expertise, Authoritativeness, and Trustworthiness is what a page possesses as it is included in Google’s search quality evaluator’s guidelines.