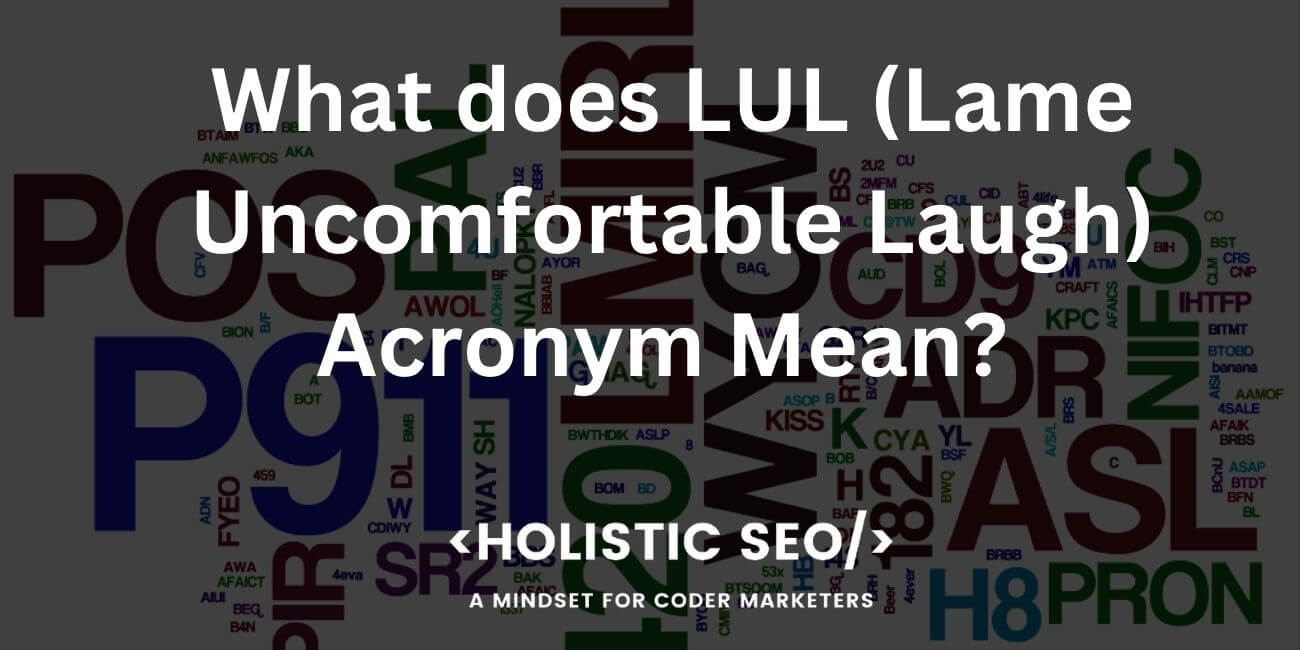 “LUL” is an acronym for “Lame Uncomfortable Laugh.” The word expresses an uncomfortable laugh whenever there is an awkward situation, or someone has heard an unpleasant and lousy joke. “LUL” is used for people like friends, loved ones, or family members. “LUL” must be used when people feel uncomfortable with a joke or content, whether they are not funny and entertaining or just offensive. Meanwhile, LUL must not be used for academic papers, professional discussions, and SEO serious content when achieving formality. “LUL” impacts reliability and negatively affects the serious and formal context of the content. What does LUL text mean? The text “LUL” is an internet slang made to describe a lame, uncomfortable laugh in a shortened and convenient way. People on the internet, who encounter unpleasant content intended to be funny or a bad joke, usually indicate their emotions using the word LUL.

Many people engage on social media platforms as the internet grows. Thus, several mistakes and misinterpretations are always happening, such as “LUL” being used interchangeably with “LoL” despite having different spellings and meanings. What are the differences between “LoL” and “LUL” difference? The difference between “LUL” and “LoL” is that the first talks about having an uncomfortable laugh after hearing or reading an unpleasant joke or content. Meanwhile, the second one stands for “Laughing out Loud,” which is used to express a sudden burst of loud laughter that is not represented by a smile or simple laugh whenever a person encounters a funny joke or content. Additionally, there are “LUL” and “ROFL” differences as well. “While LUL” expresses discomfort, “ROFL” or “Rolling On The Floor Laughing” conveys a solid and intense laugh, even more, potent than “LoL.” The three words, namely “LUL,” “LoL,” and “ROFL,” are all part of a modern way of communication on the internet called internet slang. Internet slang is an unofficial language commonly used to communicate on the internet. It has no rules or proper structure; thus, it has no formality and must not be used for formal and serious papers and content. Internet slang is a common language used to create internet memes. An internet meme is a set of content that is usually abstract, humorous, inspiring, and enjoyable. An internet meme is spread on any social media platform through media such as photos, videos, or introductory text. Internet memes utilize internet slang to express their message to readers and viewers.

The abbreviation “LUL” or “Lame Uncomfortable Laugh” was created by John “TotalBuscuit” Bain in 2014. However, it is not entirely an abbreviation but rather an emote with the “LUL” acronym. “TotalBuscuit” was a popular live streamer on Twitch. LUL was conceptualized and made for Twitch, an interactive live-streaming platform on the internet. John made LUL express laughter and enjoyment inside the platform whenever John was streaming. Other users have used “LUL” on Twitch since then. It has become the most popular emote on the platform.

Do People use LUL for face-to-face Communication?

Is LUL only for textual communication?

What do Internet Slang Experts think about LuL Abbreviation?

Internet slang experts consider internet slang abbreviations, including “LuL,” as helpful tools for advertising and SEO content writing. Internet slang, such as the “LuL” abbreviation, is stereotyped as meaningless and useless in providing information. Still, it turns out that it adds spice to the overall quality of the work. “Internet slang in advertising significantly increased audience attention compared with standard language but negatively affected brand and product evaluation when used excessively,” according to Liu et al., in their study entitled, Good Slang or Bad Slang? Embedding Internet Slang in Persuasive Advertising.” “LuL” is part of the internet slang, which indicates that the “LuL” abbreviation boosts the engagement of advertising and content writing if used appropriately. However, when an advertisement or content is filled with a lot of internet slang, such as “LuL,” it causes harm. “LuL” is allowed to be used in social media marketing and SEO content writing as it catches people’s attention. Disseminating information to the audiences and readers does not have to be formal and conventional. Thus, internet slang is recommended to increase relevance and interaction.

Is LUL a Pragmatic Particle?

No, LUL is not a pragmatic particle. Until now, despite the frequent usage of LUL all over the internet, it is still not accepted and recognized, which means that the word LUL is not being grammaticalized yet. There are no language experts that are focusing on LUL at the moment. Hence, the word’s slow development, acceptance, and recognition. Internet slang experts are much more focused on LOL as it is the most common among all internet slang.

When did Oxford English Dictionary accept the LUL Abbreviation?

Oxford English Dictionary has not yet accepted the “LUL” abbreviation since its introduction in 2013 and 2014. “LUL” is still not listed as one of Oxford’s formally recognized words, unlike other internet slang, such as “LOL,” which was accepted on March 24, 2011. The reason behind the situation is that “LUL” still has no actual definite meaning as of now, and it is less used compared to “LOL.” “LUL” is usually utilized as a substitution for LOL rather than a different word that describes another meaning. “LUL” as well is interpreted as “Love You Lots” in other countries, which causes another factor for misinterpretation and misuse, resulting in “LUL” having no universal meaning. Dictionaries do not accept words that have no fixed and precise meaning.

What is the oldest use of LuL on the internet?

The first and oldest recorded use of “LUL” on the internet was in June 2013, but it was used to express “Love You Lots” instead. The contextual usage of “LUL” to express laughter was in 2014 and was initially named Cynicallaugh. “LUL” was used by “TotalBuscuit” or John Bain on Twitch’s online streaming software platform. John used “LUL” to indicate intense laughter, which later became a popular expression on the forum.

What are the Variants of LUL?

LUL is just one of the thousand words under internet slang. The word LUL has a lot of similar words or variants that mostly only differ in spelling but have almost the same meaning and expression in the context of internet slang.

Listed below are the variants of LUL.

What are the Derivations of LUL?

Listed below are the derivations of LUL.

What are the Foreign Equivalents of LUL from other Languages?

“LUL” or “Lame Uncomfortable Laugh” despite being internet slang, has its foreign equivalents. In today’s generation in which almost all countries have access to the internet, every race and nationality is already on the online platform. Thus, the different languages and expressions are welcomed and have foreign equivalents.

Listed below are the foreign equivalents of “LUL” from other languages.

How do Content Writers use LUL for communicating with Customers?

Content writers use LUL to express their embarrassment or discomfort whenever they tell bad jokes in their content. These bad jokes are not insulting but rather lack a laughable factor. What is a content writer? A content writer is a person who is tasked to write relevant and valuable articles that contain different kinds of information based on the topics and target audience. They do editing, planning, researching, and writing to produce content. Content writers publish their articles on digital platforms. The objective of including LUL in SEO content writing is to give more twists and fun to the entertaining topic being written. It is used as well to relay a message without having to write long sentences. However, it is important to note that content writers only use LUL when necessary. Content writers do not usually use LUL even if their content is funny and entertaining, as it affects the content’s capability to be understood easily. They prefer to describe the scenario in detail so that users and readers understand the content immediately.

Do Social Media Marketers use LUL?

Meanwhile, LUL is used as well on other platforms such as Twitch. How to use LUL in Twitch? There are two ways of using LUL in Twitch, the first one is via typing, and the second one is by opening the remote box. The first way of using LUL is by directly typing the word LUL in the chat section, and as soon as the emote pops up, the user sends it immediately. On the other hand, the second way of using LUL is by purposely pressing the emote box and choosing the LUL to emote. After the LUL has been put into the chat section, it is ready to be sent.

Does LUL a not serious term for SEO Content?

Yes, LUL is not a serious term for SEO content. A not serious term is used to describe things that lack formality, and structure, and mostly aim to provide fun and entertainment. SEO content writing refers to the writing and publishing of content in a digital platform to disseminate information to a wide range of people across the globe. Although LUL is not a serious term for SEO content, it is allowed to be used for funny and entertaining content writing. Content writers must use LUL to describe briefly what they are trying to convey to the users and readers. However, they must as well be aware that excessive usage of LUL destroys their content’s E-A-T, relevance, and capacity to be understood.

What is the difference between LuL and LoL?

The difference between LuL and LOL is that the first refers to a laugh with discomfort, while the second indicates laughing loudly. LuL, or “Lame Uncomfortable Laugh,” is used when a person does not have a good impression of a joke or content that is supposed to be funny. LUL is used by people for sarcasm when they get offended or for respect when they do not want the other person to feel bad after sharing a lousy joke or content. On the other hand, LoL is used for laughing loudly and firmly. It is intended to let someone know how funny the mark or the content is. LoL is both for authenticity and sarcasm.