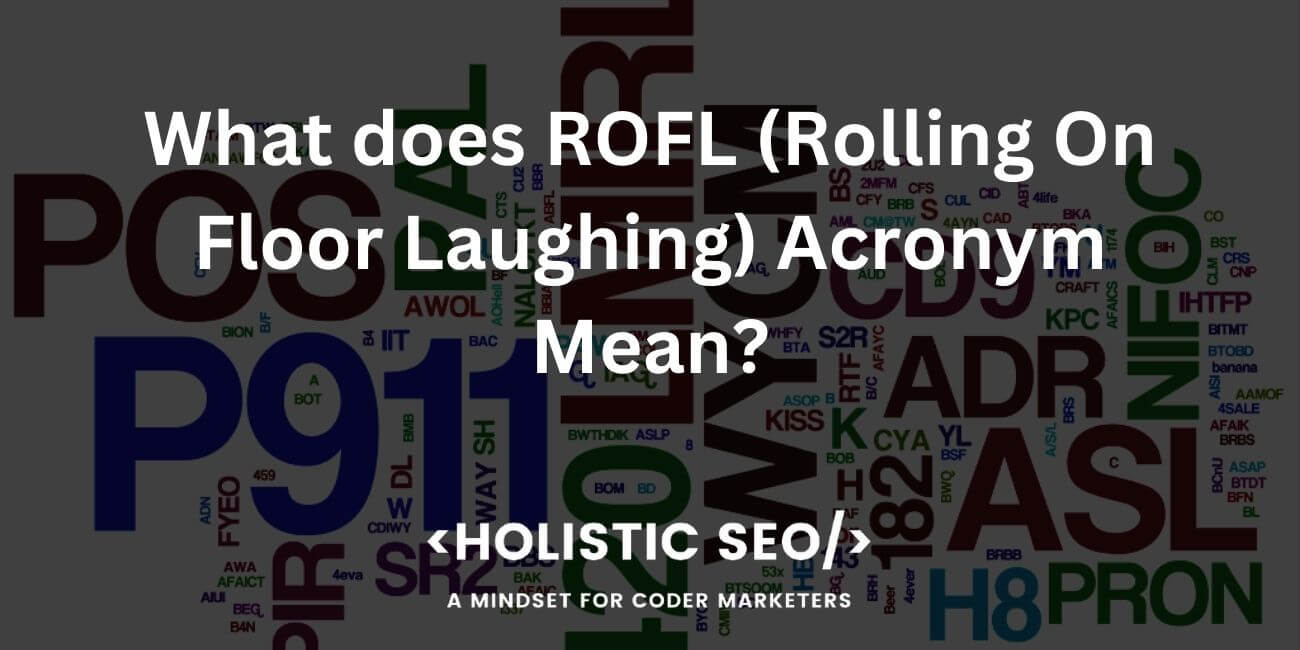 Nowadays, various abbreviations are used by younger users online. One of these is ROFL. What does the text ROFL mean? The ROFL acronym stands for “Rolling On Floor Laughing.” ROFL is an internet meme born in the 1980s. The ROFL word is an Internet slang and meme that indicates someone found something funny. Internet slang refers to the unofficial and unconventional language used by internet users to interact with one another. Internet language includes all these abbreviations that most younger users use. Some of which are LOL, ROFL, and LMAO. On the other hand, the standardized definition of internet slang is challenging to come up with because internet slang is continually evolving. An Internet meme is defined as a practice, idea, phrase, or piece of media that becomes well-liked and spreads quickly online. Social networking websites and blogs that post and repost popular memes propel an internet meme along by reinforcing the meme’s popularity. ROFL is brought to the next level by associating someone laughing, rotating like a helicopter with the internet meme, ROFLCOPTER. Moreover, ROFL is quite similar to LOL. The words indicate that something is funny. However, ROFL and LOL have a difference. ROFL is when someone finds something extremely funny. It is an exaggerated term for LOL, mainly because LOL is when someone finds something funny but not as much. ROFL and LOL are informal terms and must only be used in casual conversation. Not many people know what these abbreviations stand for, especially the older ones. There is a tendency for them not to understand it if abbreviations such as ROFL are used. Nonetheless, ROFL is allowed to be used in content writing as long as the keyword is relevant to the topic. Otherwise, ROFL must be omitted to maintain professionalism and be understood by most online readers.

The first known use of the term ROFL was in an internet conversation on Uneset, according to Own3d. Usenet, or User’s Network, is one of the oldest forums on the internet. Usenet was greeted by two students, Tom Truscott and Jim Ellis, in 1979.  Usenet allows users to create forums online wherein they are allowed to share ideas and opinions about certain issues. ROFL was first used by someone named Chuq through Usenet in 1989 when he found another user funny because the user does not know the term Read the Fucking Manual (RTFM).

Do People Use ROFL for face-to-face Communication?

Is ROFL only for textual communication?

Is ROFL a Pragmatic Particle?

Yes, ROFL is not a Pragmatic Particle. ROFL has been accepted by various dictionaries, such as Oxford English Dictionary because people constantly use it. Pragmatic particles are known as discourse particles. Discourse particles are used to introduce a new topic or go back to the earlier topic. It helps structure the communication process and embed utterances into the communicative context. The basic idea of the particle is to add context to the sentence, expressing a mood or indicating a specific action. However, it has an intrinsic meaning and fits into other grammatical categories.

When did the Oxford English Dictionary accept the ROFL Abbreviation?

Oxford English Dictionary (OED) accepted the ROFL abbreviation in June 2016. OED is considered an acknowledged expert in the English language. It is very different from other English dictionaries mainly because OED focuses on present-day meanings of the words. The history of individual words and the language is found. Oxford English Dictionary (OED) releases updates about new words added to the dictionary each month per year. Based on the OED June 2016 update, more than a thousand words were added along with ROFL. Oxford English Dictionary defines ROFL as “roll or rolling on the floor laughing.” It is used to express that the speaker or writer found something funny.

Is the oldest use of ROFL on Usenet from the 1980s?

Yes, the oldest use of ROFL on Usenet was from the 1980s. The first known use of ROFL on the internet was during a conversation on Usenet in 1989. USENET is a worldwide system established in 1979 for Internet forums with a set of newsgroups organized by subject. Users are allowed to share their ideas and opinions with the newsgroups. Forums are broadcast to other computer systems through the Internet.

What are the Variations of ROFL?

Listed below are the variations of ROFL.

What are the Derivations of ROFL?

Listed below are the Derivations of ROFL.

What are the Foreign Equivalents of ROFL from other Languages?

Listed below are the Foreign Equivalents of ROFL from other languages.

How do Content Writers use ROFL to communicate with Customers?

Content writers use ROFL to communicate with customers easily. Abbreviations like “ROFL” are mostly suitable for a younger audience. ROFL is the short term for “Rolling On Floor Laughing.” Nowadays, instant and fast communication is getting popular. People use shortened terms and words to communicate easily with each other. The same goes for Content writers, who use appropriate words to communicate effectively. Content writers write depending on who their target audience is. They are sometimes allowed to use informal terms to be relatable and understandable in today’s generation. Content Writers are online storytellers for their brands. They deliver helpful, meaningful, and informative messages to their audience while observing Search Engine Optimization (SEO) content writing practices. People aged 18 to 34 use the Internet most of the time, according to the statistics. It is only essential for Content Writers to be allowed to use words that are relatable to these audiences and their target audiences. By writing and publishing articles, content writers aim to convey information to their readers and viewers. SEO content writing does not just revolve around the conventional way of spreading knowledge and information. Some topics need to be written using internet slang, such as ROFL. For the topic to be interesting, the content writer must add some information between the sentences to gain relevance and let the readers absorb what they are reading better. Additionally, it does not bore them out but rather keeps them entertained. Writing entertaining and funny content using language with a full formality is inappropriate as it affects the interests of its readers. However, it is important to note that using too much internet slang, such as ROFL, is not good for Search Engine Optimization (SEO) content writing because the content is going to seem exaggerated. ROFL is exclusive for entertaining and funny content and must not be used for articles requiring serious and formal sentence structure.

Do Social Media Marketers use ROFL?

Is ROFL not a serious term for SEO Content?

Yes, ROFL is not a formal term for Search Engine Optimization (SEO) Content. SEO Content Writing is the process of producing and publishing content that helps a website page rank top in search engines, such as Google. The primary purpose of SEO Content writing is to create high-quality, keyword-focused content that ranks well in search engines to generate natural traffic to a website. Articles must be written with expertise, authoritativeness, or trustworthiness (E-A-T) in Search Engine Optimization (SEO). Using ROFL in SEO content writing is still applicable even if it is not a serious term. It is allowed to be used when the target audience is younger ones who will most likely understand the term. Moreover, abbreviations like ROFL are allowed to be used when the topic is explaining such abbreviations. On that note, ROFL is allowed to be part of Search Engine Optimization (SEO) content as long as it is relevant to the topic or content.