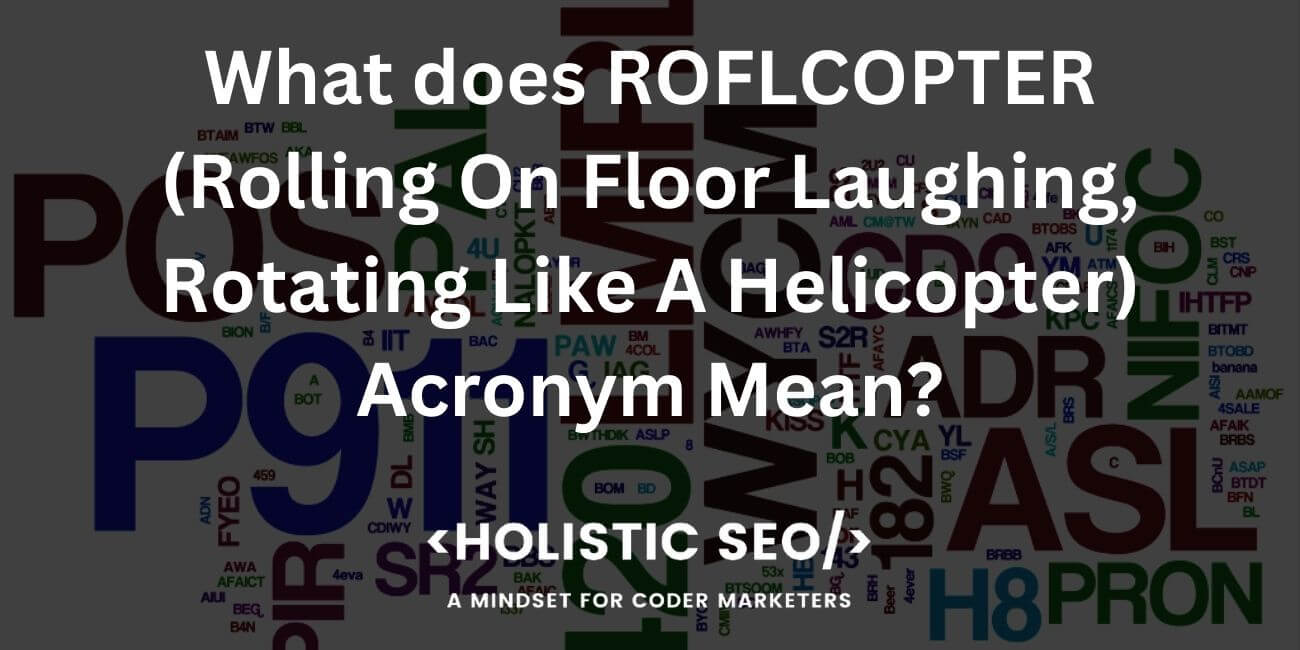 One of the abbreviations and acronyms used by younger users online is ROFLCOPTER. What does text ROFLCOPTER mean? The ROFLCOPTER acronym stands for “Rolling On Floor Laughing, Rotating Like a Helicopter.” It is an internet slang and meme created in the 2000s. Internet slang refers to the unofficial and unconventional language used by internet users to communicate with others. An Internet meme is defined as a practice, idea, phrase, or picture that becomes well-liked and famous. Social media sites are full of posts wherein users repost popular memes and internet slang to share with other people. ROFLCOPTER is an exaggerated version of Rolling On Floor Laughing (ROFL). The only ROFLCOPTER and ROFL difference is the intensity of their laughter. ROFL means that someone finds something funny but not that hilarious. ROFLCOPTER expresses extreme laughter that makes someone rotate like a helicopter’s propeller. ROFLCOPTER is used when someone finds something extremely funny. It is believed that ROFLCOPTER started in the Warcraft forum. Nonetheless, the words ROFL and ROFLCOPTER are used as an expression if someone finds something amusing.

ROFLCOPTER, an acronym for Rolling On Floor Laughing, Rotating Like a Helicopter, was created by the administrators of World Warcraft III: Frozen Throne in their 2003 forum. World Warcraft III: Frozen Throne is a computer game allowing users to play offline and online with friends. ROFLCOPTER was associated with the “gyrocopter,” a flying machine hero found in the game. It was said on the forum that an attack from the hero makes a player Rolling On Floor Laughing (ROFL). Players frequently mass-build the gyrocopter to annoy players. Additionally, a ROFLCOPTER Ink website went live a year after the abbreviation was first used and created. The image of the website has continued to circulate online and has appeared more than once even though it is no longer active.

Do people use ROFLCOPTER for face-to-face Communication?

Is ROFLCOPTER only for textual communication?

Is ROFLCOPTER a Pragmatic Particle?

No, ROFLCOPTER is not a pragmatic particle. The abbreviation still needs to be accepted and recognized by dictionaries despite the frequent usage of ROFLCOPTER. Additionally, ROFLCOPTER still needs to be grammaticized. There are no language experts that are focusing on ROFLCOPTER at the moment. Hence, the slow development, acceptance, and recognition of the word make it a non-pragmatic particle. Internet slang experts are much more focused on Laughing Out Loud (LOL) as it is the most common internet slang. Internet slang that is shorter, easy to decipher, frequently used, and easily understood by general users is likely to become a pragmatic particle. Lengthy and complicated internet slang, such as ROFLCOPTER, in contrast, is going to take time before it gets recognized by many people.

When did the Oxford English Dictionary accept the ROFLCOPTER Abbreviation?

Is the oldest use of ROFLCOPTER on Usenet from the 1980s?

No, the oldest use of ROFLCOPTER was during a forum in 2003. ROFLCOPTER was coined by the administrators of the World Warcraft III game in the same year. The ROFLCOPTER abbreviation is one of the newest internet slang that emerged during the beginning of the 21st century. ROFLCOPTER’s creation is inspired by the acronym’s predecessors, such as “ROFL” and “ROTFL.” However, the internet slang that was first used on Usenet in the 1980s is the Laughing Out Loud (LOL) acronym and not the ROFLCOPTER abbreviation. Usenet is a global-distributed discussion system that a computer is allowed access to. The concept of Usenet was developed in 1979 by Tom Truscott and Jim Ellis. It was launched in 1980 and is an early decentralized computer network for newsgroup-based file sharing and debate on specific topics.

What are the Variations of ROFLCOPTER?

Listed below are the variants of ROFLCOPTER.

What are the Derivations of ROFLCOPTER?

Listed below are the derivations of ROFLCOPTER.

What are the Foreign Equivalents of ROFLCOPTER from other Languages?

Listed below are the foreign equivalents of ROFLCOPTER from other languages.

How do Content Writers use ROFLCOPTER to Communicate with Customers?

Do Social Media Marketers use ROFLCOPTER?

Is ROFLCOPTER a not serious term for SEO Content?

Yes, ROFLCOPTER is not a serious term for Search Engine Optimization (SEO) content. It is an informal term used to describe things that lack formality and structure. It mostly aims to provide fun and entertainment. SEO content writing refers to the writing and publishing of content in a digital platform to disseminate information to a wide range of readers across the globe. ROFLCOPTER is allowed to be used for funny and entertaining content writing, although it is not a serious term for SEO content. Content writers must use ROFLCOPTER to describe briefly what they are trying to convey to the users and readers. However, they must be aware that excessive usage of abbreviations, especially internet memes and internet slang such as ROFLCOPTER, destroys the content’s Expertise, Authoritativeness, Trustworthiness (E-A-T), relevance, and capacity to be understood.