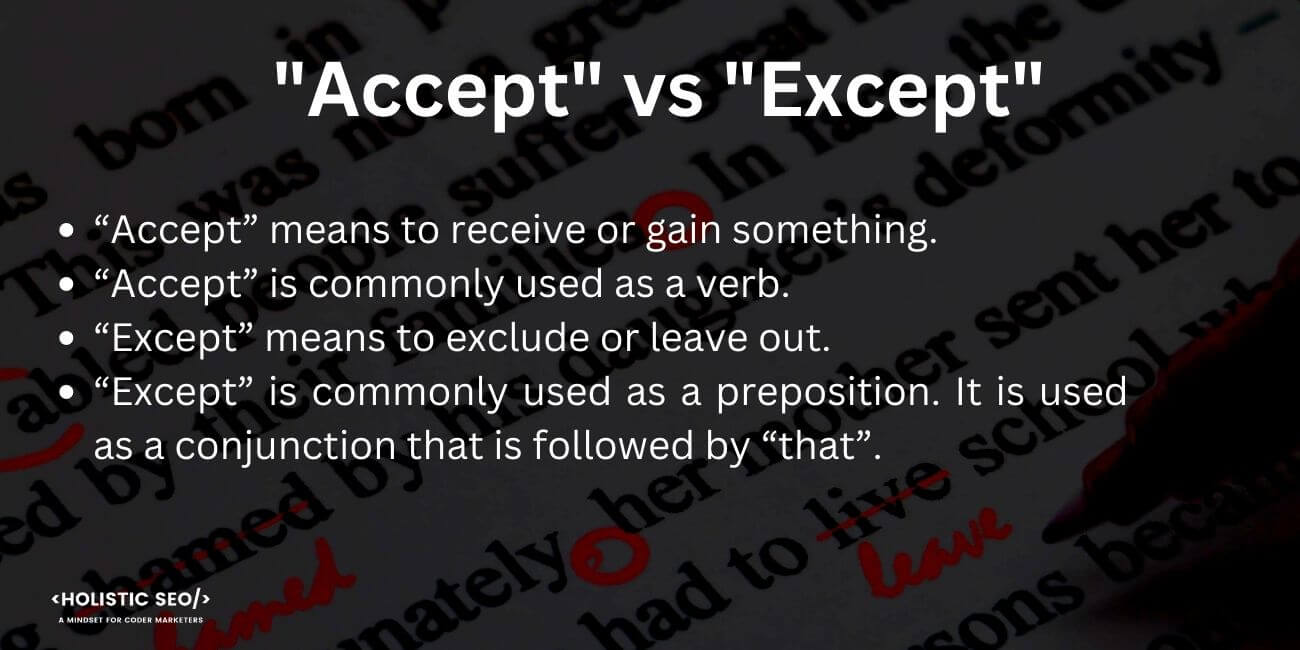 The word “Accept” is defined as consent to receive or acquire something. It is a common word that is often interchangeably used with the word “except”. The word “except”, on the other hand, means not including or other than. These words sound alike, but they have a slight difference in their spelling. “Accept and Except” is commonly misused in English. “Accept and Except” are confusing words to use in a sentence. It has something to do with their spelling and the way they pronounce them. One has encountered getting confused using these words, “Accept vs. Except”, which word to use in a particular sentence? The answer is that it depends. “Accept or Except”, are both common English terms used every day. The word “Accept” is used when conveying a message that demonstrates receiving or gaining something. The word “Except” is used when a sentence is conveying to exclude something in a specific category or group. It is important to note the difference between the two words. Accept and Except are just a few of the numerous English words that are usually misused

Listed below are the differences between the words “Accept” and “Except”.

“Accept” and ‘Except” sound alike, but when used in a particular sentence conveys a totally different meaning. Always remember their proper spelling when using these two words. These words have almost the same spelling, they only differ in their first two letters. These words present a different message to the reader when used interchangeably. Here are sample sentences to differentiate the proper usage of the words “Accept” and ‘Except”. Sample sentence of the word “Accept” is “Christine is allowed to accept suitors”. “ The boy accepts the gift from his godmother”. Sample sentence of the word “Except” is “Everything is perfect except for that tiny red spot on my dress”. “There was no one else in the park, except myself”. The sample sentences demonstrate the proper usage of the words ‘Accept’ and “Except”. The first two sentences show that there is something gained or acquired. The sentences that contain the word “except” conveys excluding something from a particular group or category. It is common to misuse several English words, especially if one is not familiar with their true meaning and spelling. The word “alot” is commonly used, however, it is grammatically incorrect. The proper term must be “a lot”, having space between the words “a” and “lot.” “A lot” means “a large number or quantity. These grammatical errors must be avoided because it alters the true meaning of a sentence.

It is essential to remember that a message or information must be right or correct when writing something. Using misused words or incorrect spelling indicates poor writing skills. Authors or content writers must use the proper words and spelling to create quality content in Content writing. No one buys products from a website that contains poor grammar and wrong spelling in their advertising. The words must be chosen correctly and written properly to be able to convey a message. “How can one sell in Marketing if the advertisements are poorly written and with grammatical errors?” Using the appropriate words when writing is essential because it delivers the right information or message one would like to convey.

What does “Accept” Mean?

What are the sentence examples with “Accept”?

Listed below are the sentence examples with “Accept”.

When to use the word “Accept” in a sentence?

The word “Accept” is used in a sentence as a verb. It is often used in situations in which something is acquired. The word “accept” is used when receiving something. One synonym for the word “accept” is “receive”. It is often times mistaken for the word “except.” “Accept” and “except” are two misused words. However, both words are used in one sentence, to differentiate their meaning. For example “Luis told me that he’ll accept all the gifts except Lady’s gift.” From that sentence example, “accept” was used as a verb to indicate acceptance of the gifts, while “except” was used as a conjunction that meant to “exclude” the gift of Mary. The two words have the same sound and almost the same spelling, however, their meanings are the exact opposite.

What are the synonyms of “Accept”?

“Accept” is a word that has several synonyms. Some of these synonyms include receive, obtain, acquire, take, gain, welcome, and others. These words mean to acquire or receive something. The word “accept” is commonly used in the English language, however, it has various synonyms that can be used as an alternative. For example “Samuel welcome (accepts) donations from other people to fund his studies.” Another example is “The server gladly (take) accepts tips from customers.” These words from the sample sentences are used as an alternative for the word “accept”.

What are the antonyms of “Accept”?

Listed below are the antonyms of “Accept”.

How to spell “Accept”?

Is “Accept” a preposition?

What does “Except” Mean?

What are the sentence examples with “Except”?

Listed below are the sentence examples with “Except”.

When to use the word “Except” in a sentence?

“Except” is typically used as a preposition followed by a noun. It means “not including,” “other than,” or “but” in this function. The word “except” when used in a sentence, is usually followed by the word “for”. It is used before a conjunction such as “when” and “if.” The word “except” would mean “but” when used as a preposition. “Except” typically follows the words “that”, meaning “only” or “except for” when used in conjunction. To use the word “except”, note that it means one is taking out something in a particular category. “Except” is a common English word that is used widely every day. “Except” is oftentimes misused and interchangeably used with the word “accept.” “Except” delivers a different message as opposed to its original meaning when used incorrectly. Knowing when to use the correct word is essential when writing. Identifying the correct spelling and true meaning is the key to using a word properly.

What are the synonyms of “Except”?

What are the antonyms of “Except”?

Listed below are the antonyms of ‘Except”.

How to spell “Except”?

The correct spelling of the word “Except” is E-X-C-E-P-T. “Except” means excluding or with the exception of. Most of the time, “except” is misused in a sentence, especially with the word “Accept”. These two words sound alike, but they differ in meaning. “Except” has a spelling that begins with the letter “E.” The second word is the letter “X,” and it ends with the word “cept.” Knowing the correct spelling of a particular word helps a lot in delivering a proper message in a sentence.

Is “Except” a preposition?

Comparison between “Accept” and “Except”

Below are the comparisons between “Accept” and “Except”.

Why are “Accept” and “Except” misused and interchangeably in English?

The reason “Accept” and “Except” is misused and interchanged in English is because of the similarity in sound. “Accept” and “Except” are essentially pronounced with an initial \ik-\ followed by a stressed \-sept\.  Another reason is a similarity in spelling. They only differ with their first two words, “Ac” and Ex”, and both words end with “cept.” It is not unusual that these two words are misused all the time because some people are not good at remembering the correct spelling of a particular word. Others rely, mostly, on the sound of the word. Identifying the difference between “accept’ and “except” is important to deliver the proper message or information.

Are “Accept” and “Except” the most commonly misused English words?

Yes, “accept” and “except” are two of the most frequently misused English words. There are various misused words in the English language. The English language is a tricky one. Oftentimes, there are words that are used interchangeably. These words are often mistaken for spelling and usage. These repeatedly misused words have similar pronunciations, but they have distinct meanings. Other people are finding it hard to identify which is the right one in a given context. Some of the most commonly misused English words, affect and effect, complement and compliment, defence and defense, farther and further, inquiry and enquiry, a lot and allot, your and you’re, principal and principle, and so many more.

What are the other similar Misused Word Pairs like “Except” and “Accept” in English?

The English language has various words that are frequently misused. These words differ in their spelling and meaning. However, they have the same sound when spoken. It is one reason why, mostly, they are misused by many. Some English words have almost the same spelling, which makes them more confusing.

Listed below are other similar Misused Word Pairs like “Except” and “Accept”.

How do Content Writers use “Accept” and “Except” in their articles?

Do Content Writers use “Accept” and “Except” in the wrong way?

No, content writers do not use “Accept” and “Except” in the wrong way. These words are interchangeably used in a sentence most of the time. However, content writers are skilled writers who practice grammatically correct English. Content writers do have the proper knowledge when it comes to writing. They are skilled writers who know how to use proper words in their sentences. One is not able to convey a proper message if one always commits grammatical errors. The English language is full of confusing words that sound the same but are spelled differently. Others commit the mistake of misusing these words because they sound alike. One way of ensuring that there are no grammatical errors in an article is by reading it several times.

Do Misused Words such as “Except” and “Accept” affect SEO and UX?

Yes, misused words such as “Except” and “Accept” affect SEO and UX. Grammatical errors in writing unintentionally change what authors want to convey. It delivers a different meaning to the reader when a word is misused in a sentence. The same thing to misspelled words, a word with the wrong spelling conveys unprofessionalism. It gives the impression that the Author is not knowledgeable enough or doesn’t have the credibility to write quality content. Quality content matters in SEO. Most websites that rank top contain quality written articles or content. Poorly written articles actually hurt a website’s ranking, misspelled and misused words are common grammatical errors by authors. According to polls conducted by some agencies, on average, 59% of consumers would not buy from an online shopping site that had bad spelling and poor grammar. Bad grammar disturbs the flow of one’s writing. It affects the user experience of a reader and causes misinformation.