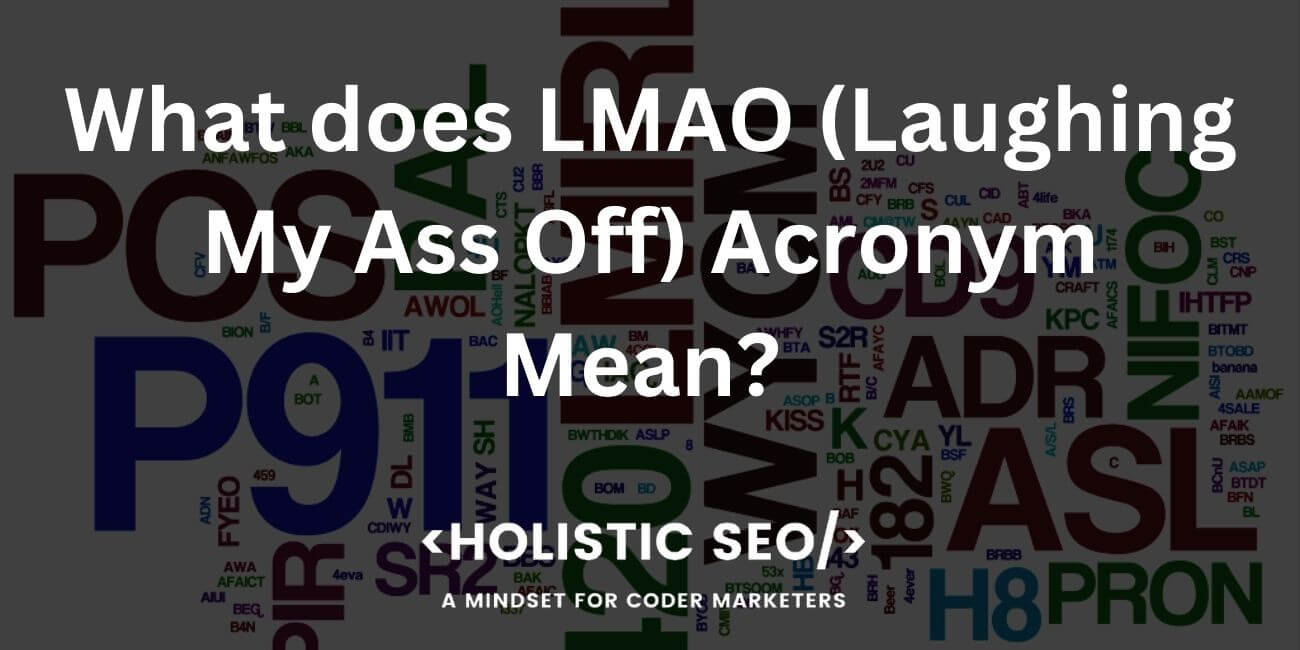 The acronym LMAO stands for “Laughing My Ass Off” that bears the meaning of “having an intense manner of laughing.” LMAO is a modern way of expressing laughter through a brief and convenient yet highly effective way. The acronym LMAO is the more powerful variation of the acronym LOL, and it allows a more expressive, extreme, and louder laugh. An example of a proper usage of LMAO in a context is having an online chat conversation with a friend that has sent a funny content such as a video. The receiver of the video types the word “LMAO” to serve as an immediate response while still being able to express a strong emotion of laughter. The acronym LMAO must be used in casual and daily conversations with close friends or relatives such as telling jokes and discussing embarrassing scenarios. On the contrary, the acronym LMAO must not be used in circumstances where formality or sadness is of great dominance. Some settings or venues that LMAO is not allowed to be used are academic papers, professional emails, job interviews, and eulogies.

What does text LMAO mean? LMAO as a text has exactly the same meaning as the acronym and GIF versions. The text LMAO is a word that is used in written texts such as novels, scripts, and in simple casual online discussions and forums. LMAO text is used by content writers as it is a more accessible and relevant way to deliver the message of certain sentences without having to be excessive with word usage. The LMAO and LFMAO difference is seen on the intensity of the laugh being experienced. The acronym and text LFMAO stands for “Laughing My Fucking Ass Off.” LFMAO means that someone has an extreme and uncontrollable laughter, that is much greater than LMAO. Internet people are fond of adding some words to the existing internet slang to give more emphasis that they are laughing which a traditional internet slang is not capable of expressing. An internet meme refers to the content found and being spread on the internet that contains an entertaining or encouraging meaning to its viewers and readers. Some common examples of internet meme include, photos, videos, and texts. Internet meme uses internet slang as its main source of language. Internet slang are groups of words that are utilized by people on the internet to communicate with each other. It consists of shortened words, acronyms, and abbreviations that indicate a lot of different expressions commonly used to laugh.

There are several claims of the first usage of the LMAO abbreviation including by the author J.D Salinger. J.D Salinger was the first one who made use of the expression in the novel entitled The Catcher in the Rye during the 1950s. The author wants to depict the meaning “to Laugh One’s Ass Off” by using the LMAO abbreviation. Another one claims the first use of the abbreviation LMAO was in December 1990 by AD&D transcript. One of the eleven characters by the player named Torquin, utilized the abbreviation LMAO. LMAO was spread and became more commonly used on the internet and texting platforms in the year the 1990s and was later recognized as an official internet slang.

Do People use LMAO for face-to-face Communication?

Is LMAO only for textual communication?

Is LMAO a Pragmatic Particle?

When did the Oxford English Dictionary accept the LMAO Abbreviation?

The abbreviation LMAO was accepted by the Oxford English Dictionary in 2016. LMAO rose to popularity on the internet and has been one of the most used expressions for laughter by netizens. The abbreviation LMAO has been finally recognized by linguistic experts and was added in the dictionary of Oxford due to its popularity. According to the Oxford English Dictionary, the definition of the word LMAO is an abbreviation for “Laughing My Ass Off” used in chat rooms, emails, and newsgroups. LMAO and LOL are two of the most well-known and recognized internet slang in the world, both by internet people and expert linguists.

What are the Variations of LMAO?

Listed below are the variations of the abbreviation LMAO.

What are the Derivations of LMAO?

Listed below are the derivations of the abbreviation LMAO.

What are the Foreign Equivalents of LMAO from other Languages?

Listed below are the foreign equivalents of LMAO from other languages.

How do Content Writers use LMAO for communicating with Customers?

Content writers use LMAO to communicate with customers in an innovative and modern way. Internet slangs and abbreviations such as LMAO are used by content writers when they want to add some additional entertainment to their conversations with their customers. The abbreviation LMAO allows content writers to convey the laughing emotion they like to deliver in an instant, especially since online conversations take a lot of time compared to face-to-face ones. Content writers nowadays interact with customers more creatively to make them relate to the things they are discussing in SEO content writing. Using words that are just too conventional turn some customers off, mainly because they feel like they are talking to some sort of emotionless AI chatbots.

Do Social Media Marketers use LMAO?

Is LMAO a not serious term for SEO Content?

Yes, the abbreviation LMAO is not a serious term for SEO content. Search Engine Optimization or SEO is the method of writing content that contains relevant keywords, correct information, and optimized sentences to have a higher ranking, earning huge traffic. Content writer must follow the standard of E-A-T to provide high-quality content to readers. The abbreviation E-A-T or known as Expertise, Authoritativeness, and Trustworthiness is relevant to creating quality content because it is part of Google’s algorithm, which helps to rank high in search engines. On the other hand, a “not serious” term pertains to a group of words, phrases, and abbreviations that are mostly nonstandard and used for entertainment purposes. However, even though LMAO is not a serious term for SEO content, it is still being used by content writers and social media marketers in the context of funny and entertaining articles and advertisements. Given that SEO content relies on the relevance of the words being used.