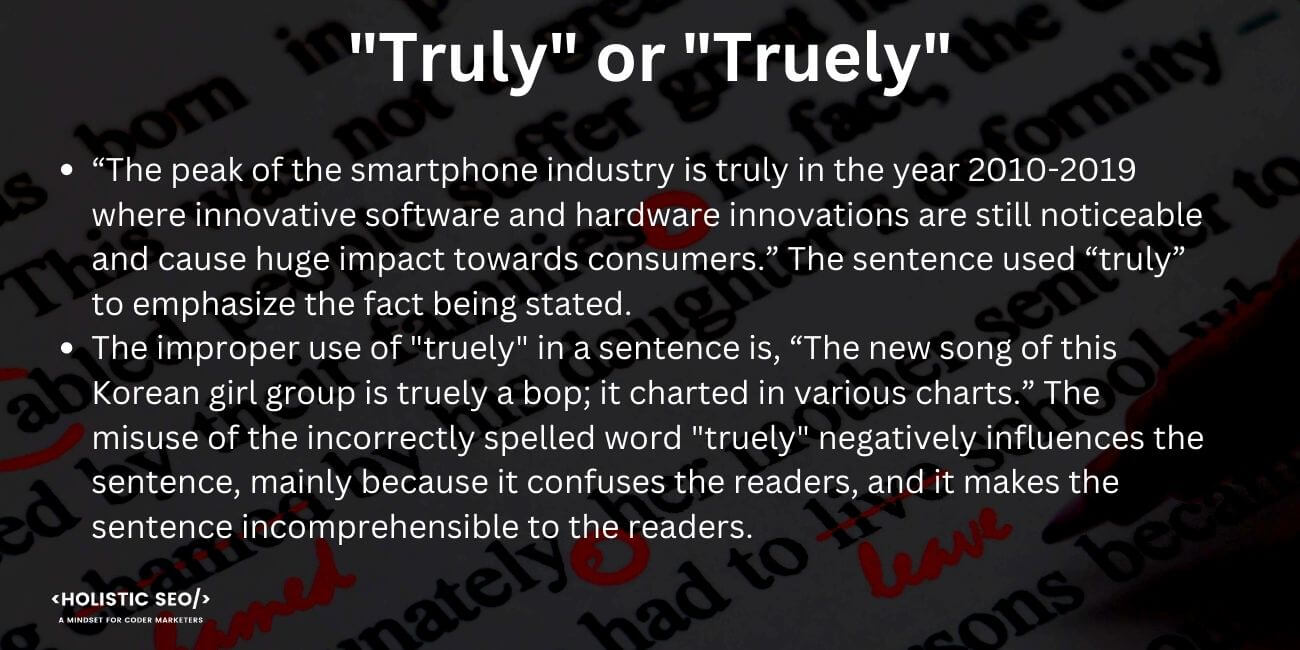 “Truly” is the correct spelling to use, while “truely” is a common grammar error. The word “truly” is the same in the past, present, and future tenses. It comes from the root word “true”, which means a thing or a subject being talked about is accurate, precise, or exact. The correct suffix used with “truly” is “ly”. There are no prefixes for the word “truly.” Using the incorrect spelling, which is the word “truely” in content writing, negatively affects the content or article. It makes the quality of a particular content inferior to its competitors. Misuse of the word hinders the capacity of the content to communicate and interact with its users or readers because it is less comprehensive, and the information is not delivered very well. Therefore, proper knowledge as a content writer and the distinction between “truly” and “truely” when writing is essential. The quality of the content depends on how well-written the structure of each of the sentences is.

Listed below are the example sentences of the correct and incorrect spellings of “Truly” and “Truely.”

Which one is Correct, Truly or True?

The correct word to use is “truly”. The word “truly” is the correct spelling, as seen in dictionaries and reliable textbooks. “Truly” comes from the root word “True,” meaning something is based on fact or in reality. The suffix of “truly” is “Ly”, whereas its prefix is non-existent, mainly because “truly” is only a combination of the root word and suffix only. Some example sentences of the word “truly” includes, “The performance of the cheerleading team yesterday was truly amazing.” The sentence was written with “truly” to emphasize the facts’ accuracy. The statement is less believable without the word “truly” because it lacks emphasis.

How to spell “truely” correctly in the present continuous tense? There is no correct version of the word “truely” in any tenses available in the English language right now. “Truely” is incorrect when spelled in the past, present, present continuous, or future tense. It is not recognized by reliable books, dictionaries, and online articles; thus, it is impossible to spell correctly in various tenses. However, spelling the word “truly” correctly in the present continuous tense is possible. “Truly,” when spelled in different tenses, is still the same; there are no changes, even one consonant or vowel. Do not add the letter “e” because it results in incorrect spelling as it does not follow the basic rules of suffixes.

How to Pronounce “truly”?

What are the Correct Examples of “truly” in Sentences?

Listed below are the example sentences using the correct spelling of “Truly.”

The wrong spelling for the word “truly” is “truely”. “truely” is incorrect because adding suffixes to some English words does not need to write the whole word, some needs to remove letters in the root word, such as the letter “E.” Just remember that “truly” is spelled without the letter “E” due to the addition of the suffix “Ly” to properly recognize the distinction between the correct and incorrect spelling. Having the suffix requires the letter “E” to be removed because it has been able to take over the sound of the vowel.

Which one is Correct, Truly or Truely?

The correct one is the word “truly”. “truly” is correct, mainly because it has been able to follow the rules regarding the proper addition of suffixes. Adding suffixes to the root words has some technicalities and structure to follow. The letter “E” from the root word of “truly” must be removed since the suffix “Ly” is already enough to compensate for the vowel in terms of sounding and pronunciation. “Taylor Swift’s songs are truly excellent from the lyrics up to the discography.” The word “truly” was used to highlight the accuracy or preciseness of the information. The sentence is grammatically correct since the correct spelling of the word is used. However, if “truely” was used incorrectly, the sentence’s meaning is changed, and it becomes incomprehensible for the readers.

“How to Spell Truly and Truely” Correctly in Past Tense?

Listed below are the example sentences of how to spell “truly” and “truely” correctly in past tense.

The verb tenses used in sentences affect the overall structure and meaning of the entire article. The usage of the proper verb tenses enables a smooth flow of information to the readers because incorrect usage of verb tenses alters the meaning. For instance, in the sentence, “Adolf Hitler was truly an evil person because of what he did during the Holocaust.” Using “is truly” instead of “was truly” in the sentence makes it look like the subject is still alive in the present era and currently doing something evil. Hence, verb tenses are very important in conveying information that associates with sequences of events, especially in content writing.

How to Pronounce “truely”?

The pronunciation of the word “truely” is troo-lee. “Truely” is pronounced the same way as “truly” despite their differences in spelling. Similar to “Truly,” the word “truely” has two syllables and is pronounced with two sounds. The first sound is “troo”, which comes from the “True” part of the word. The suffix “Ly” is the second sound and read as “lee.” “truely” is a word that is easy to pronounce and does not need extra sounds to correctly read it.

What is the meaning of Truly?

What is the Etymology of Truely?

How to Use Truly in sentence?

The sentences must be about facts or emphasizing accurate information to use “truly” in a sentence properly. “truly” is a word that deals with real and precise information or discussion. For instance, “Our president is truly competent because he was able to make our country better in just a span of 3 years, which the past presidents were unable to achieve.” On the other hand, there are several synonyms or similar words to “truly” that are found on the internet, such as “truthfully, “honestly”, “frankly”, “accurately”, “correctly”, exactly, and “precisely”, among others.

What are the Synonyms of Truly?

The synonyms of the word “truly” are listed below.

What to Know for Using “truly” and “truely” for Using in Content Writing?

The words “truly” and “truely” have differences and some similarities due to their different spelling. The first word is the correct one, whereas the second word is incorrect since it is a misspelling, a product of error. Hence, the mistake resulted in various distinctions.

The things to know about using “truly” and “truely” in content writing are listed below.

How to Fix Incorrect uses of Truly in Content Writing and Marketing?

Content writers and marketers must be knowledgeable about rules in suffixes and be able to remember their spelling and context to fix incorrect uses of “truly” in content writing and marketing. Skills and knowledge in technicalities and grammar structure are highly required in content writing and marketing. Content writers and marketers must know that in suffixes, the vowels must be omitted when the suffix added does the job of the vowel in terms of sound and pronunciation. For instance, in the case of “truly”, it is already read and pronounced as troo-lee when the suffix is added; thus, “E” is removed. Apart from that, the content writers and markets must not forget the correct spelling of “truly” and which context it is applicable. Intuitive skills are highly accessible; thus, when authors and marketers know immediately how to spell something and what context it must be used, the incorrect uses are significantly lessened.

What are the Other Missspelled Examples similar to “Truly and Truely”?

The other misspelled examples similar to “truly” and “truely” are listed below.

How does Writing “truly” wrong affect SEO and Content Marketing?

The wrong writing of the word “truly” influences SEO and content writing negatively. Writing “truly” wrong in SEO and content writing makes the quality of the content poor. SEO and content writing contains E-A-T which stands for Expertise, Authoritativeness, and Trustworthiness, which is the basis of how good the quality of the content or article is. The E-A-T measures how well a particular article or content is written by its structure and potential to provide useful information to its readers. Poorly written articles due to incorrect usage of words such as “truly” significantly impact the search engine’s ranking. To create excellent quality content, content writers must use the word “truly” correctly and an SEO guide if they aim to get a higher ranking on the search engine.