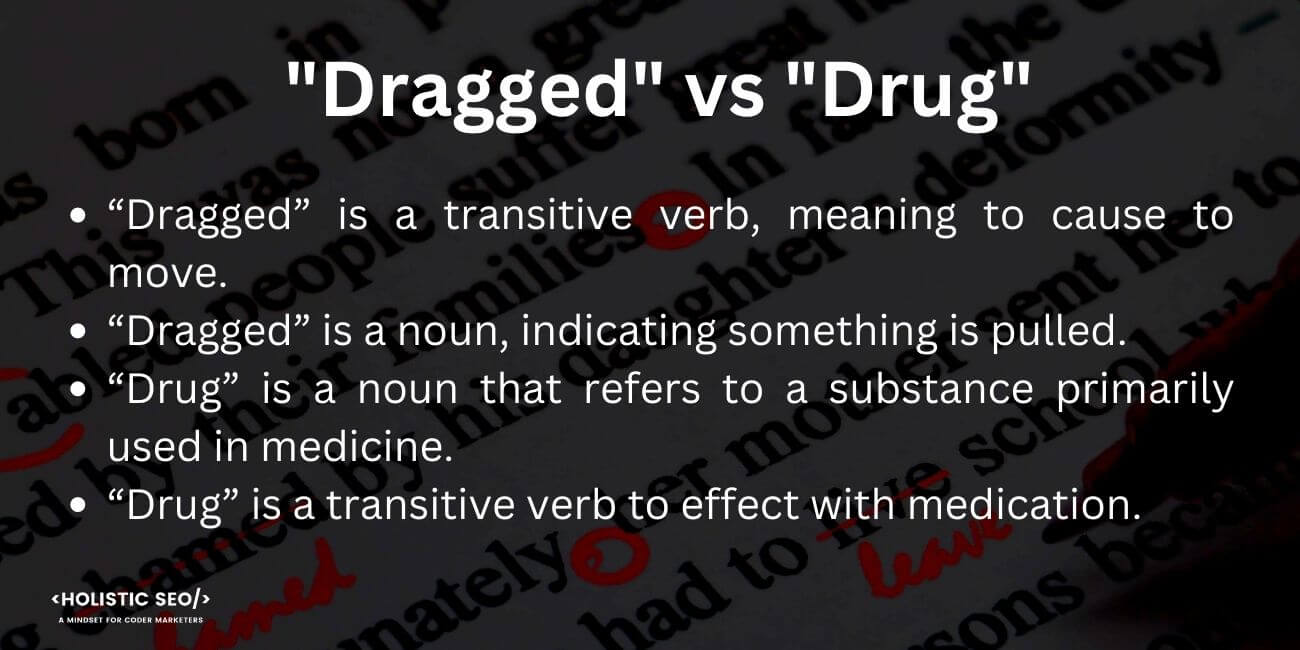 “Dragged” and “Drug” are two words often confused because both seem like variations of the verb drag, which means pull. However, both words have separate meanings and spellings. “Dragged” is the past tense of the regular verb “Drag,” meaning to move something by pulling it along with effort or difficulty. “Drug,” on the other hand, is a medication or any psychoactive substance. “Drug” in its verb form means to administer a drug. Confusing words like “Dragged” and “Drug” are used regularly when communicating. Use the word “Drug” when referring to medicine. Use “Dragged” when referring to the motion of pulling something in the past tense. One must understand and remember their meaning to correctly use both words. Committing grammar and spelling errors is common among people. However, learning each word’s proper spelling and meaning is vital to avoid miscommunication. Many conversations are incomprehensible simply because of incorrect word usage and spelling. Check the dictionary to know the words’ meanings to avoid these mistakes.

Listed below are the comparison between the words “dragged” and “drug.”

Identifying when and which words must be used in a sentence to deliver the correct message or information is essential. Writers understand and study the correct spelling and meaning of each word. Writers know when and how to use words like “Dragged” and “Drug” in writing. Words that look and sound alike are often misused, resulting in spelling and grammatical mistakes. However, these mistakes are avoidable if someone is writing carefully. Writers do proofread to check if there are any spelling mistakes or grammar errors in their articles.

Proper usage of words like “Dragged” and “Drug” in a sentence matters because one must convey factual and accurate information. Some example sentences using the words “Dragged” and “Drug: “Amanda dragged her boots through the mud.” The word “Dragged” in the sentence is used as a verb. One example of a sentence using the word “Drug.” “Drug addiction is one main problem of many countries.”  “Drug” is used as a noun in the sentence example, referring to an illegal substance.

Using the correct terms or words is very helpful in daily life, content writing, and marketing. Words are powerful, especially in marketing because people communicate through words. Marketers use specific and appropriate words to encourage people to buy the product they are promoting. They used informative words to entice and capture the interest of future customers. Using the correct words in marketing has the power to attract customers. Writers must understand why to know the difference between “Dragged” and “Drug” for content writing and marketing. Proper usage of words always matters. Writers must choose their words correctly and write them properly to convey a message. The same thing applies to content writing. Writers must be knowledgeable about the proper terms and words to write good-quality content. Content writers communicate with their readers by writing correct and informative articles.

What does “Dragged” Mean?

“Dragged” is defined as pulling something with difficulty, or drawing with force. “Dragged” came from Middle English draggen (“to drag”), early Middle English dragen (‘to draw, carry”), junction of Old English dragan (“to drag, draw, draw oneself, go, protract”), and Old Norse draga (“to draw, attract”); both from Proto-Germanic dragana (“to draw, drag”), from Proto-Indo_European dʰregʰ- (“to draw, drag”). “Dragged” is the past tense of “Drag” which means “to draw,” and originates from the 14th century. The Oxford Dictionary defines “Dragged” as pulling somebody or something with effort and difficulty. “Dragged” is a common English word used in daily conversation. It is important to understand its proper usage for efficient communication. The word “Dragged” must not be mistaken with the word “Drug” because the latter refers to a medicine or an illegal substance.

What are the sentence examples with “Dragged”?

Below are sentence examples using “Dragged”.

When to use the word “Dragged” in a sentence?

What does “Drug” Mean?

A drug is a chemical substance that changes an organism’s physiology or psychology when taken. Drugs usually are distinguished from food and substances that give a nutritional contribution. The etymology of the word “Drug” comes from Middle English drogge (“medicine”), from Middle French drogue (“cure, pharmaceutical product”), from Old French drogue, drocque (“tincture, pharmaceutical product”). It came from Middle Dutch or MIddle Low German droge, as in droge vate (“dry vats, dry barrels”), mistaking droge for the contents, often dried herbs, plants, or wares. Droge was derived from Middle Dutch drōghe (“dry”), from Old Dutch drōgi (“dry”), from Proto-Germanic draugiz (“dry, hard”), from Proto-Indo_European dʰrewgʰ- (” to strengthen, become hard or solid”), from dʰer- (” to hold, hold fast, support”).  Associated with English dry, Dutch droog (“dry”), and German trocken (“dry”). The Oxford Dictionary defines the word “Drug” as an illegal substance that some people smoke, inject, etc., for its physical and mental effects. “Drug” first appeared in Middle French and English in the late 14th century, without a recorded predecessor. It primarily meant “any substance, of animal, plant, o mineral origin, used as a pharmaceutical ingredient in pharmacy, chemistry, and other manufacturing methods. The word “Drug” is a common English word used by many. Knowing proper word usage is essential because it makes communication easier and more understandable.

What are the sentence examples with “Drug”?

Below are example sentences with “Drug.”

When to use the word “Drug” in a sentence?

“Drug” is used in a sentence when referring to medicine or any illegal substance. The word “Drug” is both a noun and a verb. “Drug”, when used as a verb, means to administer a drug. The word “medicine” is synonymous with “Drug”. Using the word “Dragged” as an alternative for “Drug” is incorrect. “Dragged” is a different word and is not relatable to “Drug.”

What are the synonyms of “Drug”?

The word “Drug” has several synonyms that are used as an alternative for the word. Some synonyms of “Drug,” when used as a noun, include medicine, antidote, potion, remedy, cure, narcotic, stimulant, and medication. “Drug,” is synonymous with poison, narcotize, and anaesthetize when used as a verb. Here are sample sentences using the synonyms of “Drug”: “A former narcotic (drug) dependent happily goes out of rehab today.”  “A new wonder medicine (drug) is available in the market and is known to cure a lot of diseases.”

Are the words “Dragged” and “Drug” interchangeable?

Comparison between “Dragged” and “Drug”

Below is a table comparison between “Dragged” and “Drug”.

Listed below is the table that shows the comparison between the words “who” and “whom.”

Why are “Dragged” and “Drug” misused and interchangeably in English?

The words “Dragged” and “Drag” are often mistaken for their spelling and usage. “Dragged’ and “Drug” have the same pronunciation, and, understandably, people get confused with them. People rely mostly on the sound of words. The word “Drug” and the term “Dragged” both function as two distinct parts of speech, a noun, or a verb. The words are not related. The confusion comes because of the similarity in pronunciation.

Are “Dragged” and “Drug” the most commonly misused English words?

Yes, “Dragged” and “Drug” are among the most commonly misused English words. However, these misused words affect someone’s delivery of a message. Misused words result in misinformation and confusion. The English language is a tricky one. Frequently, some words are used interchangeably. These words are regularly mistaken for spelling and usage. Some repeatedly misused English words have similar pronunciations but distinct meanings. Other people find it hard to identify the right one in a given context. Some commonly misused English words are “it’s and its”, “affect and effect”, “complement and compliment”, “farther and further”, “inquiry and inquiry”, “a lot and allot”, “your and you’re”, “principal and principle”, and so many others.

What are the other similar Misused Word Pairs like “Drug” and “Dragged” in English?

Below are other similar Misused Word Pairs like “Drug” and “Dragged.”

What are the things should a content writer consider in using the word “Dragged” and “Drug”?

Content writers take a lot of consideration when writing. They need to consider their audience, platform, and spelling when using the words “Dragged” and “Drug.” Content writers are skilled and knowledgeable writers that follow strict rules when it comes to grammar and spelling. They use words and terms appropriate for their readers to understand their articles.“Dragged” and “Drug” are two words having different meanings.

Can content writers use “Dragged” and “Drug” in one sentence?

How do Content Writers use “Dragged” and “Drug” in their articles?

Do Content Writers use “Dragged” and “Drug” in the wrong way?

No, content writers do not use “Dragged” and “Drug” in the wrong way. Often, these words are interchangeably used in a sentence. However, content writers are skilled writers who practice grammatically correct English. Content writers possess the proper knowledge when it comes to writing. Proficient writers know how and when to use the right words in their sentences. Content writers are not able to convey a proper message if they commit repeated grammatical errors. The English language contains confusing words that sound alike but are spelled differently and have distinct meanings. Others are confused by the words “Dragged” and “Drug” because they sound the same. One way of ensuring that there are no grammatical errors in an article is by reading it several times and understanding the meaning of the words.

Do Misused Words such as “Drug” and “Dragged” affect SEO and UX?

Yes, words such as “Drug and “Dragged” affect SEO and UX. Misused words impact SEO. “Dragged” and “Drug” are sometimes used interchangeably. Understanding the proper spelling of every word is still important to better communicate. Grammatical errors in writing unintentionally alter what authors want to convey. It is either a wrong spelling or a misuse of terms. A misused word in a sentence delivers a different meaning to the reader. The same thing applies to misspelled words, a word with the wrong spelling shows a lack of professionalism and incompetence. Quality content matters in SEO. Most websites that rank high contain good-quality written articles or content. Poorly written articles hurt a website’s ranking, and misspelled and misused words are common grammatical errors made by authors. According to polls conducted by some agencies, on average, 59% of consumers would not buy from an online shopping site with bad spelling and poor grammar. Poor grammar disturbs the flow of one’s writing. It impacts the user experience of a reader and causes misinformation and misunderstanding.