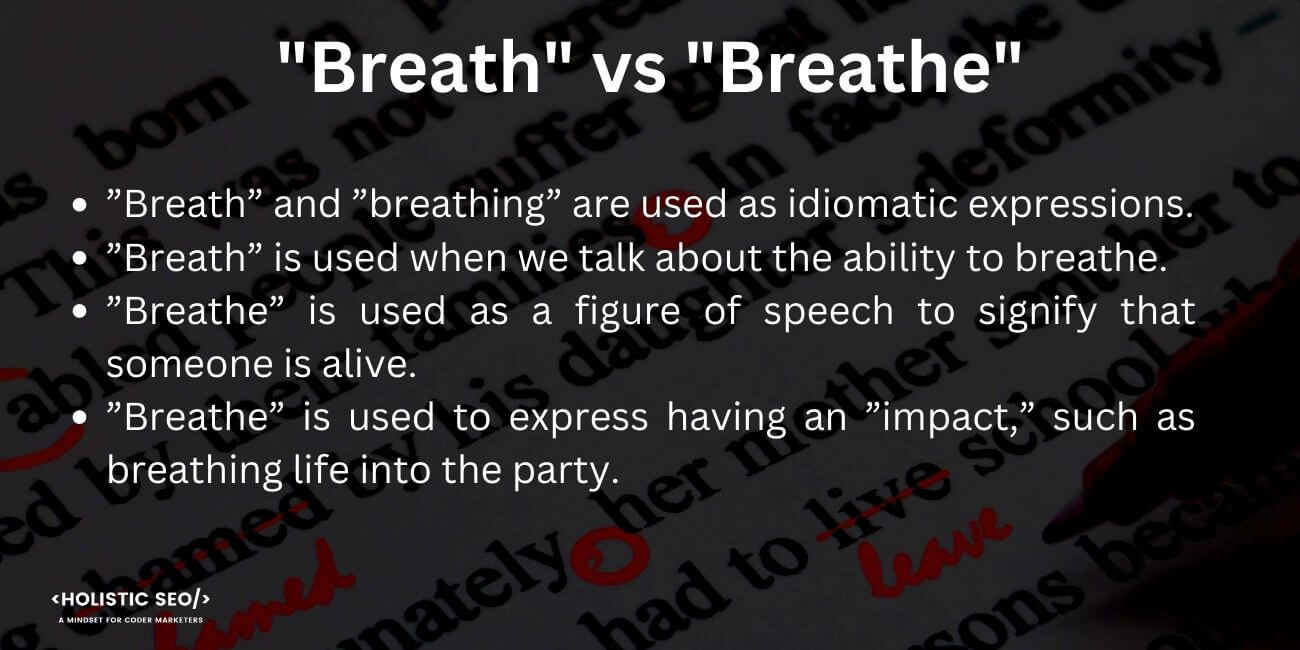 “Breath” and “breathe” are two of the most commonly misused words in English. These words are often confusing because they are easily misspelled. The words “breathe” and ”breath” have almost identical spellings and share related meanings. The term ”breath” is a noun that describes a thing, person, or place. It refers to the air that the lungs take in. Meanwhile, the word ”breathe” is a verb that refers to action. It is the act of inhaling and exhaling air. The word ”breathe” is used as an act to let the air pass through a particular thing, such as clothes, to keep them fresh.

The differences and comparisons between ”Breath” and ”Breathe” are listed below.

The words ”breath” and ”breathe” are usually interchanged since the only difference is the letter e at the end. ”Breath” is used as a noun or reference to the air. It is a representation of when a person feels overwhelmed and needs to take relaxation. ”Breathe” is always used as a verb or a process of inhaling and exhaling. These words are both used in several ways and are part of many phrases and idioms.

Some example of the word ”breath” is ”Each insight is a breath of fresh air.” “Smoking is the caused of bad breath.” The example sentences are being used to describe something that is related to air. The air that anyone feels outdoors and the air that the mouth is exhaling. Meanwhile, some examples of the word “breathe” include ”Humans cannot breathe underwater.” “He needs to relax and breathe deeply.” The example phrases describe an action word taken in relation to inhaling and exhaling. The word “breathe” is a common verb word that is used to refer to an action being taken under any circumstances.

It is essential for writers why to know the difference between the words “breathe” and ”breath” for content writing and content marketing. Having a better understanding of the concept of each of the words helps the writer communicate clearly and in a healthy way. The more the content is of good quality, the more the readers and audience are likely to trust the content. Credibility and professionalism in the content help the content to rank better.

What does ”Breath” Mean?

The word ”breath” is a noun that refers to the full cycling of breathing and the ability to breathe. ”Breath” came from the Old English word ”bræð,” which means odor, scent, stink, exhalation, and vapor. Another origin is from the Proto-Germanic word ”bræthaz,” which means smell and exhalation. The etymology of the word ”breath” is derived from the Old English, brǣth, of Germanic origin, which is related to brood. It was first used in the 14th century and is neither a part of the top 100 nor the top 1000 most used English words; therefore, it is not a common word. Using the word “breath” properly is deemed essential for daily life to differentiate it from its verb counterpart.

What are the sentence examples with ”Breath”?

Listed below are examples of the word ”breath” in a sentence.

When to use the word ”Breath” in a sentence?

Use the word “breath” to describe the air during exhalation. Some idioms and expressions are used with” breath” to convey emotions in English conversation. There are many synonyms for the word “breath.” However, one commonly misused synonym of the word” breath” is” puff.” On top of that, the term” breath” must be used when talking about a small amount of something, usually wind. It is sometimes used to indicate a break or calm, as in the phrases” take a breath” or” catch a breath.” The literal meaning of the noun” breath” is tied to the exchange of gasses people generally refer to as breathing. Furthermore, a” breath” is used when people speak about the air they breathe in and out during breathing.

What is the difference between ”Breath” and ”Breath of”?

What does ”Breathe” Mean?

The words ”breathe” means to move air into and out of the lungs. It is another way to say the word ”inhale” and ”exhale,” meaning to take something such as ”air” into the lungs through the mouth or nose. The word ”breathe” comes from an Old English vowel of its source word, breath. Furthermore, the word, ”breathe” is first used in the year 1200. It is a very common word, especially in the English language. It is being used widely as an alternative to the words ”inhale” and ”exhale.” On top of that, the word ”breathe” became an important part of people’s lives. It helps in many ways, not just in normal conversation, and writing content, but most especially in saving people’s lives.

What are the sentence examples with ”Breathe”?

Listed below are examples of the word ”breathe” in a sentence.

When to use the word ”Breathe” in a sentence?

What are the synonyms of ”Breathe”?

The word ”breathe” has a lot of synonyms. Some of them are ”respire,” ”puff,” ”gasp,” and ”draw breath.” One of the many used synonyms of the word ”breathe” is ”puff.” Some examples of using the word ”puff” are ”She took a long puff (breathe) at her cigar and began her story.” ”Puff (breathe) of air, as if from the mouth of an exhausted horse.” On top of that, there are some alternative words being used for the word ”breathe.” Some popular words used are ”inhale” and ”exhale.”

How is the pronunciation of ”Breath” and ”Breathe”?

The word ”breathe” is pronounced as ”breeth.” The sound ”breath” rhymes with the word ”seethe.” Unlike the word ”breath,” the ”breathe” word is spoken in a hard way noting that it is spelled with an ”e” on the last part of the letter. Furthermore, when pronouncing it correctly, the position of the tongue tip stays down and the front part of the tongue arches towards the roof of the mouth to pronounce the ”EE” in ”breathe.” Then, the consonant changes to the voiced ”TH,” which is ”Thh– thh.” It’s the same tongue position, but the sound with the vocal cords must be ”Thh–thh” in  ”breathe.”

Comparison between ”Breath” and ”Breathe”

Listed below is the table that shows the comparison between the words ”breath” and ”breathe.”

Why are ”Breath” and ”Breathe” misused and interchangeably in English?

Are ”Breath” and ”Breathe” the most commonly misused English words?

Yes, the words ”breath” and ”breathe” are one of the most commonly misused English words. They are commonly exchanged when writing a sentence because of their almost similarities in spelling, and how both words are related to the air. They often get confused, especially non-native English speakers because they used to use the word ”inhale” and ”exhale” as the variation of the word ”breathe.” Furthermore, even native English speakers have the same problem as non-native speakers. They often mistyped the words and get confused with their definition since both words almost share a common meaning. The only difference between the two is that the native English speaker makes the mistake in written English. A lot of native English speakers are not flawless spellers. They make mistakes, like mixing up these two words with similar spellings and related meanings. Meanwhile, non-native English speakers, sometimes make mistakes both in speaking English and writing English. They frequently used misused English words without knowing their differences and make a whole confusing sentence out of it.

What are the other similar Misused Word Pairs like ”Breathe” and ”Breath” in English?

Listed below are the other similar misused word pairs like ”breath” and ”breathe” in English.

What are the things should a content writer consider in using the word  ”Breath” and ”Breathe”?

Mixing up the words ”breath” and ”breathe” is a really common error. However, there are things to consider that a writer must know in order to avoid getting confused with the words ”breath” and ”breathe.” First, they need to get familiarized with their function. Use the word ”breathe” with an ”e” in the spelled word if the sentence is doing the action (verb) of taking in and letting out air. However, use the word ”breath” if the writer is referring to the thing (noun) that a sentence is talking about taking in and letting out the air. Moreover, to remember their difference, a writer must consider their spelling. The word ”breathe” ends with the letter ”e,” which is comparable to the word ”verb,” which is an action word. Meanwhile, the word ”breath” ending with the letter ”h” is a noun, which means not an action word.

Can content writers use ”Breath” and ”Breathe” in one sentence?

How do Content Writers use ”Breath” and ”Breathe” in their articles?

Content writers use the words ”breath” and ”breathing” in an article when describing a compelling description of the content. Content writers use ”breath” and ”breathe” indicating a moment that shows the readers something about a character in the content. However, it must only be applied to articles like review articles and other types of articles that tell stories. The usage of these words, depending on what the story is about, helps connect the story to the audience in a way that makes sense. On top of that, when it comes to academic, scholarly, and informational content writing, the use of ”breath” and ”breathe” is not common, and the usage only depends on the content.

Do Content Writers use ”Breath” and ”Breathe” in the wrong way?

No, professional content writers are knowledgeable enough to differentiate the words ”breath” and ”breathe.” However, when it comes to other content writers such as beginners, there is a high chance for them to get confused with the words ”breath” and ”breathe.”  Writers make some mistakes and it is inevitable. There is always room for improvement. Some factors to lessen the mistakes are to be aware of that mistakes and make reading a habit. Having good knowledge about what to put and what’s not to put in the content is very important to produce a high-quality article.

Do Misuse of Words such as ”Breathe” and ”Breath” affect SEO and UX?

Yes, the misused of words such as ”breath” and ”breathe” impact search engine optimization and user experience. Incorrect grammar influences the ranking of the content as well as the formality of the business online. A writer must make sure that the search engine optimization (SEO) is strong, direct, and factual. The online content needs to impress the audience and bad grammar and spelling mistakes show the audience that the writers are not detail-oriented. The best way to avoid grammar errors is to proofread and edit the content. It is very important to put the website content through a professional editing process.