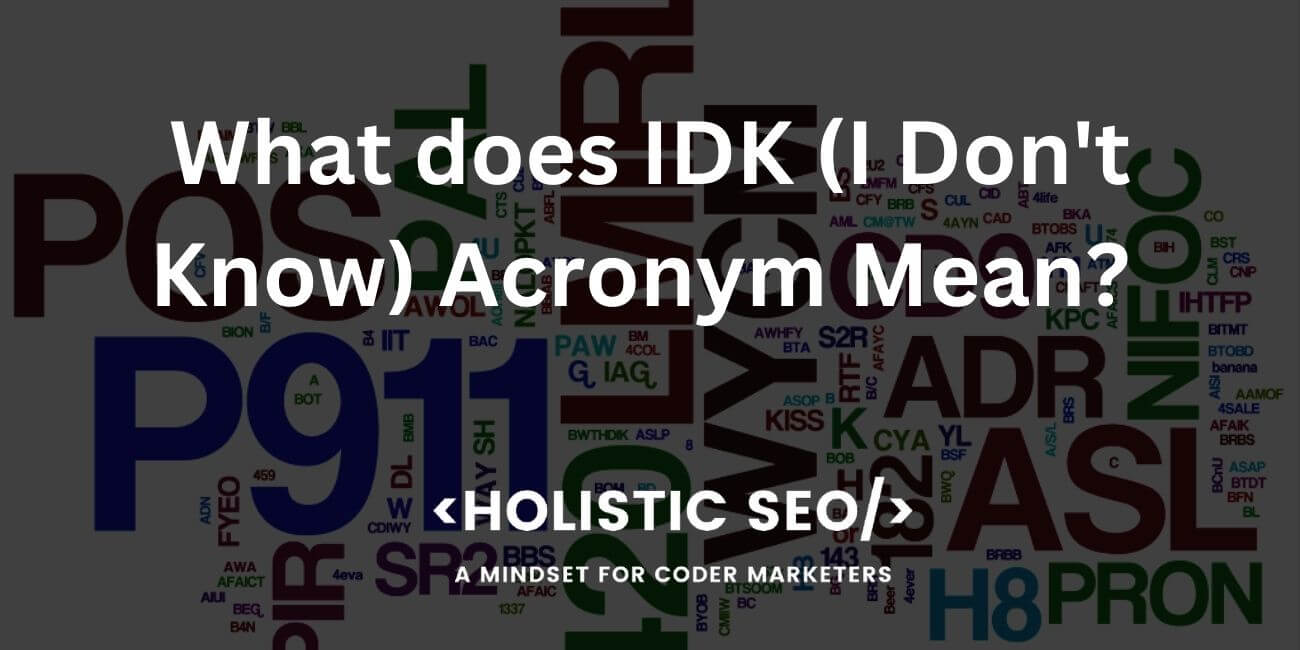 Communication by messages has become very frequent since the appearance of social networks for Internet users. Several expressions and abbreviations have emerged in the digital world since then. People nowadays communicate faster and easier, and that includes the usage of words and slang. Using an abbreviation like IDK or “I don’t know” makes communicating quicker. People use the abbreviation IDK instead of typing or writing the whole term “I don’t know.” The IDK word is confusing, particularly to older people. Millennials use abbreviations when communicating, especially on social media and in text messages. A lot of people belonging to the older generation surely ask, “What does text IDK mean?” An example of IDK is in a sentence, “I should get bread, but IDK if the store is open now.” People have encountered it in a text message, or in a social media app. IDK belongs to the newly developed dialect called text-to-speak, or SMS language. The IDK acronym is typically used in informal conversation. The abbreviation IDK has been part of the text speak since 2002. People have surely encountered the term “IDK” in internet memes and internet slang. Internet memes, normally known as “memes” (mim/ MEEM), are an idea, behavior, style, or image that is spread via the Internet, often through social media platforms. Internet slang, on the other hand, is a non-standard form of language used by people on the Internet to communicate with one another.

The term IDK is usually used hastily in conversation. It is commonly used in text messaging. People need not use the word “IDK” in formal conversations or writing. It denotes a lack of professionalism and seriousness. However, some writers use it for certain topics relevant to the subject, and when their audience is mostly young. Using the IDK when talking to someone, particularly in text messaging, is so much easier. One doesn’t have to type the longer version of “I don’t know” to convey something. However, it is important to note when and how to use IDK. Younger people must not be confused by using the abbreviation IDK, especially in formal writing. Not everyone is familiar with internet slang, IDK at the same time. It is still better to use “I don’t know” when communicating so as not to cause confusion and miscommunication, although IDK is now a popular term. Numerous words have emerged ever since the Internet arrived in the modern world today. It makes communicating instant and faster, however, the proper usage of English words is forgotten.

IDK is among the latest developed lingo called text speak or SMS speech. IDK is mainly used in informal and daily conversations, normally while communicating through instant or text messages. It has been part of text speaks or SMS since 2002 the abbreviation.

When is the IDK abbreviation most commonly used?

IDK is most commonly used in informal communication, such as text messaging. IDK is part of the newly developed dialect called text speak or short message service (SMS) language. Using the IDK abbreviation is most common for teenagers and young adults. The term is widely used on Social Media platforms and online conversations.

Do People use IDK for face-to-face Communication?

Is IDK only for textual communication?

What do Scott Molski and Silvio Lacetti think about AFK and Internet Slang?

Scott Molski and Silvio Lacetti are professors of humanities at the Stevens Institute of Technology. They highly criticized the usage of acronyms, especially for students. In their essay entitled “The Lost Art of Writing”, they state that students who use acronyms have the lowest chance of being employed. Students are not able to construct a proper report with the use of silly acronyms.

What does Linguist John McWhorter think about IDK?

John McWhorter is an American linguist and an associate linguistics professor at Columbia University. John McWhorter specializes in sociolects, creole languages, and Black English. McWhorter has authored books on race relations and African-American culture. According to McWhorter, “Texting isn’t written language”. John McWhorter quote“ Texting is much more closely resembles the kind of language humans have for so many years: spoken language”.

Is IDK a Pragmatic Particle?

Yes, IDK is a Pragmatic Particle. Pragmatic particles are known as discourse particles. They help to structure the communication process and to embed utterances into their communicative context. The basic idea of the particle is to add context to the sentence, expressing a mood or indicating a specific action. Although a particle has an intrinsic meaning and fits into other grammatical categories.

When did Oxford English Dictionary accept the IDK Abbreviation?

Is the oldest use of IDK on Usenet from the 1990s?

Yes, the oldest use of IDK in USENET is from the 1990s. The term ‘ID” was used in a conversation in the USENET newsgroup.  USENET is a worldwide system for Internet forums with a set of newsgroups organized by subject. Users are allowed to post messages and articles to the newsgroups. Articles are then broadcast to other computer systems, mostly now connected to the Internet. USENET was established in 1979. It is one of the oldest network communications systems used up-to-date.

What are the Variations of IDK?

Listed below are the variations of IDK.

What are the Foreign Equivalents of IDK from other Languages?

Listed below are the Foreign Equivalents of IDK from other Languages.

How do Content Writers use IDK for communicating with Customers?

Content writers use IDK to communicate with customers easily. Terms like “IDK” are mostly relatable to a younger audience. IDK is the short term for “I Don’t Know.” Nowadays, instant and fast communication is a thing, especially with high-tech gadgets. People used shortened terms, and words to communicate easily with each other. The same applies to Content Writers; they use appropriate words to communicate effectively. Content writers write depending on who their target audience is. Sometimes, content writers use not-serious terms for them to be relatable and connect to the public. Content Writers are storytellers for their brands. They deliver helpful, meaningful, and informative messages to their audience while observing SEO content writing practices.

Do Social Media Marketers use IDK?

Does IDK a not serious term for SEO Content?

Yes, IDK is not a formal term for SEO Content. SEO Content pertains to creating content that helps a website page rank top in search engines.  SEO Content concerns everything that relates to writing and content building on a website. The primary purpose of SEO Content writing is to create high-quality, keyword-focused content that ranks well in search engines to produce natural traffic to a website. Articles must be written with expertise, authoritativeness, or trustworthiness (E-A-T), in SEO. Using IDK is still applicable, although it is not a serious term. Using not serious terms is allowed in SEO Content, as long as it is relevant to a particular subject or article.

What are some sentences that use the abbreviation IDK?

Listed below are three examples of sentences using the IDK Abbreviation.