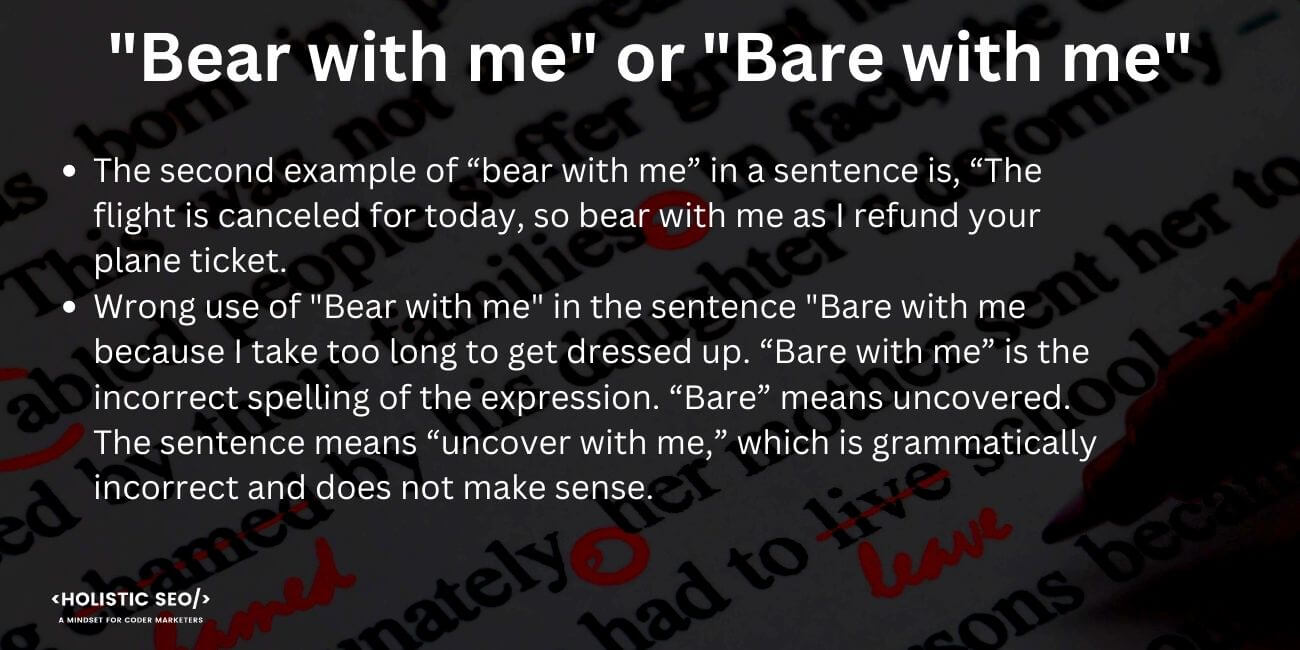 “Bear with me” is the correct spelling and form, while “Bare with me” is a common grammar error. The common misspelling and grammar error for “Bear with me” is “Bare with me.” The present tense of “Bear with me” is “Bears with me.” The present continuous tense is “Bearing with me,” and the past tense is “Bore with me.” On the other hand, “bare with me” has its own verb tenses, although it is the incorrect form of the expression. “Bares with me” is the present tense, while “baring with me” is the present continuous tense. The past tense is “bared with me.” There is no root word for both “bear with me” and “bare with me,” mainly because the words are already basic. Additionally, there are no prefixes or suffixes for either of them, as the words do not have any other variations. Using the incorrect expression “bear with me” in content writing negatively affects the content or article. It exhibits poor quality content and the unprofessionalism of the content writer. Misspelled words create confusion and an inability to convey the right message to readers. Hence, proper knowledge as a content writer and knowing the distinction between these two words when writing is critical. The quality of the content depends on how well-written the structure of each of the sentences is.

Examples of the correct and incorrect spelling of “bear with me” and “bare with me” are listed below.

Which one is Correct, Bear with me or Bare with me?

“Bear with me” is the correct form of the phrase, while “Bare with me” is the incorrect one. “Bear” and “Bare” are both grammatically correct English words. However, the “Bear” and “Bare” mean two different things. “Bear,” as a noun, refers to an animal, specifically a carnivore mammal, with four feet and a short tail. ‘Bear,” as a verb, is defined by the Oxford Dictionary as “to carry,” “support,” deal with,” or “be responsible.” On the other hand, “bare” is an adjective that means “not covered/to uncover,” “empty,” or “just enough.” “Bear” is more appropriate to use before “with me” instead of “bare.” For example, “Bear with me as I am a slow learner.” The sentence means that the listener must be patient with the speaker because of being a slow learner. “Bear” in the sentence is not a noun that refers to an animal, but rather, it is used as a verb. Now, use “Bare” instead of “Bear.” “Bare with me as I am a slow learner” is grammatically incorrect as the sentence then means “uncover” the speaker because the speaker is a slow learner. The sentence does not make any sense. “

What are the Correct Examples of “Bear with me” in Sentences?

Listed below are the correct examples of “Bear with me” in sentences.

“How to Spell Bear with me and Bare with me” Correctly in Past Tense?

“Bear with me” is spelled in the past tense as “Bore with me.” “Bore” is the past tense of “Bear.” The -ear is replaced with -ore. A content writer must be aware of certain rules in forming past verb tenses. The first rule is to take the root word of the verb and add -ed. The second rule is to add -d when the verb ends in “e.” The third rule is the “y” on verbs ending “y” that follows a consonant, the “y” must be replaced -ied. However, verbs ending in “y” that follow a vowel have a whole new different rule. The “y” is maintained, and -ed is added at the end of the word. The fourth rule is that certain words have a unique rule and do not follow any specific rules. Some words are spelled with -lt as their ending letters. Some words change the whole spelling of the word to form their past tense. One example of this is “bear.” The past tense is not “beared” instead, “bear” turns into “bore.” The past tense of the expression “bear with me” is “bore with me.’ The spelling of the root word “bear” is completely changed.

How to Pronounce “Bear with me”?

How to Pronounce “Bare with me”?

What is the meaning of Bear with me?

“Bear with me” is defined by the Oxford Dictionary as an expression that loosely translates as “be patient with me.” Often, some think that William Shakespeare, an English writer, poet, and actor, created the term. “Bear with me” in “Julius Caesar” by Shakespeare Author shows the correct use of “Bear with me.” Specifically, the line goes, “Bear with me; My heart is in the coffin there with Caesar.” “Bear with me” is used here as a reflection of contemporary speech during the Elizabethan era. “To bear” is an old verb meaning to carry, connecting it to the Greek pherein and Latin ferre. Unfortunately, Shakespeare did not invent the expression. The idiom means “asking someone to carry the burden of being patient until they reach their destination.” The expression is still used nowadays when someone wants another to be patient with them or if someone is waiting in line.

What is the Etymology of Bear with me?

How to Use Bear with me in a sentence?

What are the Synonyms of Bear with me?

Listed below are the synonyms of Bear with me.

What to Know for Using “Bear with me” and “Bare with me” in Content Writing?

How to Fix Incorrect uses of Bear with me in Content Writing and Marketing?

Professional Content writers always assure that they use the correct and relevant words in their articles. Additionally, they ensure that there are no misspellings or grammar errors. Content writers have extensive knowledge about the proper spellings to fix the incorrect uses of terms and expressions in their content and articles. Use “bear” as the first word of the expression instead of its homonym, “bare.” One tip is to remember the animal “bear” to ensure that the correct spelling is used. Additionally, content writers must proofread the content before submitting or publishing it to avoid grammatical errors, such as misuse and wrong spelling.

What are the Other Misspelled Examples similar to “Bear with me and Bare with me”?

Listed below are the other misspelled examples, similar to “Noone” and “No one.”

How does Writing “Bear with me” wrong affect SEO and Content Marketing?

Misspelled words such as “Bare with me” affect Search Engine Optimization (SEO) and Content Marketing. Grammatical errors like incorrect spelling and usage of words in writing unintentionally change what authors want to convey. it delivers a different meaning to the reader when a word is misused in a sentence. Additionally, a word with the wrong spelling conveys unprofessionalism. Incorrect grammar disturbs the flow of one’s writing as it affects the user experience of a reader and causes misinformation. It gives the impression that the author is not knowledgeable, skillful, or credible enough to write high-quality content. Quality content matters in Search Engine Optimization (SEO). Most websites that rank top contain quality written articles. Poorly written articles with misspelled and misused words are going to hurt a website. On average, 59% of consumers do not buy from an online shopping site with bad spelling and poor grammar, according to surveys conducted by some agencies. An excellent content writer must know the SEO Guide, such as the E-A-T. E-A-T refers to Expertise, Authoritativeness, and Trustworthiness. They must exhibit proper word spelling for their content to rank up in the search engine. Content writers must know their target readers to know what word is supposed to be used. The content is going to have a higher E-A-T score that influences Google or search engine ranking.