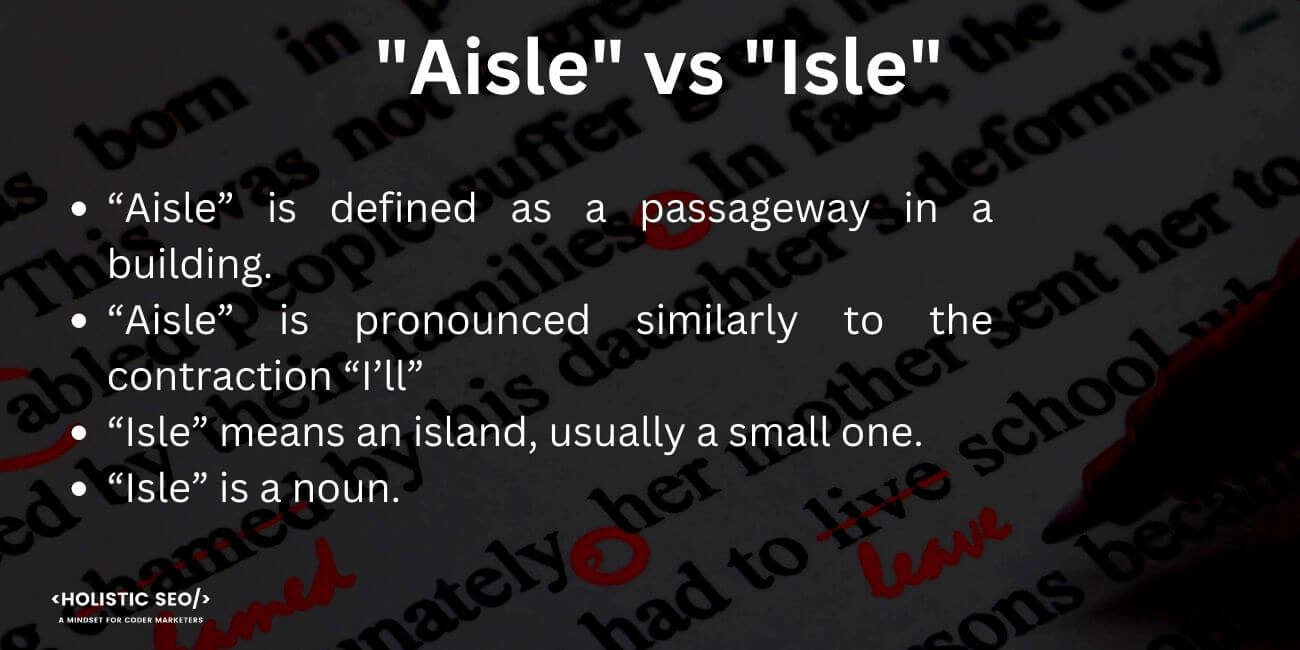 “Aisle” is defined as a passageway between rows and seats in a building, such as a church, auditorium, or theater. The word “Aisle” is oftentimes used interchangeably with the word “Isle”. “Isle”, on the other hand, means a small island. These two English words are commonly misused because they both sound alike. They appear to be similar too, with just a slight difference in their spelling. The other starts with the letter “A”, and the other with just the letter ‘I”. People oftentimes are confused about when and how to use the correct word, “Aisle vs. Isle”, which word is the correct one? The answer is both words are correct, so long as it is properly used in a sentence. “Aisle versus Isle”, these two words must not be mistaken with their usage.  However, due to their pronunciation similarity, other people are finding it quite difficult to identify which is which. “Aisle and Isle” are examples of homonyms, both words have the same pronunciation but differ in spelling and their meaning. Always remember the word “Island” when using “Isle” in a sentence. Both words start with the letter “IS”. “Aisle”, referring to a passageway, always starts with the letter “A”. These two words are frequently used by people who are not quite familiar with their true meaning.

Listed below are the differences and comparisons between the words “Aisle” and “Isle”.

It is important to identify when and which words must be used in a sentence in order to deliver the correct message or information. Here are two sample sentences to show the proper usage of the words “Aisle” and “Isle”. “The bride looks immaculate when she walks down the aisle.” “I plan to visit a mysterious isle in the Philippines.” The first sentence uses the word ‘aisle” to refer to a passageway of a church. The second sample sentence is referring to an island, hence the word “isle” was used. Both words are an essential part of speech and must be used in a sentence correctly. English has a lot of misused words, due to their similarity in sound and appearance. The word “alot” is one example of the commonly used word, however, it is grammatically incorrect. The proper term must be “a lot”, having space between the words “a” and “lot”. “A lot” means “a large number or quantity. Knowing when and how to use the words “Aisle” and “Isle” is important not just for everyday conversations but in business too. Words are powerful in marketing; people communicate through words. Using the correct words in marketing will have the power to persuade consumers to buy a certain product. It is why it is essential to use the right words and correct spelling when writing something, especially in advertisements. To be able to convey a message, the words must be chosen correctly and written properly.

What does “Isle” Mean?

“Isle” is defined by the Oxford Dictionary as a small island or peninsula. The word “Isle” originated from the Old French word ile, earlier isle, from Latin insula ‘island”, it is a word of uncertain origin. Others believed it came from the word “salo” which translates to “salty sea”. Ancients guessed it came from the ablative of salum “the open sea” pertaining to sal “salt”. The word “isle” was first used in the 13th century. “Isle” is not a typically used word in speech or non-fiction writing. However, it is used in the proper name of an island. “Isle” is basically used in literary English, such as when writing poems or other forms of creative writing. The word “Isle” is not commonly used on a daily basis, however, it is still an important word in the English language, and it must be used correctly. Words such as “Isle” are essential parts of speech. It delivers the wrong message and meaning when it is used incorrectly.

What are the Sentence Examples with “Isle”?

Listed below are the sentence examples with “Isle”.

When to Use the Word “Isle” in a sentence?

The word “Isle” is a noun that is typically used in a sentence that pertains to a small island. “Isle” is mostly associated with the ocean or sea. “Isle” is the archaic or old-fashioned term pertaining to land surrounded by the sea, while the term “Island” is the standard form. Remember the word “Island” when using the word “Isle” do not be confused with its correct spelling. Both words start with the letter “IS”.

What are the Synonyms of “Isle”?

“Isle” has several synonyms, despite not being a typical English word. The synonyms of “Isle” are islet, archipelago, peninsula, cay, enclave, reef, atoll, bar, and island. These synonyms are used as an alternative for “isle.” “Isle” is used in a sentence when referring to a small island. The word “Isle” is a noun. Here are sample sentences using the synonyms of “isle;” “Our new neighbor is so rich that he bought a big mansion in a nearby peninsula (isle).” “There was a mermaid sighting on an atoll (isle) near the Caribbean, according to myths.”

What are the Antonyms of “Aisle”?

Listed below are the antonyms of “Aisle”

How to Spell “Aisle”?

The word “Aisle” means a passageway between rows, like that of a church. It spells A-I-S-L-E. It has a silent “S” when pronounced. Furthermore, it is commonly mistaken and spelled incorrectly as “Isle”. However, the word “Isle” has a totally different meaning. “Aisle” when spelled correctly, has the letter “A” in its spelling. The word “Isle” means a small island, and its spelling doesn’t contain the letter “A” in the beginning. These two words are interchangeable in English oftentimes.

What are the prepositions and helper words for Aisle?

Comparison between “Aisle” and “Isle”

Below is a table comparison between “Aisle” and “Isle”.

Why are “Aisle” and “Isle” misused and interchangably in English?

The words “Aisle” and “Isle” are misused and interchangeably used in English because they sound alike. Both words have silent “s” when pronounced. The two words are pronounced like the contraction “I’ll”.  “Aisle” and ‘Isle” are two examples of Homophones, both differ in spelling and their meaning, but they sound alike. These two words are often mistaken for their spelling and usage. “Aisle’ and “Isle” appear similar too, they differ in just one letter, and, understandably, people get confused with them.

Are “Aisle” and “Isle” in the most commonly misused English words?

No, “Aisle” and “Isle” are not the most frequently misused English words. There are various misused words in English. “Isle” is actually an archaic word that is not commonly used every day, while “Isle” particularly refers to an island. However, these misused words affect someone’s delivery of a message. It results in misinformation and confusion when misused. The English language is a tricky one. Oftentimes, some words are used interchangeably. These words are often mistaken for spelling and usage. These repeatedly misused English words have similar pronunciations, but distinct meanings. Other people are finding it hard to identify which is the right one in a given context. Some of the most commonly misused English words, are affect and effect, complement and compliment, defence and defense, farther and further, inquiry and enquiry, a lot and allot, your and you’re, principal and principle, and so many others.

What are the other similar Misused Word Pairs like “Isle” and “Aisle” in English?

In English, several other misused word pairs like “Isle” and “Aisle” exist. Most of these misused words are Homophones. Homophones are words having the same pronunciation but are different in meaning and spelling. Most people are confused by these words and frequently commit grammatical errors. Some popular misused word pairs include accept and except, are and our, they’re and their, elicit and illicit, and many others. These given word pairs sound the same, but the spelling and their meanings are not alike.

Listed below are the Misused Word Pairs like ‘Isle” and “Aisle” in English.

How do Content Writers use “Aisle” and “Isle” in their articles?

Do Content Writers use “Aisle” and “Isle” in a wrong way?

No, content writers do not use “Aisle” and “Isle” in the wrong way. Oftentimes, these words are interchangeably used in a sentence. However, content writers are professional, skilled writers who practice grammatically correct English. Content writers possess the proper knowledge when it comes to writing. They are adept writers who know how and when to use the proper words in their sentences. One is not able to convey a proper message if one commits repeated grammatical errors. The English language is full of confusing words that sound alike but are spelled differently. Others are confused by these words because they sound the same. One way of ensuring that there are no grammatical errors in an article is by reading it several times.

Do Misused Words such as “Isle” and “Aisle” Isle affects SEO and UX?

Yes, misused words such as “isle” and “Aisle” affect SEO and UX.  Grammatical errors in writing unintentionally alter what authors want to convey. It is a wrong spelling or misuse of words. It delivers a totally different meaning to the reader when a word is misused in a sentence. The same thing happens with misspelled words; a word with the wrong spelling gives the impression of unprofessionalism and incompetence. Quality content matters in SEO. Most websites that rank number 1 contain good-quality written articles or content. Poorly written articles actually hurt a website’s ranking. Misspelled and misused words are common grammatical errors made by authors. According to polls conducted by some agencies, on average, 59% of consumers do not buy from an online shopping site that has bad spelling and poor grammar. Poor grammar disturbs the flow of one’s writing. It affects the user experience of a reader and causes misinformation and misunderstanding.