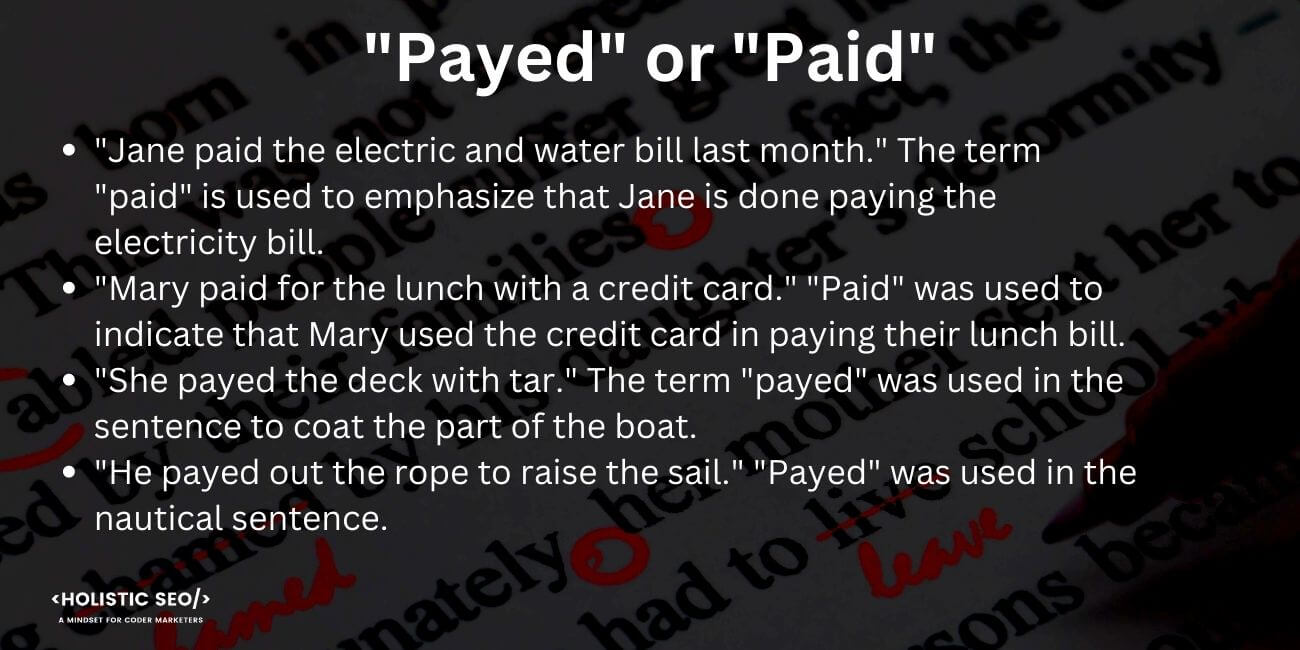 The words “paid” and “payed” are both correctly spelled terms that have their own meanings. The word “paid” is the correct form of the verb “pay” when used in the past tense. It is commonly seen in finances and businesses. On the other hand, “payed” is the correct term to use when the verb “pay” is utilized in a nautical context. The word “pay” comes from Latin and was brought into the English language by the Anglo-Norman word “paier.” The word “pay” has been in use since the Roman era. The term “pacify” comes from the Latin verb “pacare,” which comes from the same root. However, in modern usage, “pay” means more than one thing; if a person pays for goods and services, they are essentially exchanging monetary compensation for the acquired items. Meanwhile, the word “pay” is utilized in a different sense in some instances. The word “pay” demonstrates that they are providing their interest in something when someone pays attention. The meanings of the verb “pay” are associated with nautical terms and are particularly prominent. “Pay” refer to a number of different concepts. It refers to the practice of painting joints with a mixture of tar and resin in order to make them watertight. It sometimes means turning the ship so that it faces away from the wind or leeward (pay off) (pay away). The word “pay” refers to the act of loosening a rope or chain to release the tension and go (paying out) in some situations.

Listed below are the example sentences of the words “paid” and “payed.”

What is the Difference between Payed and Paid?

The difference between “payed” and “paid” is the meaning they bring and the context they apply. These two words seem to fall in the same category, but they refer to unrelated things. “Payed” is sometimes misinterpreted as an incorrect version of the word “paid.” However, it does have its own specific definition. The primary definition of “payed” according to reliable dictionaries is “to give slack to a rope” in the simple past tense form of “payed out.” Another definition has nautical origins. The word “payed” is referring to the meaning, “to be covered with tar” in the simple past and past participle tenses. These two nautical meanings are rarely used even writers or speakers have likely never seen or use them in one of their sentences. Whereas the term “paid” is the correct and only simple past tense and past participle form of the verb “pay.” It bears the meaning “to exchange money for a product or a service.”

No, the words “payed” and “paid” do not share the same meaning. The difference between “payed” and “paid” comes from both the spelling and meaning. The term “payed” is more on maritime-related things. It is a word used in connection with sailing and transport or to coat something with a tar. On the other hand, “paid” is used as a primary term for transactions that involve money and trade. It is used more for financial means or pertaining to return for services rendered; paying outstanding debt.

How to Spell Payed and Paid?

The word “payed” is spelled as “P-A-Y-E-D.” Its main distinguishing factor is that it is spelled with the letters “y” and “e.” Meanwhile, the word “paid” is spelled as “P-A-I-D.” It is a four-letter word that is constructed with the letter “i.” However, these variations in spellings do not change the manner in which they are pronounced. The correct pronunciation of both “payed” and “paid” is “payd.” It is highly essential to familiarize the common sound and spelling of English when starting to speak and learn the language. Checking out the phonetics and recording the correct pronunciation to listen to it are two of the most effective ways to pronounce the words correctly. These methods are extremely helpful to spot mistakes in terms of pronunciation. YouTube’s tutorials are another methods to learn the pronunciation of “payed” and “paid” in a faster and clearer way. Focusing on one accent alone enables beginners to have intuitive skills in pronouncing “payed” and “paid.”

How to Use “Payed” in American English?

The word “payed” must be used to refer to nautical or maritime sentences in American English. It is a past tense and past participle of the verb “pay.” The “payed” word is used in sentences that have to do with ropes and ship hulls. The sentence that contains the meaning of letting out a rope or chain by slackening it is another setting that the word “payed” is used. “Payed” is only applicable in these contexts and is not allowed to be included in finance-related areas as it causes grammar errors and misspellings.

Listed below are some example sentences using the word “payed” in American English.

How to Use “Paid” in British English?

The term “paid” is used in financial matters in British English. It must be used in sentences that demand the meaning, “act by which one receives something, particularly money.” The word “paid” has something to do with giving or transferring money and visiting or recalling. It is the correct past and past participle tenses of “pay.” “Paid” is a very common word in the business industry, especially when talking about purchasing products or services and returning a debt.

Listed below are the example sentences of the word “paid” in British English.

What are the Common Phrase Combinations of “Payed” and “Paid”?

Listed below are the common phrase combinations of “payed” and “paid.”

What are the Example Uses of “Payed” in American Publications?

Listed below are examples of “payed” in American publications.

What are the Example Uses of “Paid” in British Publications?

Listed below are examples of “paid” in American publications.

When to use the word “Payed” and “Paid”?

The words “payed” and “paid” must be used when a sentence is describing either nautical or financial topics. The writers must need to consider first the meaning and purpose of these words in a sentence before using them. The word “payed” must be used solely by authors in terms of nautical contexts and maritime concepts. Whereas the word “paid” must and only be used as a past tense and past participle form of the word “pay” when talking about financial aspects. Authors must think about business or ships in deciding whether to use “paid” or “payed” in their sentences. Interchanging these words results in incomprehensible writing which affects the ability of the sentences to convey meaning.

How to Use “Payed” or “Paid” for Content Marketing?

Content marketers use “payed” and “paid” to discuss their maritime or business topics. Content marketing covers a wide range of ideas, which means content writers are tasked to use words that perfectly suit the information they want to send to the audience. A content marketer uses “payed” when trying to express the meaning in nautical terms, while the word “paid” is for financial transactions. It is very easy to recognize which one to choose because “payed” which deals with ships and navigation is spelled with the suffix “ed.” On the other hand, the word “paid” that has to do with money and trading goods has the suffix “id” which replaced the letter “y” from its root word. Interchanging these two words results in grammar errors and misinterpretations by the audiences who try to read or view the content marketing.

Accents are important in many languages, not just English, and they have a big effect on how well search marketing works. Search results for each distinct accent, suggest (but do not guarantee) that the system distinguishes between the various pronunciations. However, despite the fact that there are some overlaps, each ranking is unique, with the top spots shifting less frequently than the lower items on the first page. The latter is true even when there are some similarities across the rankings. As a direct consequence of it, the algorithm employs a wide array of strategies when dealing with the various methods of spelling. It merely shows that the chances are there and have an impact on multi-regional SEO for savvy marketers. Accents are marks that are placed both above and below existing characters in a textual element in the applicable language. They are sometimes placed between existing characters. Accentuation is a common topic of conversation among mutli-regional SEO guide specialists when discussing the significance of search engine algorithms. Additionally, having a good accent while producing content for search engine optimization is quite vital (SEO). The use of diverse accents for different target audiences is, thus, useful for international search engine optimization (SEO) rankings of the website or the content.

What are the Similar Accent Differences such as “Payed and Paid”?

Listed below are similar accent differences, such as “payed” and “paid.”