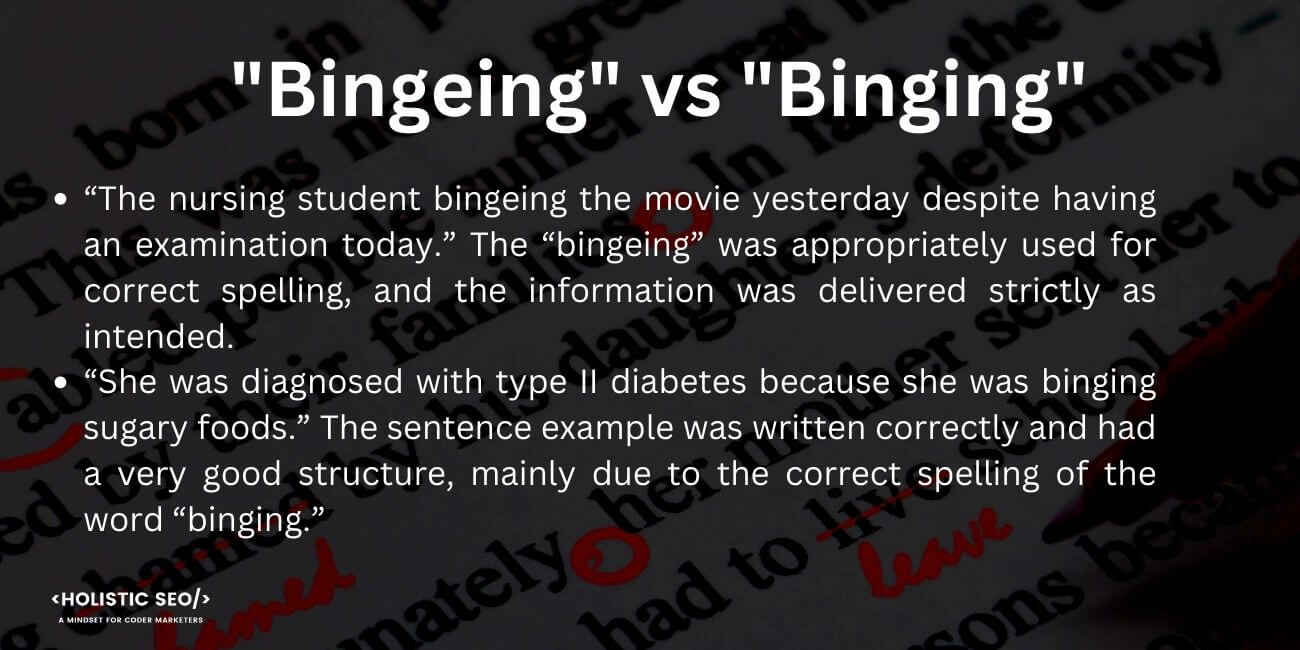 Listed below are the example sentences of the correct usage of “bingeing” and “binging.”

Which one is Correct, Bingeing or Binging?

“Bingeing” and “binging” are both grammatically acceptable in terms of spelling according to any dictionaries. These words are used interchangeably because they share the same meaning. However, the word “bingeing” is more popular nowadays compared to “binging.” The root word for “bingeing” and “binging” is “binge,” which means an excessive or exaggerated act or engagement in a particular activity. “Binging” is only spelled with seven letters and contains two vowels. On the other hand, “bingeing” has eight letters including three vowels, with the addition of the letter “e.” An example of “bingeing” or “binging” in a sentence is, “The worms are bingeing/binging over the rotten apple placed on the table.” The two words were used in the sentence since they are both correct and allowed to be used interchangeably. The meaning of the sentence does not change whether the word “bingeing” or “binging” is used. It is only a matter of preference.

How to Pronounce “Bingeing”?

The pronunciation of the word “bingeing” is bin-juhng. “Bingeing” is a word with two varying syllables and is spoken verbally with two distinct sounds. The “binge” part which is the root word is pronounced as “binj.” The “ing” part of the word which is the suffix is pronounced as “ing”. The two sounds when combined, become bin-juhng. The pronunciation of “bingeing” is quite difficult for beginners compared to “binging” as its additional letter “e” gives a confusing impression.

What are the Correct Examples of “Bingeing” in Sentences?

The correct examples of “bingeing” in sentences are listed below.

“How to Spell Bingeing and Binging” Correctly in Past Tense?

The verb tenses that are utilized in sentences influence both the structure and context of the article. The verb tenses indicate whether the statement is being discussed in the past, present, or future. Hence, the appropriate verb tenses make the sentences more understandable and meaningful to the readers. For example, the sentence, “She was my idol, I binged her music before when she was still not problematic,” indicates that the sentence happened in the past and is not existing in the present time anymore. However, if the words “bingeing” and “binging” were used, the sentence sounds like it exists in the present. Therefore, verb tenses must always be observed and used appropriately to avoid misinterpretation of information.

How to Pronounce “Binging”?

What is the meaning of Bingeing?

The meaning of “bingeing” is “engaging in an activity uncontrollably, especially eating, drinking, or taking drugs” or “watching several episodes of a television or online show within a short amount of time.” The word “bingeing” is utilized in sentences that discuss activities that are being done beyond normal. The etymology of “bingeing” is “soak” from a Lincolnshire dialect that was used in the 19th century. It means individuals who are drinking excessively are letting their brains be soaked in alcohol.

What is the Etymology of Binging?

The etymology of the word “binging” is “soak” from the Leicestershire and Northamptonshire dialect. It is a term that became popularized in the 19th century due to the concept of individuals who engage in overconsumption of alcohol and let their brains be soaked. “Bingeing” is used to describe excessive engagement in a series of activities such as eating, drinking, and watching television shows in the present era.

How to Use Bingeing in Sentences?

The usage of “bingeing” in a particular sentence requires the topic to be about excessive activities in a short period of time. The term “bingeing” was made to be a primary description of certain acts that go beyond what is moderate or normal. “Bingeing” is associated with the words overeating, overdose, and overdrinking, among others. Therefore, it is very appropriate to use “bingeing” in sentences with topics about indulging in excessive activities as it helps in emphasizing and presenting the information more clearly. An example of “bingeing” in a sentence is, “She was binging the food in the eat-all-you-can restaurant out of hunger due to seven days of fasting. The synonyms of “bingeing” are “debauch” and “booze-up.”

What are the Synonyms of Bingeing?

“Binging” is not commonly used in the English language to describe a particular topic associated with being excessive. Therefore, only a few synonyms are linked to the word “binging.”

The synonyms of the term “binging” are listed below.

“Should I use a synonym if I do not remember the correct form?” Yes, a synonym must be used when the correct word is forgotten. The usage of synonyms is highly recommended in circumstances where the correct spelling is not clearly remembered. Synonyms have exact or almost similar meanings to the original word; hence, using them does not literally change the whole context of the sentence. Forcing to use a word that is not remembered results in misspellings and incorrect usage, which causes confusion and misinterpretation to the readers.

What to Know for Using “Bingeing” and “Binging” for Using in Content Writing?

How to Fix Incorrect uses of Bingeing in Content Writing and Marketing?

What are the Other Misspelled Examples similar to “Bingeing and Binging”?

The other misspelled examples similar to “Bingeing” and Binging” are listed below.

How does Writing “Bingeing” wrong affect SEO and Content Marketing?

The wrong writing of “bingeing” affect SEO and content marketing negatively. The wrong spelling and form of the word “bingeing” in a particular sentence of content marketing make its quality inferior compared to the other competitors. Poorly-written content has a low ranking on the search engine because the ranks are based on the quality of the content. The quality of the content is dependent on the words and the information contained in content marketing. Search Engine Optimization (SEO) allows content marketing to thrive in the search engine, but it is being hindered by the incorrect writing of “bingeing.” On the other hand, the User Experience becomes less interesting and satisfying as readers are confused and unable to get the information they need. Therefore, to avoid negatively affecting SEO and UX, the content marketer must be able to correctly write the word “bingeing.”