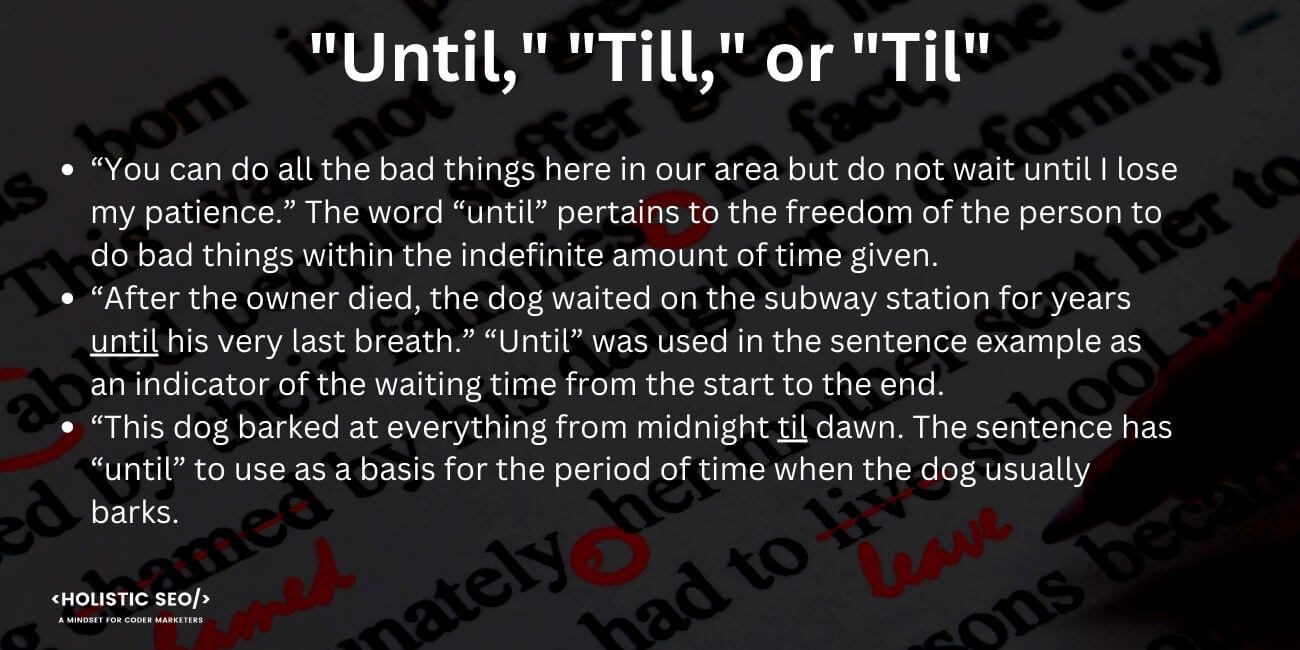 Listed below are the example sentences of the correct spelling of “Until,” “Till,” and “Til.”

Which one is Correct, Until, Till and Til?

The words “until,” “till,” and “til” are correct when it comes to spelling. “Until,” “till,” and “til” are just different versions and forms of each other. They differ in the way they are constructed, but they are not grammatical errors and possess the same meaning. The meaning of “until,” “till,” and “til” is, “up to the point in time or the event mentioned.” The terms “until,” “till,” and “til” have no additional suffixes and prefixes, mainly because they are simply the root words. An example of “until” in a sentence is, “I will not buy a new smartphone until my old phone dies.” The word “Until” was used in the sentence to indicate that the person is not purchasing another phone because the old phone is still functioning. One example of “till” in a sentence is, “The popular cancer patient of their hospital fight for his life till the last energy left in his body.” “Till” was utilized in the sentence to express the indefinite duration of the fight of the patient with the illness. A correct sentence usage of “til” is, “I don’t care how much time it will take me, but I will wait for my dog to go home until the end of the year.” The “Til” in the example was placed to describe the span of time the owner is willing to spend waiting for the dog.

How to spell “until” correctly in the present continuous tense? There is no correct spelling of “until” in the present continuous tense because it is a preposition and conjunction that does not have any tenses. The word “until” exists in its current form regardless of the tense that has been set in a particular sentence. The only available tense of the word “Until” is the simple present tense. Any alterations of the spelling of “until,” such as adding the suffix “ed” or the gerund “ing” is automatically considered incorrect.

What are the Correct Examples of “Until” in Sentences?

Listed below are the correct examples of “Until” in the sentences.

“How to Spell Until and Till” Correctly in Past Tense?

There are no correct spellings of “until” and “till” in the past tense. The words “until” and “till” both fall under the category of prepositions and conjunctions; these types of terms only remain the same despite the different tenses present in a particular sentence. These words are similar to prepositions “in,” “to,” and “for,” among others, that stay constant in every sentence they are used. “Until” is only spelled as “U-N-T-I-L,” which is under the simple present tense form. “Till” is spelled solely as “T-I-L-L,” and not even a single letter is changed. Any alterations of the words “until” and “till” in trying to construct them into past tense result in misspellings and grammatical errors.

How to Pronounce “Until”?

The pronunciation of “until” is “uhn-tel.” “Until” is a word with two syllables pronounced with two distinct sounds. The first syllable comes from the “un” part of the word with the sound “uhn.” The second syllable is based on the “til” portion of the term and is read verbally as “tel.” “Until” is a simple word but causes common mispronunciation among new English readers as the vowel “u” is pronounced oppositely compared to its original sound.

How to Pronounce “Till”?

The pronunciation of the word “till” is “til.” “Til” is sometimes mispronounced as “tel” because beginners and non-native English speakers have difficulties recognizing the differences between the sound of “e” and “i.” “Till” is a word that is very simple to read verbally as it has only one syllable. On top of that, it is spelled the way how each basic sound of the English letter is pronounced.

What is the meaning of Until?

The term “until” means “up to the time that; up to such time as.” “Until” is used in a particular sentence as a primary indicator of a certain duration of unspecified time. It is usually seen in sentences about waiting for something or someone. The etymology and origin of the word “until” is “till,” which came from Old English and has existed even before the year 800. The first documented usage of “until” was way back in the 12th century.

What is the Etymology of Until?

The etymology of the term “until” is “till.” It is the old English variant of “until” that has been used in the English language since the 9th century. Unlike other etymologies, “till” has the exact same meaning as “until.” ”Till” came from a Scandinavian source. The word “till” is a very old word and its documented first usage was in the year 1200.

How to Use Until in a sentence?

The sentence must discuss an unspecified span of time to use “until.” “Until” is a common English term that functions in two ways. It is a preposition and conjunction that means “up to the point in time or the event mentioned.” An example of “until” in a correct sentence is “The patient was healthy and conscious until the doctor prescribed an incompatible drug.” One of the synonyms of “until” is “before.” Before is used in sentences to give the meaning, “event happened in the past.”

What are the Synonyms of Until?

The synonyms of “until” are groups of words or phrases that contain closely similar meanings and are allowed to be used interchangeably in some contexts. These synonyms are used in some considerable cases, such as avoiding redundancy in sentences and paragraphs.

The synonyms of “until” are listed below.

What to Know for Using “Until,” “Till” and “Til” for Using in Content Writing?

Listed below are the things to know about using “until,” “till,” and “til” in content writing.

How to Fix Incorrect uses of Until in Content Writing and Marketing?

What are the Other Misspelled Examples similar to “Until, Till and Til”?

The other misspelled examples similar to “until,” “till,” and “til” are listed below.

The common features and types of errors found in these groups of words are spelling, meanings, and pronunciation. These words are closely similar to each other. Some of them pertain to the same meaning or subject, while others are not related at all. It is very important to take note of their similarities and differences to prevent misspellings and commit grammatical mistakes which are very critical in content writing. Comparing these words with each other is an effective way of spotting which one is appropriate. Beginners and non-native English speakers must always be cautious as they are the ones who are prone to misusing and interchanging words.

How does Writing “Until” wrong affect SEO and Content Marketing?

Writing “until” wrong affects SEO and content marketing’s capacity to gain better traffic. Search Engine Optimization (SEO) is the method of making specific content better in terms of quality and readability. A way to achieve it is to use words appropriately and make the sentences grammatically correct. However, when there are issues regarding the misuse of “until” in content marketing, its SEO is negatively impacted which results in a lower ranking on the search engine. A low rank means lesser engagement, as readers have fewer chances of visiting the content located at the bottom part of the search engine. Apart from that, users do not use content that contains grammar errors, mainly because it is not informative and confusing. Hence, an SEO guide is very important so that content marketers are aware of the dos and don’ts in content marketing.