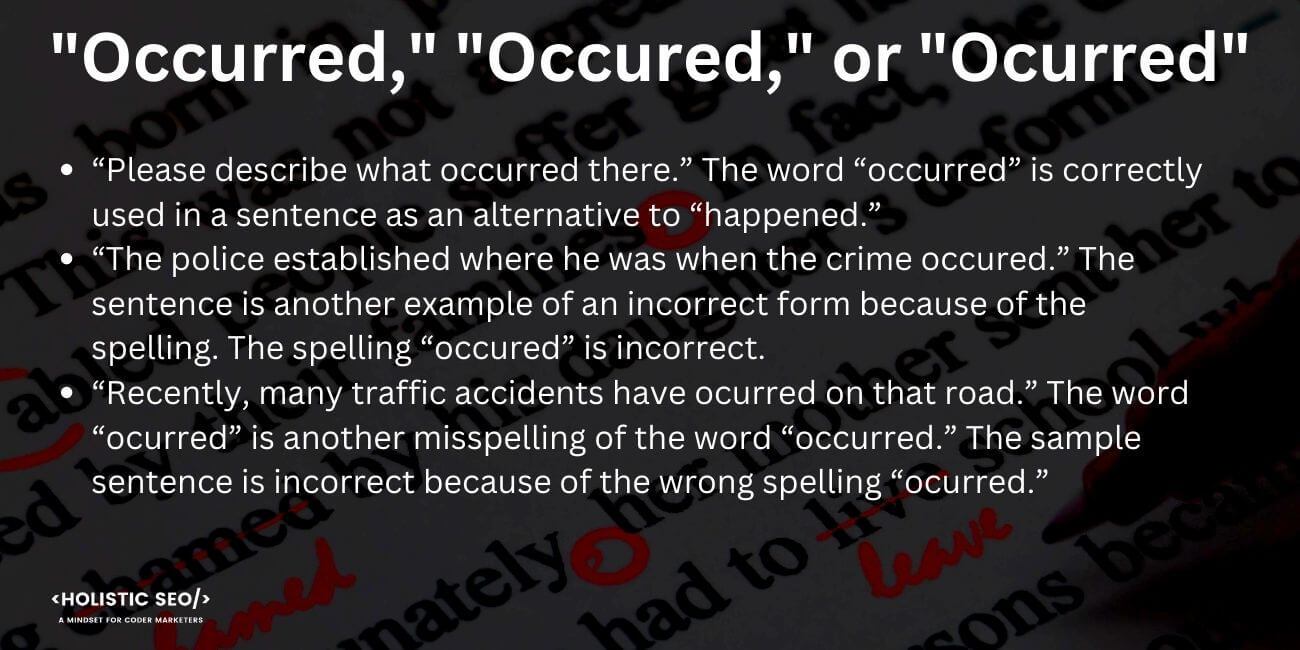 The words “occurred.” “occured,” and “ocurred” are words that look and sound alike. It is often misused, which results in wrong spelling and grammar issues. Identifying when and which words are used in a sentence is vital to deliver the correct message information. Properly using words like “occurred.” “occured,” and “ocurred” in a sentence matter because it is a must to convey factual and accurate information. “Occurred” is the correct spelling and form, while  “occured,” and “ocurred” is the wrong spellings. The root word of the word “occurred” is “kers” which means “to run.” Furthermore, spelling affects almost every aspect of our daily communication, from how we understand something to how we communicate our thoughts and opinions. Understanding the importance of spelling in our children’s future is crucial because so many things depend on clear communication. Writers must choose their words and write them properly to convey a message. The same thing applies in content writing, to write good quality content, writers must be knowledgeable with the proper terms and words. Content writers communicate with their readers by writing correct and informative articles.

Listed below are two examples of the correct usage of the word “Occurred” in a sentence.

Which one is Correct, “Occurred,” “Occured,” or “Ocurred”?

What are the Correct Examples of “Occurred” in Sentences?

Listed below are the five examples of “Occurred” in sentences.

The incorrect spelling of the term “occurred” is “occured” and “ocurred.” Recognizing that the word “occurred” must have two “C” and two “R” is the way to distinguish the correct form from the incorrect one properly. The wrong form is the spelling “occured” which only has a single “R.” The other incorrect spelling is “ocurred” which only has a single “C.” Content writers must observe the spelling differences properly to avoid grammatical errors in a sentence. A piece of comprehensive knowledge of certain words is essential to have to prevent future mistakes. Familiarity with the terms helps to maintain error-free content. Furthermore, it is better that writers pay attention to the fact that “occurred” is only the correct way to spell the word.

“How to Spell Occurred and Occured” Correctly in Past Tense?

How to Pronounce “Occurred”?

How to Pronounce “Occured”?

What is the meaning of Occurred?

Listed below are examples with grammar, and meaning points of view using the word ”occurred” from important books, novels, and poems.

What is the Etymology of Occurred?

The word “occurred” comes from the French “occurrer” which means “happen unexpectedly.” Additionally, it comes directly from the Latin “occurrere.” which means “run to meet.” The word “occur” was first used during the 1520s. Nowadays, the most common accent used in “occurred” is the American English language. It is used by American and British people, including other English-language countries.

How to Use Occurred in sentence?

What are the Synonyms of Occurred?

Listed below are the synonyms of Occurred.

Synonyms are words or phrases that mean exactly or nearly the same as another word or phrase. To answer the question, “Should I use a synonym of “Occurred” if I do not remember the correct form?” The answer is yes, use the synonyms if it is accurate or grammatically correct. Furthermore, synonyms have exactly the same meaning as other words. However, it is still better to still use the word “occurred” when writing a sentence.

What to Know for Using “Occurred”, “Occured”, and “Ocurred” for Using in Content Writing?

How to Fix Incorrect uses of Occurred in Content Writing and Marketing?

The spelling and the context of the word must be considered to fix the incorrect uses of the word “occurred” in content writing and marketing. Content writing and marketing must use correct spellings and forms by thoroughly checking and proofreading. It is a must to distinguish the correct spelling of the word “occurred” before writing to avoid errors and incorrect use. There are factors and considerations to follow to prevent the incorrect uses of “occurred” in Content Writing and Marketing. Firstly, to spell check and have it proofread. Running an online spell check does not effective in getting up every mistake most of the time. It is better to take time to spell-check and proofread the work manually. Thirdly, to ask for help in reviewing the work. Ask a colleague to take a look at the content before publishing it. Sometimes, other people are able to notice errors more than the writer themselves. Apply any feedback and make changes to improve upon what is already been written. Fourthly, is to read the content from the start. It helps the writer read each sentence out of context and makes it easier for the writer to detect any errors. Lastly, use online tools to support writing.

What are the Other Mispelled Examples similar to “Occurred”, “Occured”, and “Ocurred”?

Listed below are the misspelled words similar to  “Occurred,” “Occured,” and “Ocurred.”

The list above is a few examples of homophones. Homophones are crucial to understanding. The word that is homophones sounds the same when spoken but has different meanings. Additionally, there are instances where words sound identical to their identical part. However, the words lack any linguistic significance or value. The spelling of words is variable. Differentiating the words correctly are sometimes difficult or which words to use. American and British English have contrasting ways of how words are spelled. Words that sound the same to another are frequently misheard and miswritten. Generally, spelling errors occur because people lack understanding when writing rules.

How does Writing “Occurred” wrong affect SEO and Content Marketing?

The wrong writing of “occurred” affect SEO and content marketing negatively. The wrong spelling and form of the word “occurred” In a particular sentence of content marketing make its quality inferior compared to the other competitors. Poorly-written content has a low ranking on the search engine because the ranks are based on the quality of the content. The content quality depends on the words and the information contained in content marketing. Search Engine Optimization (SEO) allows content marketing to thrive in the search engine. However, it is being hindered by the incorrect writing of “occurred.” On the other hand, the User Experience becomes less interesting and satisfying as readers are confused and unable to get the needed information. Therefore, to avoid negatively affecting SEO and UX, the content marketer must be able to write the word “occurred” correctly. An excellent content writer must be aware of the E-A-T in SEO. E-A-T refers to Expertise, Authoritativeness, and Trustworthiness. Content writers must exhibit proper usage of words, such as “occurred,” “occured,” and “ocurred” to have the content writer’s articles rank up in the search engine. Therefore, content writers must know the target readers to know what word is supposed to be used. The content is able to have a higher E-A-T score. Thus, influencing Google or search engine ranking. Furthermore, Google ranks the page better based on the algorithm, assuming that the content is providing value.  There is an SEO guide that a writer needs to consider to have a better ranking on Google pages. On the other hand, giving quality experience for the users, building trust, and forming a good relationship with customers help the site from ranking better. Next is to link the content whether websites with relevant content. Additionally, the website must be secure and accessible. Moreover, the website must be mobile-friendly.