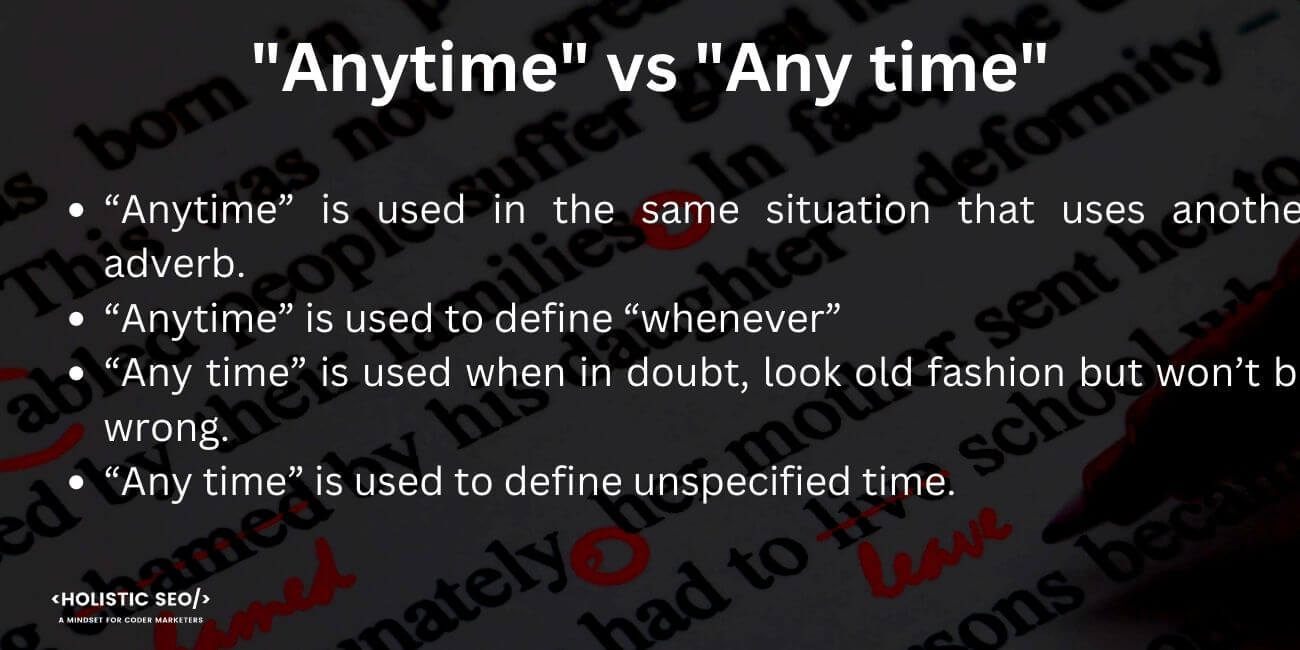 The difference between “anytime” and “any time” is their spelling and meaning. The word “anytime” is an adverb that is spelled as one word only. It is associated with the meaning “at whatever time” and is synonymous with “whenever.” “Anytime” is a shortened version of the phrase “at any given time.” It is used to refer to something that is always available when needed. On the other hand, the term “any time” is spelled as two words. It is a noun phrase that refers to an unidentified time or no exact time. “Any time” is used to refer to an event that is happening in the future but is not specified at what time it is expected to occur.

The differences and comparisons for “anytime” and “any time” are listed below.

The subject or the topic of the sentence must be considered in deciding whether to use “anytime” or “any time.” These words are used differently and are applicable in different contexts. “Anytime” is used if a particular sentence is discussing that something or someone is accessible whenever required and wanted. On the other hand, the word “Any time” is appropriate and utilized in sentences where the subject is going to arrive or occur at a time that is neither specified nor identified.

Some examples of the word “Anytime” in sentences include, “You can visit your father’s grave anytime you want; just bring some flowers,” “That person is just so abusive, and he can bully you anytime he wants, so beware of him.” These sentences utilized “Anytime” correctly due to their topics that discuss the probability of an event happening at any given time it is wanted. Meanwhile, examples of “Any time” in the sentences include, “This COVID-19 virus is an invisible villain and can enter your system any time, so stay safe and wear your mask.” “This is such a frustrating situation since the zombies are going to arrive any time, yet we do not have anything to defend ourselves from them.” The example sentences have the correct usage of the term “Any time” mainly because they are stating an expected happening that is not identified when to arrive or occur.

What does “Anytime” Mean?

The word “anytime” pertains to the meaning “regardless of what time it is.” “Anytime” is used in sentences when a particular object is available to be used at whatever time is needed. It is a contraction, which originates from the phrase “at any given time.” Oxford Dictionary defines “anytime” as “at whatever time.” The first documented usage of “anytime” was in 1822. “Anytime” is a very common word that is often used in sentences that have the context of time. It is a highly significant word since it expresses the meaning of a sentence without having to be very descriptive using a lot of words.

When does the word “Anytime” first used in a sentence?

The word “anytime” was first used in 1822. Originally, it was the phrase “at any given time,” but it was shortened to “anytime” to provide more convenience. “Anytime” has become more popular and is more commonly used than the phrase “at any given time” since then. It expanded across the globe and has been the preferred word by most English users. However, “anytime” is only used for casual conversations and discussions and is discouraged from being used in a formal setting.

What are the sentence examples with “Anytime”?

Listed below are the example sentences using the word “anytime.

When to use the word “Anytime” in a sentence?

The word “anytime” is used if the sentence is discussing the availability of a particular person or object. “Anytime” is considered an adverb that refers to the meaning “whenever possible” or “at any given time”, someone or something is available. For instance, in the sentence, “I know what you’ve been through these past few weeks, just know that you can call me, I’m here anytime you need me.” The sentence is indicating that someone’s phone is always open for the person (subject) whenever needed. “Anytime” must not be used in sentences that do not concern the availability of time, because it does not make any sense, which makes the sentence incomprehensible for the readers. Additionally, “anytime” is discouraged to be used in formal writing since it is an informal contraction, and must stay in a casual setting only.

What is the difference between “Anytime” and “Any time”?

The difference between “anytime” and “any time” is seen when it comes to their spelling, meaning, and purpose. “Anytime” does not have a space between, it is only spelled as a single word. The meaning of “anytime” is “at any given time” and is used in sentences that talk about the availability of a particular thing. On the other hand, “any time” is considered two words because it is separated by a space in between “any” and “time”. It means the time is “unidentified” or “unspecified”. “Any time” is used in sentences that discuss a subject that is about to happen, but no exact time is given.

What does “Any time” Mean?

The term “any time” is associated with the meaning “for any amount of time” or “any time whatsoever.” “Any time” is a noun phrase that functions as an adverb to modify the verb or action of a particular sentence. The etymology of the word “any time” is the phrase “from any + time” which means that something or someone is about to be witnessed at any given time. The word “any time” was first used in the early 19th century up until the present era. “Any time” is a very common word in the English language because it is frequently utilized by writers in their sentences that deal with something that is going to happen at no exact time. The “any time” in English is highly significant due to its ability to describe the unspecified time without having to be lengthy with words. It is a very useful word in casual conversations and forums.

When does the word “Any time” first used in a sentence?

The word “any time” was first used and documented back in 1822. It was used as a standard way to describe the same meaning as it is today, which is “expressing an event that happens at an uncertain time.” “Any time” is widely utilized and is highly popular among both casual and formal sets up ever since its first documentation. There are no contractions that exist replacing the word “Any time” that’s why it is still being used today.

What are the sentence examples with “Any time”?

Listed below are examples of sentences using “anytime”

When to use the word “Any time” in a sentence?

The term “any time” is a two-word used in sentences to emphasize the uncertainty of time. It is a noun phrase followed by a preposition that means “something is arriving or happening within no exact or specific time.” “Any time” is allowed to be used in a formal setting. For instance, in the sentence, “The big one is said to strike the country any time, so we must be prepared always.” The example means that an earthquake caused by the big one is expected to happen within a time frame, but without any specified time given. “Any time” must not be used in sentences that necessitate an identified time because it is contradictory and results in being irrelevant and confusing.

What are the synonyms of “Any time”?

Comparison between “A lot” and “Allot”

Below is the table that shows the comparison between the words “a lot” and “allot.”

Why are “Anytime” and “Any time” misused and interchangeably in English?

Are “Anytime” and “Any time” the most commonly misused English words?

What are the other similar Misused Word Pairs like “Any time” and “Anytime” in English?

Listed below are the other similar word pair like the word “anytime” and “any time.”

What are the things should a content writer consider in using the word “Anytime” and “Any time”?

The things a content writer should consider in using the word “anytime” and “any time is the spelling and meaning. “Anytime” is one word and has a completely different meaning even though it pertains to the same subject. The word “anytime” is only applicable in sentences that are all about the availability of a particular thing, probably a service, or a person. On the other hand, “any time” is two words, it is considered a phrase. “Any time” only functions properly in contexts of an unidentified or unspecific time. The content writers must assess first whether their sentence properly suits the criteria of these words and phrases before using “anytime” or “any time” to avoid incorrect usage.

Can content writers use “Anytime” and “Any time” in one sentence?

No, the terms “anytime” and “any time” must not be used by content writers in one sentence. “Anytime” and “any time” have different meanings, and using them in one sentence causes grammatical errors. Apart from that, the usage of these two words in a single sentence results in confusion and unclear delivery of information to the readers. Putting two different words that vary in meaning in one sentence makes it irrelevant. Hence, it is recommended to use them in a separate sentence instead to avoid committing incorrect grammar and relay the message of each sentence to the readers properly.

How do Content Writers use “Anytime” and “Any time” in their articles?

Do Content Writers use “Anytime” and “Any time” in the wrong way?

Do Misused Words such as “Any time” and “Anytime” affect SEO and UX?

Yes, misused words such as “any time” and “anytime” affect SEO and UX.” Misusing the words “any time” and “anytime” in content writing drastically affects the quality of the content. Low-quality content does not achieve a high ranking on the SEO, which makes the engagement inferior compared to the competitors. Apart from that, the incorrect usage of “any time” and “anytime” influences the user experience (UX). The readers do not understand the sentences if the words are not used appropriately, and they are most likely unable to get any useful information from the content. Therefore, it is highly important to be aware of the words in the sentences, to avoid affecting the SEO and UX negatively.