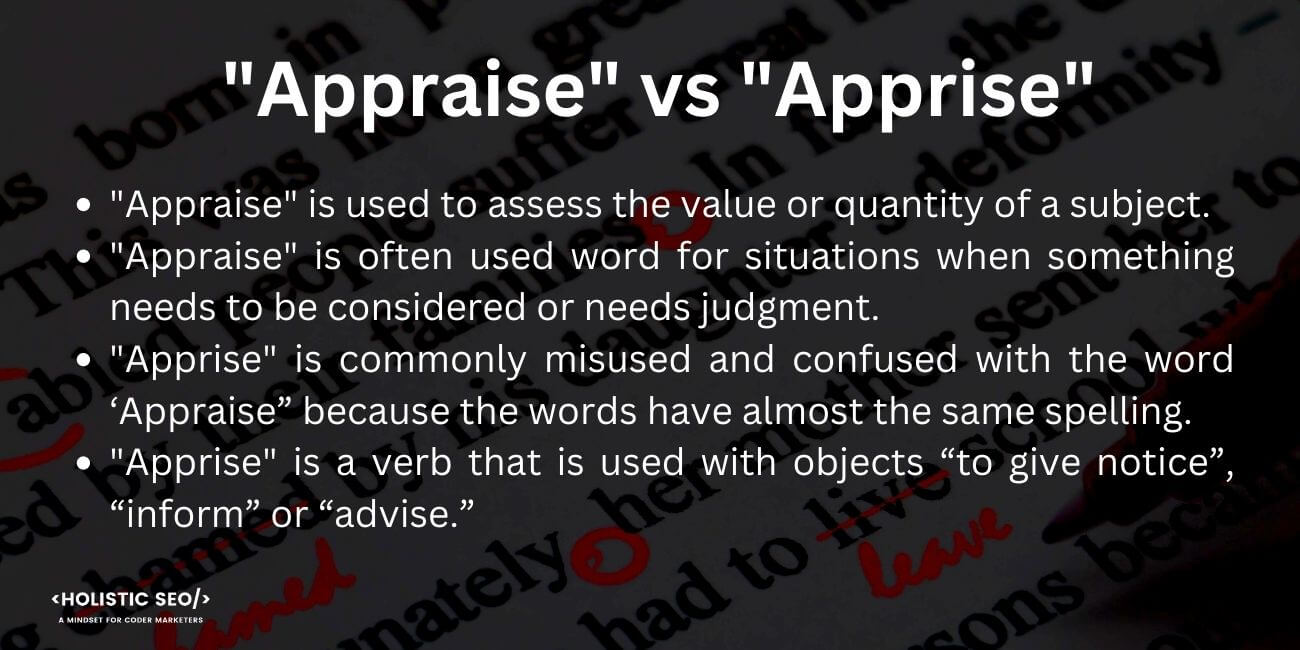 The differences and comparisons between “appraise” and “apprise” are listed below.

Generally, it is essential to identify when and which words must be used in a sentence to deliver the correct message or information. Understanding the meaning allows the writer to identify in which context “appraise” and “apprise” are used to convey a clear message. Words that look and sound alike are often misused. Furthermore, it results in mistakes in spelling and in grammar. It is a must that writers do proofread to check if there are any spelling mistakes or grammar errors in their articles.

What does “Appraise” Mean?

What are the Sentence Examples with “Appraise”?

Listed below are the sentence examples with “Appraise”

When to Use the word “Appraise” in a Sentence?

What are the Synonyms of “Appraise”?

“Appraise” is a word that has several synonyms. Some of these synonyms include, evaluate, assess, judge, measure, examine, and others. These words mean to calculate or measure something. The word “appraise” is commonly used in the English language. However, these synonyms are used as an alternative in constructing sentences. For example, “Anna stepped back to assess (appraise) her workmanship”. Another example is, “John said the board would continue to evaluate (appraise) its successes and failures”. The two words from the sample sentences are used as an alternative for the word “appraise”.

What are the Antonyms of “Appraise”?

Listed below are the antonyms of “Appraise”.

How to spell “Appraise”?

What are the prepositions and helper words for Appraise?

What does “Apprise” Mean?

What are the Sentence Examples with “Apprise”?

Listed below are the sentence examples with “Appraise”

When to Use the Word “Apprise” in a sentence?

What are the Synonyms of “Apprise”?

“Apprise” is a word that has several synonyms. Some of these synonyms include inform, notify, advice, tell, brief, and others. These words mean to impart knowledge of some fact, state of affairs, or event. The word “apprise” is commonly used in the English language. However, these synonyms are used as an alternative in constructing sentences. For example, “Anna came to inform (apprise) us that the work had been successfully completed.” Another example is, “The executive assistant came to notify (apprise) us that the erection of the monster machine had been successfully completed.” The two words from the sample sentences are used as an alternative for the word “appraise.”

What are the Antonyms of “Apprise”?

Listed below are the antonyms of Apprise.

How to Spell “Apprise”?

What are the prepositions and helper words for Apprise?

Comparison between “Appraise” and “Apprise”

The table below shows the comparison between the words “appraise” and “apprise.”

Why are “Appraise” and “Apprise” misused and interchangeably in English?

Are “Appraise” and “Apprise” the most commonly misused English words?

What are the other similar Misused Word Pairs like “Apprise” and “Appraise” in English?

English has a lot of words that have almost the same spelling and pronunciation. Aside from “appraise” and “apprise,” there are more English word pairs that are misused. Most pairs are homonyms or words that have the same sounds but different meanings. The words are misused because the pair sounds alike and sometimes are spelled similarly. The best way to correctly use the words and avoid confusion is to understand the meaning and context in which a word is used.

Listed below are the word pairs that are misused, like “appraise” and “apprise.”

How do Content Writers use “Appraise” and “Apprise” in their articles?

Do Content Writers use “Appraise” and “Apprise” in the wrong way?

Do Misused Words such as “Appraise” and “Appraise” Apprise SEO and UX?

Yes, “appraise’ and “apprise” affect SEO and UX. Search Engine Optimization (SEO) is concerned with the quantity and quality of website traffic of a webpage or website from search engines. On the other hand, UX is focused on how users respond to and experience a service, system, or product. UX is concerned with the user’s perception of ease of use, utility, and efficiency. Misused words in the content definitely negatively influence both SEO and UX because the efficiency of the information depends on how the structure of sentences was written. These simple misuse of words causes an extreme impact on the content quality, lessening its engagement.