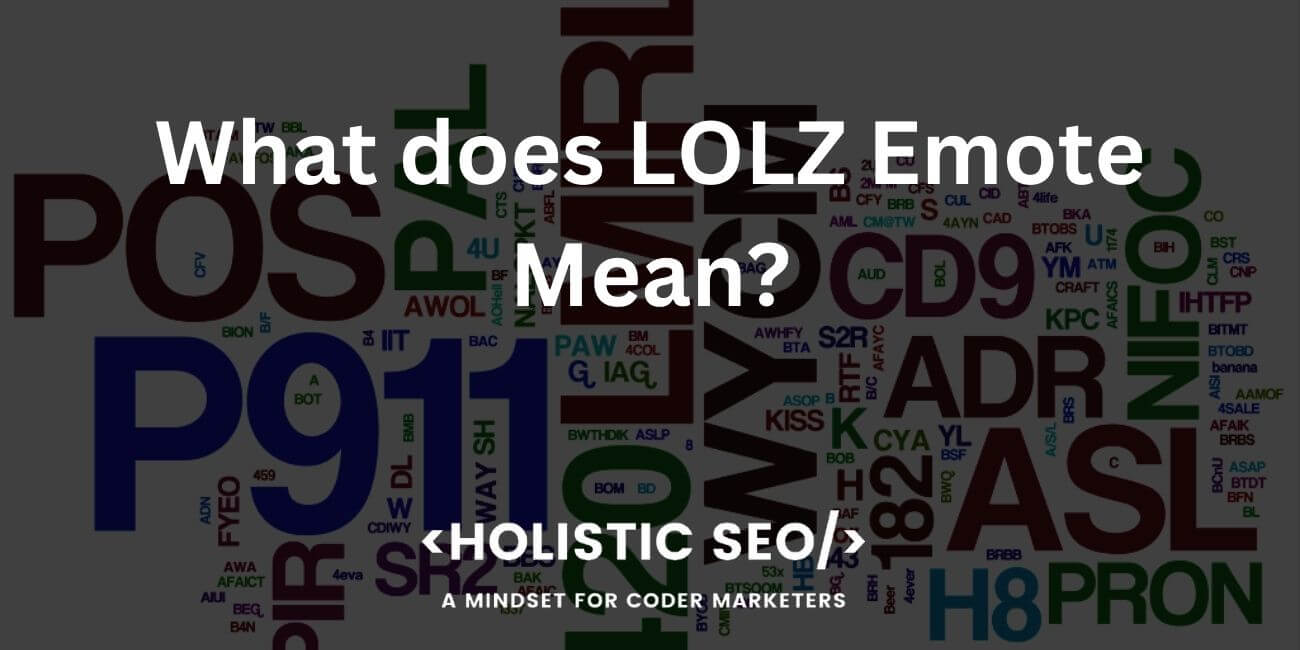 LOLZ emote is a figure or graphic that depicts an intensely laughing face. LOLZ is used to express a lot of strong and loud laughing emotions openly to the audience. The LOLZ emote is most commonly seen in online game platforms to describe a lot of loud laughter in a quicker and convenient yet effective way. LOLZ must be used in funny and casual situations such as friends having a joke time, family members talking about funny and embarrassing moments, or playing online games. LOLZ must not be used during serious topics such as lectures, educational papers, professional discussions, or even just talking about sad moments, as it is offensive and inappropriate. On the other hand, the text LOLZ is internet slang, which is the plural form of LOL, commonly sent when someone is laughing a lot because of a particular message, photo, or video. It is a 4-letter word used to shorten the message but still be able to convey how funny the situation is.

The difference between LOL and LOLZ is that the “LOL” with “Z” is a plural form. Meanwhile, the distinction between LOLZ and ROFL is that the second one’s acronym is “Rolling On The Floor Laughing” which indicates that ROFL is a more intense way of expressing a funny moment. LOLZ, LOL, and ROFL are all part of internet slang. Internet slang is a language used by internet users across the world to communicate with each other in a faster and more convenient way. Internet slang is not an official language, and it has no rules or structure to follow. An Internet meme, on the other hand, is a set of content that is usually abstract, funny, motivating, and entertaining. An internet meme is spread on any social media platform in the form of pictures, videos, or just simple text. Internet meme uses internet slang to express their meaning to the audience.

There is no recorded founder and first usage of the LOLZ abbreviation as of the present time. The word LOLZ was just created by internet users out of fun and laughter exaggeration. It is a variation of the word LOL which was first used in the 1980s by Wayne Pearson. LOLZ is another variant of LOL, similar to other words such as LOLOLOL and LOLS which have different spelling but almost the same meaning.

Do People use LOLZ for face-to-face Communication?

Is LOLZ only for textual communication?

What do Internet Slang Experts think about LOLZ Abbreviation?

Internet slang experts think about LOLZ abbreviation as another variation of LOL which is in a plural form. According to internet slang experts, LOLZ is a leet and corrupted variant of LOL and is considered as a noun rather than a verb or interjection. LOLZ is an acronym and not an abbreviation, which means that it is pronounced as a word and not letter-by-letter. LOLZ is used to express strong laughter and is more commonly used for casual conversations. LOLZ is prohibited to be used in serious and formal content.

What are the sentence examples with LOLZ?

The word LOLZ is a very common expression on the internet. LOLZ is used to shorten and simplify the text while still being able to indicate intense laughter about a particular topic. People talking online with a funny topic opt to use LOLZ to shorten the message and save time from typing.

Listed below are examples of LOLZ in a sentence. “

How does Cambridge Dictionary define LOLZ?

What are the Variants of LOLZ?

As the modern era of technology arises, there are a lot of changes happening on the internet, especially in terms of language. LOLZ is a word that has been given different variants on the internet made by netizens.

Listed below are the variants of LOLZ.

What are the Derivations of LOLZ?

LOLZ just like any other word, has its own derivations. LOLZ has been the product of several additions of letters made by the people on the internet to make another word that expresses a more intense feeling.

Listed below are the derivations of LOLZ.

Internet slang is used to communicate with other people across the internet in a much faster and more convenient way. These words under internet slang are interrelated to each other, and they are expressed in the proper English words as well.

What are the Foreign Equivalents of LOLZ from other Languages?

Internet slang covers a very large scope of languages because people around the world regardless of race and nationality are using it. Hence, different related terms are made that indicate the same meaning as LOLZ.

Listed below are the foreign equivalents of LOLZ from other languages.

How do Content Writers use LOLZ for communicating with Customers?

Content writers use LOLZ in describing fun and entertaining topic in a particular content. However, LOLZ is not usually utilized by content writers, especially when they are writing educational and informative topics such as business and finance, bitcoin, and products. What is a content writer? A content writer is a person whose job is to write relevant articles for different websites found on the internet. Content writers place the word LOLZ in sentences containing jokes and when expressing funny discussions. The purpose of putting LOLZ in SEO content writing is to provide a more interactive, enjoyable, and detailed way of relaying information without having to go lengthy on each sentence.

Do Social Media Marketers use LOLZ?

Does LOLZ a not serious term for SEO Content?

Yes, LOLZ is not a serious term for SEO content. SEO content writing is the process of writing and publishing articles on a digital platform through planning, researching, and editing. The not serious term refers to a set of words that mostly give a humorous meaning and informal writing structure. Most of the SEO content, especially non-entertainment ones, is written formally by the content writers to deliver the information in the most efficient way possible. Putting LOLZ in content that is not funny or entertaining is not appropriate. It does alter the meaning of the content and affects E-A-T negatively.

What is the difference between LOLZ and LoL?

The difference between the two is that LOLZ is the plural and noun form, on the other hand, LoL is the singular and verb form. Apart from being plural and singular forms, the two words do not have other differences, especially in terms of meaning. However, some people use LOLZ to express prolonged and loud laughter and LoL for short-term and loud laughter.

What is the difference between LOLZ and LULZ?

LOLZ “Laughing Out Loud” means someone is laughing a lot in a loud manner. It is because of a funny experience or content found on the internet, while LULZ is the plural form of “Lame Uncomfortable Laugh” which means someone is in an awkward situation or someone has read or heard a bad joke. LOLZ is used to express genuine laughter or sarcasm, on the other hand, LULZ is used to indicate awkwardness or dissatisfaction with a joke and its content. In some cases, LULZ is used to substitute the word LOLZ as for some people, they have the same meaning.