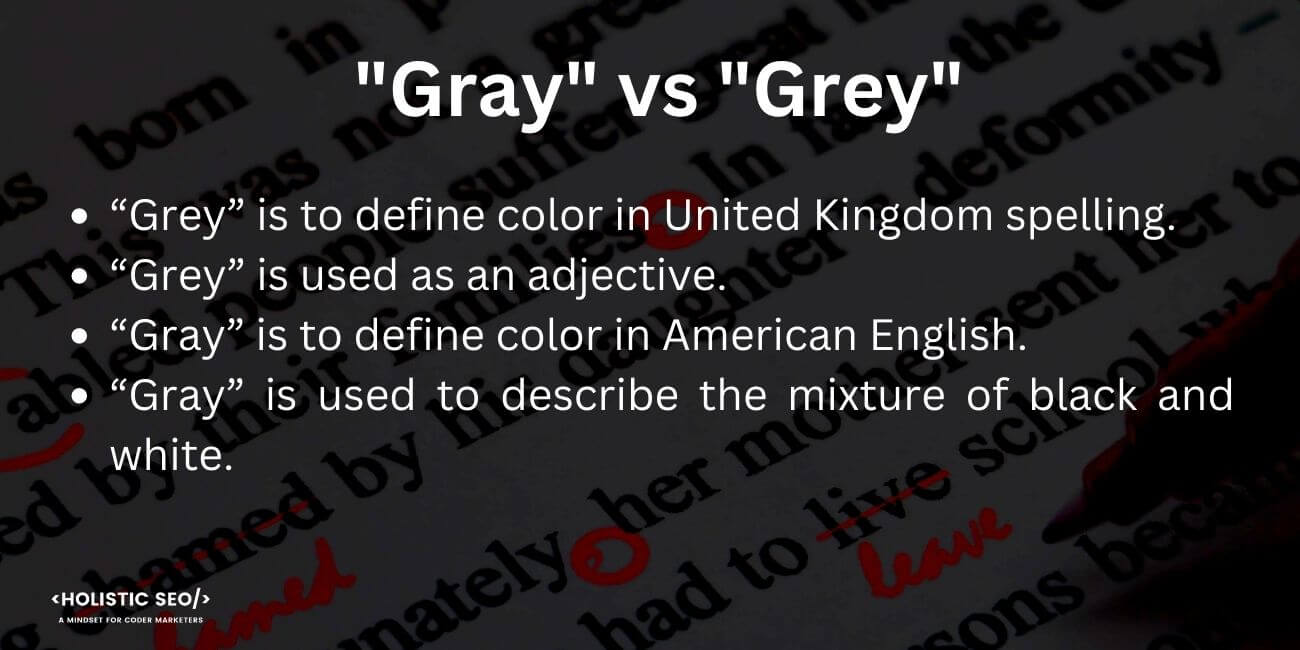 “Gray” and “grey” are two words that are correctly spelled. “Gray” and “grey” are used to describe the neutral color. The primary difference between “Grey” and “gray” is simply a matter of geographic custom and the origin of language. “Grey” is more commonly used in the British English language. On the other hand, “gray” is highly used in the American English language, particularly in the USA and other English-speaking countries around the world. Another difference between “grey” and “gray” is that the first word is spelled with the letter “e” and the second one is spelled with the letter “a.” Regardless of their differences, they still have the same meaning.

The comparison between “grey” and “gray” are listed below.

The type of English language must be considered when deciding whether to use “grey” or “gray” in a sentence. The word “grey” is British English, and it must be used in sentences that are written in a British text setting. On the other hand, “gray” is an American word, so it is recommended to be used in papers that are set in the American language. The relevance and quality of the article are influenced when improper usage of “grey” and “gray” is done by content writers and marketers. Therefore, choosing the appropriate word is very important.

What does “Grey” Mean?

The word “grey” means a color that is between black and white, or a mixture of black and white. It is used as an adjective to describe a neutral color or a dull expression, emotion, or atmosphere. “Grey” is utilized both as a noun and an adjective. The term “grey” originates from the Germanic language word grau and the Old English word grǣg. The etymology of the word “grey” is grai or grei which came from Middle English. The first documentation of the usage of “grey” dates back to 800 CE. “Grey” is a pretty common word in the British English language. It is used on a daily basis, mainly because it is associated with most of the regular things used by people, such as gadgets, clothes, and shoes. The word “grey” is very important for daily life as it is used as a primary name for a specific color.

What are the sentence examples with “Grey”?

Listed below are the example sentences for using the word “grey.”

When to use the word “Grey” in a sentence?

The word “grey” must be used in sentences that require a description of color and mood. Another thing to consider in using the “grey” word is that it must be used in British English texts and articles. For example, in the sentence, “I just realised that the colour of the wall in our kitchen is grey.” The context of “grey” as a word in practical terms is a neutral color due to the mixture of black and white. On the other hand, if “Grey” is used as a metaphor, it pertains to a feeling or atmosphere that is dull or boring. One synonym of the word “grey” is “silvery” which refers to the metallic color that has a resemblance to “grey”.

What does “Gray” Mean?

“Gray” is a word that means, “a color between black and white, similar to ash.” It is usually utilized in sentences as either a noun or an adjective that pertains to a neutral color or boring ambiance. The origin of “gray” is grau from the Germanic language and grǣg from the Old English language. Whereas its etymology is grai or grei from the Middle English language. The first usage of “gray” is documented in the 12th century. According to the Oxford English Dictionary, the meaning of “gray” is “of a color intermediate between black and white, as of ashes or lead.” “Gray” is a very common American English word, due to its presence in clothing, pieces of jewelry and accessories, and tech products.

What are the sentence examples with “Gray”?

Listed below are examples of sentences using the word “gray.”

When to use the word “Gray” in a sentence?

The word “gray” must be used when a sentence topic is about a particular color or ambiance. It is a much more recommended word in American English articles and content. An example of correct usage of “Gray” in a sentence is, “I don’t like to be in that haunted house anymore, it’s not thrilling, it only gives a gray atmosphere.” The word “gray” has two different contexts. “Gray” is a practical word when associated with the color mixture of black and white. On the other hand, if it deals with a boring atmosphere, the word “gray” is considered a metaphor.

What are the synonyms of “Gray”?

The synonyms of the word “gray” are “silvery” and “drab.” The synonym “silvery” is a word that refers to a metallic color that is closely similar to “gray.” An example of “silvery” in a sentence is, “The gown she wore during the pageant is silvery which makes her more stunning among her competitors.” Whereas the synonym “drab” means “deficiency in terms of brightness or interest; drearily dull.” For example, “The salad is somewhat drab, with only lettuce to complement the chicken.” Although “silvery” and “drab” are synonymous with “gray”, they must not be used interchangeably as they possess different meanings and are only suitable for selected topics.

Are the words “Grey” and “Gray” interchangeable?

Comparison between “Grey” and “Gray”

The table below shows the comparison between “Grey” and “Gray.

Why are “Grey” and “Gray” misused and interchangeably in English?

The words “grey” and “gray” are used interchangeably in English, mainly because they have almost the same spelling and completely similar meanings. “Grey” and “gray” only differ with the vowels used, and when it comes to meaning, they are similar and refer only to the same topic. Most beginners in the English language have no idea that there is an appropriate usage for “Grey” and “Gray” words. Although it is acceptable to interchange “grey” and “gray” in an informal setting, when it comes to technicalities, it is entirely incorrect since “grey” and “gray” are intended to be used in specific English language settings. It is highly important to know the distinction between each word to avoid misusing them, particularly in content writing and marketing.

Are “Grey” and “Gray” the most commonly misused English words?

What are the other similar Misused Word Pairs like “Gray” and ”Grey” in English?

Listed below are the most other similar word pair like the words “Gray” and “Grey.”

What are the things should a content writer consider in using the word ”Grey” and “Gray”?

Can content writers use “Grey” and “Gray” in one sentence?

How do Content Writers use “Grey” and “Gray” in their articles?

Do Content Writers use “Grey” and “Gray” in the wrong way?

Do Misused Words such as “Gray” and “Grey” affect SEO and UX?

Yes, misused words such as “gray” and “grey” affect SEO and UX. “Grey” and “gray” are used in different kinds of English language and misuse of these words affects the relevance and engagement of particular content. The SEO of the content is hindered when misusage is found. The search engine is highly critical when it comes to keywords, which directly affects the search ranking of an article if the incorrect form was used. For instance, the article is set to be published on the British platform, its search engine is integrated into the British language; hence, it prioritizes articles with the correct form. On the other hand, in terms of User Experience (UX), readers prefer the language that is based in their countries. Using the words “grey” and “gray” in one article negatively affects the experience of the readers, which results in poor User Experience (UX). Therefore, it is very significant to use them appropriately to avoid having a low engagement, ranking, and rating.