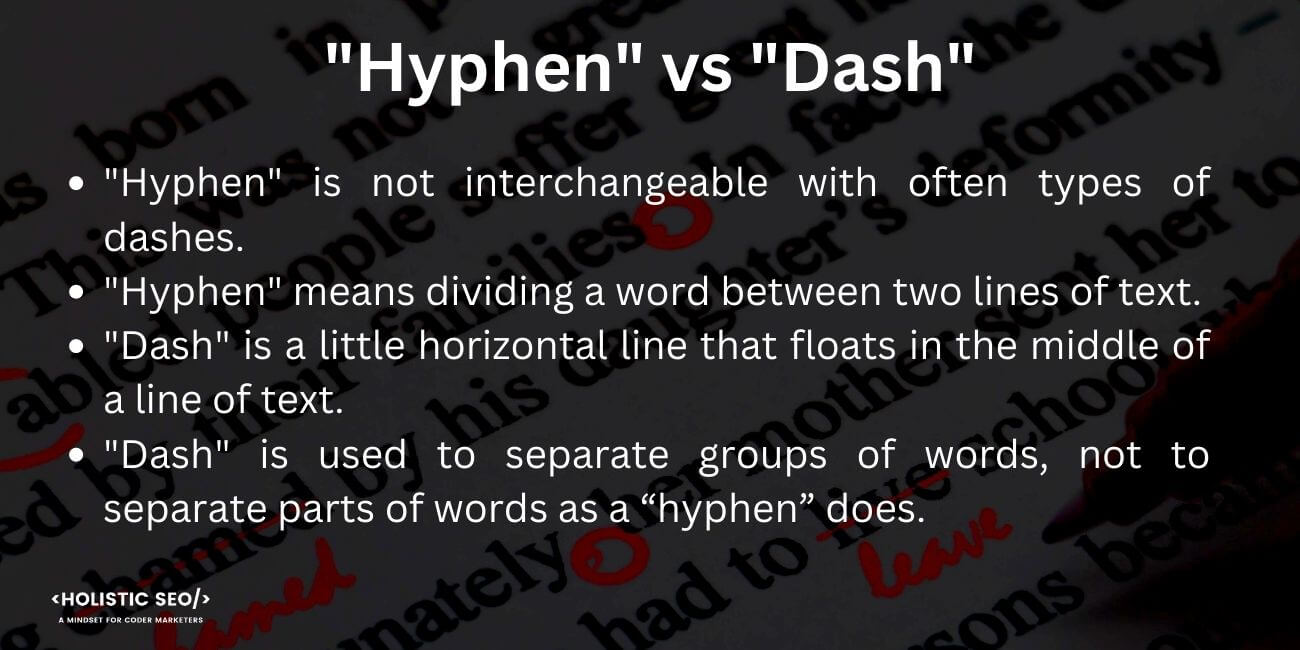 “Hyphen” and “dash” are two of the most commonly misused and confused punctuation marks. A “hyphen” is known as a short line (-). It is used to connect the parts of a compound word or the parts of a word divided for any purpose. Meanwhile, “dash” is a horizontal line showing a pause or break in meaning. The use of a “dash” sometimes represents missing words or letters. There are common misinterpretations and misuses of “hyphen” and “dash,” especially for those who are non-native English writers or have a different mother tongue. The punctuation marks “Hyphen,” and “Dash” difference is mostly highlighted in their meaning, spelling, and usage. “Hyphen” and “dash” are misused and confused because the two punctuation marks have almost the same symbol.

The differences and comparisons between “Hyphen” and “Dash” are listed below.

Generally, it is essential to identify when and which punctuation marks must be used in a sentence to deliver the correct structure of the sentence. Understanding the meaning allows the writer to identify in which context the “hyphen” and “dash” are used to convey a clear message. These punctuation marks that have almost the same symbol are often misused. It results in mistakes in word structure. It is a must that writers do proofread to check if there are any punctuation marks mistakes or word errors in their articles.

Understanding the meaning and the context of “hyphen” and “dash” is a must. Having a clear knowledge of these types of punctuation marks allows the writer to identify the context in which the “hyphen” and “dash” are used to convey a clear message. For example, “The client expects a three-to-four-week delay in processing.” The “hyphen” is correctly used because it connects the parts of a compound word. Another sentence example is for the punctuation mark “dash.” “ The years 2001–2003.” The dash is correctly used to show the range of years.

One of the people’s questions is, “Why to know the difference between “hyphen” and “dash” for content writing and marketing?” The answer is that it is beneficial to write better content and communicate healthily. Processing knowledge regarding the distinction between the two punctuation marks helps content writers and marketers convey appropriate messages to audiences and readers. Proper usage of “hyphen” and “dash” offers a way to correct the structure of sentences and avoid the possibility of errors and incorrect grammar. Furthermore, knowing the difference between “hyphen” and “dash” indicates that the content writer and marketer have expertise in writing and making content, and thus readers put trust in their crafts.

What does “Hyphen” Mean?

What are the sentence examples with “Hyphen”?

Listed below are the sentence examples with “Hyphen”.

When to use the word “Hyphen” in a sentence?

“Hyphens” are mostly used in compound words. Compound words, such as self-restraint, are “hyphenated.” For example, numbers between twenty-one and ninety-nine must be “hyphenated.” “Hyphenated” words tend to become closed compounds or single words with no “hyphen” over time. For example, the word “email” instead of “e-mail.” The term “email” is an excellent example of how it is becoming increasingly common to become a single word. Furthermore, a “hyphen” is additionally used with a compound modifier before a noun. A compound modifier comprises two or more words that must be understood as a unit. In other words, it is called a phrasal adjective.

What are the synonyms of “Hyphen”?

What does “Dash” Mean?

A “dash” is a little horizontal line that floats in the middle of a line of text. It is not at the bottom because that is an underscore. A “dash” is longer than a “hyphen” and is commonly used to indicate a range or a pause. The usage of “dash” is to separate groups of words, not parts of words, as a “hyphen” does. Remember that “dash” is rather informal and must be used carefully in writing. Sometimes a “dash” does not contain a space on either side of it. The “dash” comes from the Middle English word “dasshen”. It derives from the Middle French dachier, which means “to break”. The “dash” first appeared in writing in the 1550s. The “Dash” took on specific roles in the late 1800s. The word “Dash” is a punctuation mark commonly used in the English language. It is an important punctuation mark used in daily life because it is used to add parenthetical statements or comments in much the same way as an alternative usage of brackets. “Dash” is used to create emphasis in a sentence.

What are the sentence examples with “Dash”?

Listed below are the sentence examples with “Dash”.

When to use the word “Dash” in a sentence?

There are two types of “dash”. The two types of “dash” are the “N dash” and “M dash”. “N dash”, which are about the width of an upper-case N, are usually mistaken for “hyphens.” However, the “dash” function as a kind of super “hyphen.” “Dash” are meant to give an extra connection when having a compound modifier that includes a multi-word element that is not able to be easily “hyphenated.” For example, the phrase “Elvis Presley–style dance moves” uses an “n dash” because “Elvis-Presley-style dance moves” are uncomfortable. “Elvis Presley” is not a compound modifier, it looks odd when hyphenating it. Keep in mind that not all readers notices the “n dash” or understand what it means. Furthermore, “n dash” is additionally used to show ranges of numbers such as times, and page numbers of scores. For example, “The class schedule is from 4:30–5:00.” However, outside of formal printed publications, the “m dash” is commonly replaced with a simple “hyphen.” “M dash” is about as wide as an uppercase M. It is a relatively artistic punctuation mark compared to the technical “hyphen” and “dash.” An “m dash” is often used to indicate a pause in a sentence. It is stronger than a comma but weaker than a period or semicolon. For example, “The new nurse—who was wearing the same blue scrubs as the old nurse—entered the room with a tray of egg”

What are the synonyms of “Dash”?

How is the pronunciation of “Hyphen” and “Dash”?

The words “hyphen” and “dash” are both punctuation marks, which is correct in terms of spelling. The word “Hyphen” is pronounced as “hai·fn” while the word “Dash” is pronounced simply as “da-sh.” The word “hyphen” is spelled as “H-Y-P-H-E-N”. It is composed of two syllables, “hyp-hen.” On the other hand, the word “Dash” is spelled as “D-A-S-H.” It is composed of two syllables, “da-sh.”

Comparison between “Hyphen” and “Dash”?

The table below shows the comparison between “hyphen” and “dash.”

Why are “Hyphen” and “Dash” misused and interchangeably in English?

The punctuation marks  “Hyphen” and “Dash” are misused and sometimes interchanged in English because their symbols are almost identical. The symbols are the same yet their meanings and origins are entirely distinct from one another. “Hyphen” and “Dash” are misused and interchanged by people because the two are not only pronounced the same way, but it is because of the spellings. The solution to avoid misusing the two words is to learn their meanings. People who learn the words “Hyphen” and “Dash” together are confused according to the look of the symbol and the almost same figure. Rarely, people are confused by “Hyphens” and “Dash” because of how the words are typed. However, the only solution to grammatically and correctly using “Hyphen” and “Dash” is understanding and comprehending the definition and to what context the words are applicable.

Are “Hyphen” and “Dash” the most commonly misused English words?

Yes, the punctuation marks “Hyphen” and “Dash” are the most commonly misused English words. “Hyphens” and “Dash”  are not only misused but people are confused by the symbols. However, to determine what punctuation mark is used in a sentence, it is a must to know their difference in terms of spelling. The word “Hyphen” is used to join words or parts of words. On the other hand, the word “Dash” is longer than a hyphen, which is used to indicate a range or a pause. The symbols are almost the same, which causes confusion for people. Confusion about the two punctuation marks results in misused English words. The symbol for “Hyphen” is ‘-” while the symbol for “Dash” is “–.” Most people who are not that skilled in English would probably think that “Hyphen” and “Dash” exist as one and are allowed to use them both in the same context.

What are the other similar Misused Word Pairs like “Dash” and “Hyphen” in English?

Listed below are the similar-misused word pairs like “Hyphen” and “Dash” in English.

What are the things should a content writer consider in using the word “Hyphen” and “Dash”?

It is important for content writers to understand the definition or the meaning of the punctuation marks “hyphen” and “dash.” There are things to remember and consider when writing content, such as the definition and usage of punctuation marks. Use a dash to show a pause or break in meaning in the middle of a sentence. Use a “hyphen” to form a single idea from two or more words. Additionally, a “hyphen” is used to avoid duplicate vowels and tripled consonants.

Can content writers use “Hyphen” and “Dash” in one sentence?

“Hyphen” and “Dash” are two different punctuation marks with distinct meanings from one another. However, it is possible to use them both in one sentence. It is essential to remember the purpose of a punctuation mark. The placement of punctuation marks within the sentence structure gives a more explicit message to the readers, and the other words are used to properly convey a message. Remember that “hyphen” is placed where the message is to connect the parts of a compound word or the parts of a word divided for any purpose. “Hyphens” are indications that mean to connect the parts of a compound word. “Dash” is a little horizontal line that floats in the middle of a line of text. There are 2 common types of dashes. The two common types are the “n dash” (–) and the “m dash” (—). One example of the “m dash” (—) is “I pay the bills—she has all the fun”.

How do Content Writers use “Hyphen” and “Dash” in their articles?

Do Content Writers use “Hyphen” and “Dash” in a wrong way?

Do Misused Words such as “Dash” and “Hyphen” affect SEO and UX?

Yes, “hyphen” and “dash” influence SEO and UX. Search Engine Optimization (SEO) is concerned with the quantity and quality of website traffic to a webpage or website from search engines. On the other hand, UX is focused on how users respond to and experience a service, system, or product. UX concerns the user’s perception of ease of use, utility, and efficiency. Having misused words in the content negatively impacts both SEO and UX because the efficiency of the information depends on how the structure of the sentences was written. These simple misuses of punctuation marks cause an extreme impact on the quality of the content, which lessens its engagement.