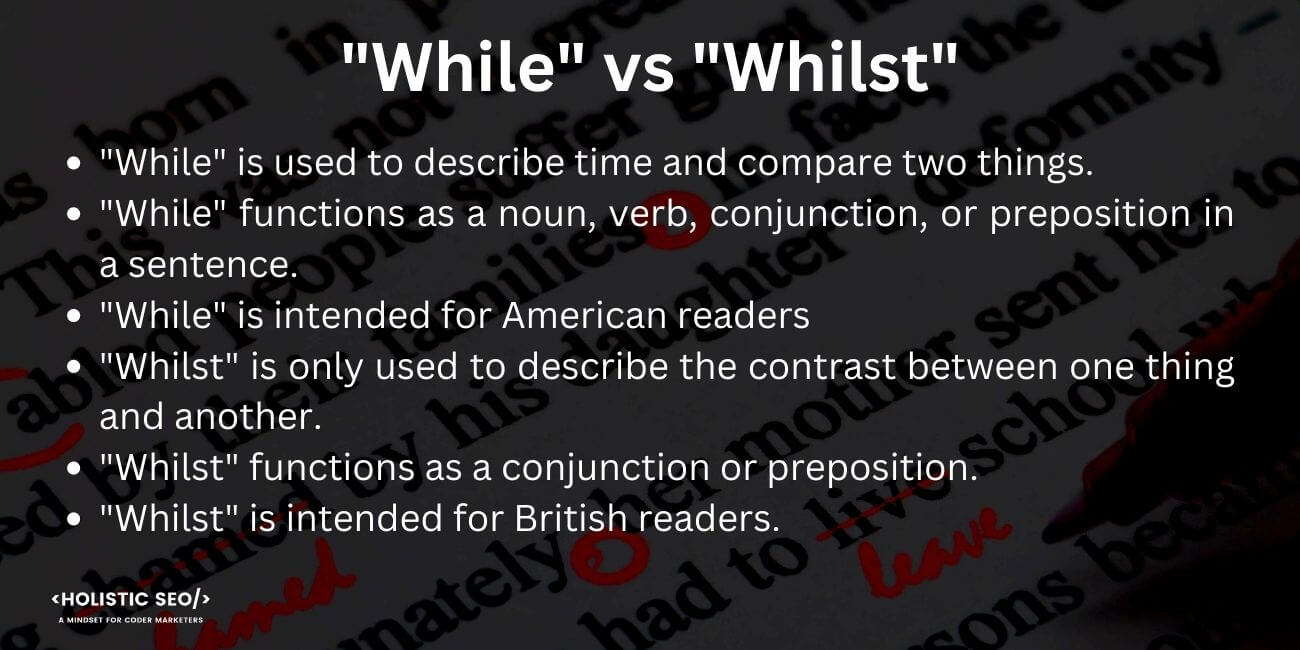 The differences and comparisons between ”While” and “Whilst” are listed below.

Content writers must know how to use “While” or “Whilst” to write better content and communicate more healthily. The author must know first what words to use. To know what word is supposed to be used, determine the desired meaning of the sentence and who the target readers are. Use “while” if the intended readers are American. For example, “The children play outdoors while the parents watch over them.” On the other hand, use “whilst” if the intended readers are British. Additionally, do not use “whilst” as a verb or noun. For example, “The customers waited for a whilst before getting served” is wrong. The sentence should be “The customers waited for a while before getting served.”

What does “While” Mean?

The word “While” is a common English word that typically refers to the period when short and marked by the occurrence of an action or a condition. According to the Oxford Dictionary, “While” is defined as “during the time that something is happening” or “at the same time as something else is happening.” “While” acts as a noun, verb, preposition, and subordinating conjunction in a sentence. The word’s meaning generally varies based on its function in the sentence. It is an important word for daily life mainly because it helps compare two things. “While” as a noun and conjunction has been first used before the 12th century. As a noun, the word came from the Old English word “hwile” or “hwil” from Proto-Germanic, meaning “a space of time.” Proto-Germanic is a language derived from the proto-language of the Germanic branch of the Indo-European languages. “While” as a verb means “to cause the time to pass” or “to occupy someone or something for a time.” On the other hand, the word as a preposition was first used in the 15th century. It is one of the three most common prepositions of time, along with “For” and “During.” “While” as a conjunction is used to connect two separate clauses that occur at the same time. Whereas “While” as a verb was first used in 1635.

What are the sentence examples with “While”?

Listed below are the sentence examples with “While.”

When to use the word “While” in a sentence?

How often is the word “While” used in a sentence?

The word “While” is regularly used in a single sentence more than once, given that they serve different functions in the sentence. The sentence is still grammatically correct if “while” is used in the sentence more than once, as long as it does not have the same function. For example, “While the teacher is discussing in front of the class, the students while away time conversing with one another.” The example sentence shows that the first “While” describes the time when the teacher is discussing at the same time the students are spending their time. On the other hand, the second “while” refers to an action word that indicates the process of the students spending their class time talking with each other.

What are the synonyms of “While”?

The word “While” has various synonyms. These words are “when,” “during”, “whereas,” “but,” and “although.” There are some cases that”when,” “during”, “whereas,” “but,” and “although” have the same meaning but must be used on different occasions. For instance, the word “when” refers to a specific time. For example, “The mother cooked when (while) the children were playing.” The sentence indicates the time or period when the subjects are doing something. The word “while” is allowed to be used instead of “when.” However, the other words do not. Using the word “but” or “although” to replace the word “when” is going to create a whole new meaning to the sentence. For instance, “The mother cooked, but (while) the children were playing.” The sentence now seems incomplete, or the wrong accompanying words were used. The word “but” compares two different things or actions. The sentence should be “The mother cooked, but the children kept playing and missed dinner.” The same goes for the word “although.” For example, “The mother cooked, although (while) the children were playing.” It has the same meaning as the word “but.” It is an incomplete sentence as well and is going to mean different compared to when the word “when” is used. Despite being synonyms of the word “while,” they must be appropriately used to convey the right message in a nutshell.

What does “Whilst” Mean?

What are the sentence examples with “Whilst”?

When to use the word “Whilst” in a sentence?

The word “Whilst” is used when writing content in the British English language for British readers to understand. Typically, only British people use the word “Whilst.” They use it instead of using the word “While.” “Whilst” must not be used if the intended readers are American, as it confuses them. Additionally, “Whilst” is used to replace “While” and its other preposition and conjunction word synonyms. The word “Whilst” compares two things. Typically, the word is used for the comparison of two different things. For example, “The house in New York has a garage, whilst (while) the house in Tennessee does not have a garage.” The content writer uses “whilst” instead of “while” to make the sentence understandable to the British readers.Instead of using the word while the writer replaces it with the word whilst to make more sense to British readers.

How often is the word “Whilst” used in a sentence?

What are the synonyms of “Whilst”?

“Whilst” and “While” have similar definitions, in fact, “whilst” is one of the synonyms of “while.” However, the other synonym of “while” is not the synonym of “whilst.” Remember, “whilst” only functions as a conjunction and preposition, in contrast with “while,” which functions as a noun, verb, conjunction, and preposition. The synonyms of “Whilst” are “whereas,” “while,” and “as.” For example, “As (Whilst) the father works, the mother takes care of their children.” The “whilst” is a preposition that indicates two different things occurring simultaneously; the father works, and the mother takes care of the children. Another example is, ”Diana is 19 years old, whereas (whilst) Keanu is 15 years old.” The word “whereas” replaced the “whilst,” which is a conjunction with comparing two things.

What is the pronunciation of “While” and “Whilst”?

Comparison between “While” and “Whilst”

The table below shows the comparison between the terms “while” and “whilst.”

Why are “While” and “Whilst” misused and interchangeably in English?

Are “While” and “Whilst” the most commonly misused English words?

What are the other similar Misused Word Pairs like “Whilst” and “While” in English?

Listed below are similar misused word pairs like “Whilst” and “While” in English.

What should a content writer consider in using the words “While” and “Whilst”?

There are a few factors a writer must consider when using the words “while” and “whilst.” First, the writer must know the target readers. The article’s readers must understand the content of what they are reading. Content writers must keep in mind the right usage of words. The words to be used must align with the type of reader to properly convey the right message and to prevent bounce rates on a webpage. An excellent content writer must be aware of the E-A-T in search engine optimization (SEO). E-A-T refers to expertise, authority, and trustworthiness. They must exhibit proper usage of words, such as “while” and “whilst” for the content writers’ articles to rank in the search engine. Content writers must know their target readers to know what word is supposed to be used. The content is going to have a higher E-A-T score, resulting in an influence on Google’s search engine ranking.

Can content writers use “While” and “Whilst” in one sentence?

How do Content Writers use “While” and “Whilst” in their articles?

Do Content Writers use “While” and “Whilst” in the wrong way?

Yes, there are instances that content writers use “While” and “Whilst” incorrectly. Since “while” is the most common word to be used rather, mainly because there are over 300 million Americans in the United States alone in 2022, according to the census. On the other hand, there are only more than 60 million British in the United Kingdom alone in 2022. It is only natural to use “While” instead of “Whilst.” Additionally, American English is more commonly taught in other countries besides the United States. On the contrary, British English is only taught in a few countries, such as Canada, Australia, New Zealand, and Ireland. There are instances in content writing that writers use “while” instead of “whilst” despite their readers being British or speaking the British American language. Furthermore, some content writers use “whilst” instead of “while” even if their readers speak American English.

Do Misused Words such as “Whilst” and “While” affect SEO and UX?

Yes, misused words such as “While” and “Whilst” affect Search Engine Optimization (SEO) and User Experience (UX). Grammatical errors like incorrect spelling and usage of words in writing unintentionally change what authors want to convey. The sentence is going to convey a different meaning to the reader in instances where a word is misused in a sentence. Additionally, a word with the wrong spelling conveys unprofessionalism. Moreover, incorrect grammar disturbs the flow of one’s writing as it influences the user experience of a reader and causes misinformation. It gives the impression that the author is not knowledgeable, skillful, or credible enough to write high-quality content. Quality content matters in Search Engine Optimization (SEO). Most websites that rank top contain quality written articles. Poorly written articles with misspelled and misused words are going to hurt a website. According to surveys conducted by some agencies, on average, 59% of consumers would not buy from an online shopping site with bad spelling and poor grammar.