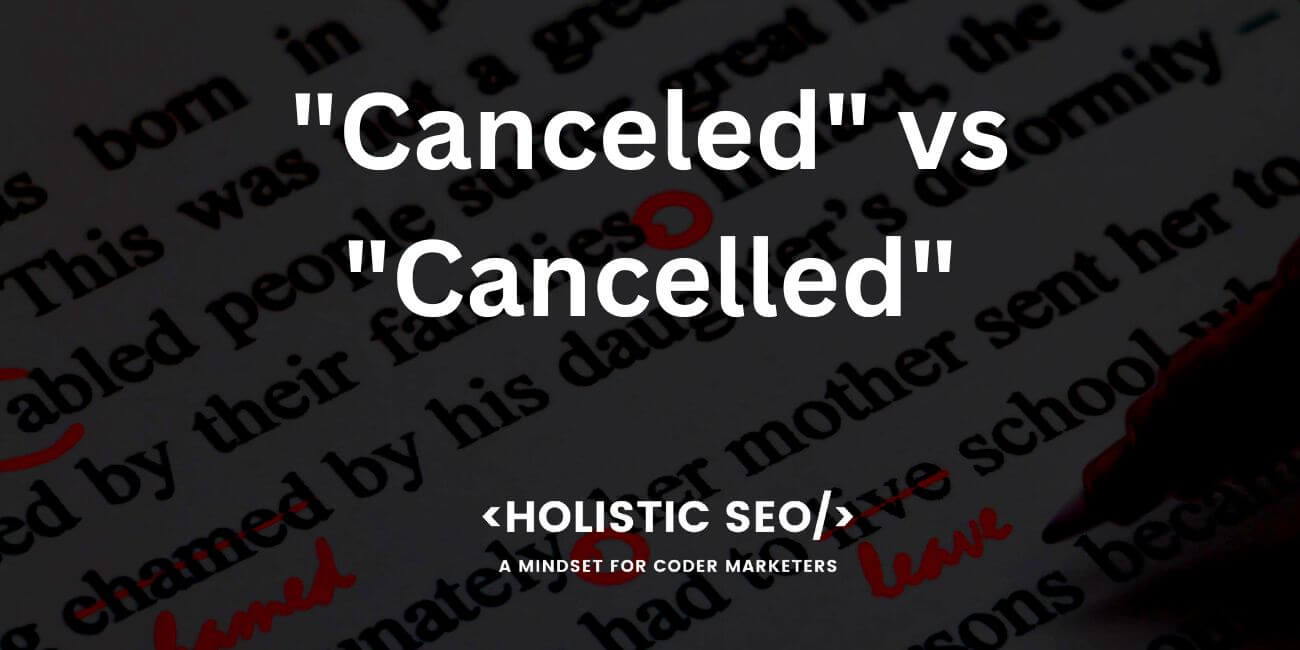 “Cancelled” vs. “Canceled has the same meaning. Oxford Dictionary defines the two words as the term used to indicate “when something did not happen or occurred.” However, “Cancelled” and “Canceled as a whole new other meaning if they are used along with a name of a celebrity, public figure, or “get.” The sentence means that someone, the subject, or the one being “canceled,” has stopped receiving support from the public when used with those words. “Cancelled” is more often used in British English, while “Canceled” is used in American English. The reason for the one-letter distinction was that Noah Webster, author of Merriam-Webster, simplified the English words adapted by the North Americans when the Britains colonized them. The word is spelled C-A-N-C-E-L-E-D in American English, while in British English, it is spelled, C-A-N-C-E-L-L-E-D. Moreover, the two words have the same pronunciation. They are both pronounced as “kan-seld.” The words came from the Latin word “cancelli” and “cancellare,” meaning “crossbars.” The term was derived from the Old French word “canceller,” a device used to delete something.

Canceled vs. Cancelled in American English

“Canceled” is more frequently used in American English. American English is the revised and simplified form of the words, eliminating the extra “L” in the “cancelled.” The fixed American English spelling was not fixed when the British colonized North America. Additionally, Noah Webster, a lexicographer and founder of Merriam-Webster, tried simplifying and shortening English words. For example, colour, flavour, neighbour, oestrogen, and plough become color, flavor, neighbor, estrogen, and plow, respectively. Therefore, the sentence “My sister prefers that flavour of ice cream on top of the other” becomes “My sister prefers that flavor of ice cream on top of the other.”

Listed below are sentence examples of Canceled vs. Cancelled in American English.

Canceled vs. Cancelled in British English

Listed below are sentence examples of Canceled vs. Cancelled in American English.

What is the Difference between Canceling and Cancelling?

Canceling and Cancelling have a single difference; their spelling. “Cancel” is often used by Americans, while “Cancelling” is used by Britishers, Canadians, Australians, and New Zealander or Kiwis. Despite their different spellings, the two words share similar meanings. “Canceling” or “Cancelling” is defined by Oxford Dictionary as the “process of not allowing something to happen or take place.”

What is the spelling difference between Canceled vs. Cancelled?

“Canceled” and “Cancelled” slightly differ in their spellings. The distinction is only one letter, “L.” The first one has eight letters, C-A-N-C-E-L-E-D. Similarly, the latter has eight similar letters but an extra “L.” Besides the single-letter distinction, the two words are almost identical.

What is the Origin of Single-L Canceled in English?

The origin of the Single-L Canceled in English is when the author of Merriam-Webster, Noah Webster, tried simplifying the English words in 1828. The British adapted North Americans words and how they were spelled when North America was colonized by the British. Therefore, Samuel Johnson created a dictionary, A Dictionary of the English Language, in 1755. The British widely used the dictionary. However, Webster’s tried revising and simplifying these words. Thus, the birth of the well-known dictionary, Merriam-Webster. Noah tried simplifying as many terms as possible, such as removing double letters in the sentence and changing the spelling completely. Unfortunately, Noah’s effort in simplifying some words has not been accepted, like “tongue” to “tung.”

What is the Definition of “Get Canceled”?

“Get Canceled” has been widely used nowadays. Most of the time, “get canceled” is used for celebrities or any known public figures. “Get Canceled” is defined by Merriam-Webster as a way of “stop supporting” a person. Therefore, when a public figure, such as a celebrity or other famous people, gets canceled, they lose support from the public. The lack of support results in the public not listening to their music, watching their movie, or not buying anything related to them. Nowadays, there are a lot of known famous people who are getting canceled. The term “get canceled” or “get cancelled” started during the late 2010s and has been used up until now. The late 2010s started the “cancel culture,” wherein the public calls out a known persona regarding what they did or said that does not align with their beliefs and values.

How to use “Get Canceled” in American and British English?

“Get Canceled” is used in American and British English the same way, mainly because of their same meaning. The writers use “canceled” when the writer, company, or intended readers are Britishers, Canadians, Australians, New Zealanders, or Kiwis. One must indicate in the sentence the person that is being canceled to use the word. For example, “The singer got canceled because he said inappropriate things at the interview.” The sentence means that the singer stopped receiving support from the public as a consequence of what the singer said or did.

How to Use “Canceled” or “Cancelled” in SEO Content Writing?

“Canceled” or “cancelled” must be used appropriately in Search Engine Optimization (SEO) Content Writing. First, the writer must determine what message they want to convey to their readers. Although they both have the same meaning, the writer must still consider what meaning of “cancel” they want to use the correct helping words. “Canceled” or “Cancelled” on its own means “preventing something from happening or occurring.” However, using the word with other helping words, such as “get” or the name of a known public figure, the sentence means that someone stopped receiving support. The content writers must be aware of the correct usage. Despite “Canceled” and “Cancelled” being both correct, they have the proper usage. Grammatical errors like incorrect spelling and usage of words in writing change what authors want to convey unintentionally. It delivers a different meaning to the reader. Additionally, a word with the wrong spelling conveys unprofessionalism when a word is misused in a sentence. Incorrect grammar disturbs the flow of one’s writing as it affects the user experience of a reader and causes misinformation. It gives the impression that the author is not knowledgeable, skillful, or credible enough to write high-quality content.

What should Content Writers know about “Canceled” vs. “Cancelled”?

Why does American English differ from British English for the “L” count in the “cancel” word?

What are the other confusing phrases besides “canceled vs. cancelled” in English?

Listed below are other confusing words besides “canceled vs. cancelled.”