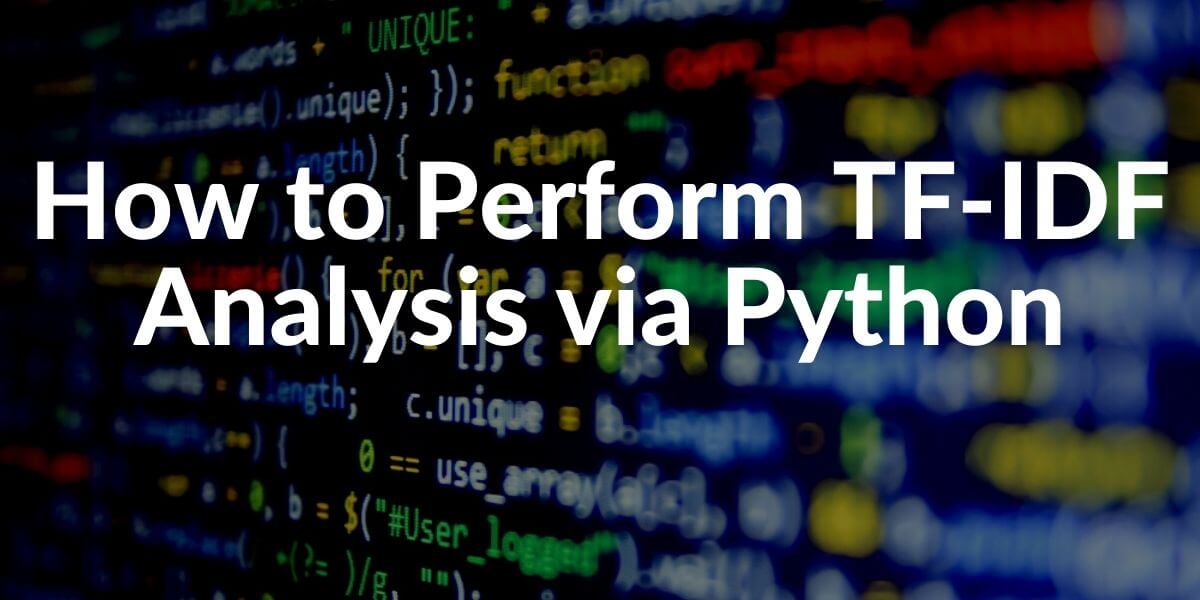 TF-IDF Analysis is one of the oldest methodologies to understand the context. Calculating the weights of a word in a document can help SEOs to understand documents on a SERP for a specific query or a web entity’s content structure and methodology. TF-IDF or Term Frequency and Inverse Document Frequency is useful to extract the related entities and topical phrases. It also skims the “stop words” and by scanning all the documents, extracts the main terms on a document. Performing a quick and efficient TF-IDF Analysis via Python is easy and also useful. We recommend you to not to “focus on numbers” for optimizing content instead of user-friendliness, but you can use these techniques for quick analysis in scale.

In this article, we will use the Scikit-Learn Library of Python and some necessary methods, class, and functions along with the Pandas Library.

How to Perform TF-IDF Analysis for Text Valuation via Python

Term Frequency – Inverse Data Frequency methodology tries to understand the text’s purpose and topic according to the words’ frequencies according to each other. Computers can’t understand the texts but they can change the words into numbers so that they can extract the relationships between them. In TF-IDF Analysis the words’ usage amount is actually not important. Because, usually the most used words in a text are “stop words” such as “will”, “and”, or “you”. These words say nothing about the purpose of the text, so we will try to figure the content’s context by these principles.

To learn more about Python SEO, you may read the related guidelines:

What is the Term Frequency?

What is Inverse Data Frequency?

It is the frequency of the least used words in a text.

How does Inverse Data Frequency and Term Frequency Work Together?

By using these two metrics, we can extract the important words to see the content’s purpose by skimming the stop words.

To perform TF-IDF Analysis via Python, we will use SKLearn Library. Scikit-Learn is the most useful and frequently used library in Python for Scientific purposes and Machine Learning. It can show correlations and regressions so that developers can give decision-making ability to machines. SK-Learn Library has also a “feature extraction” component for text documents. Thanks to it, we will turn a raw document into a matrix and we will calculate every word’s weight in a document. After the calculation, we will turn every matrix element into a data frame row.

To start with, I have chosen 6 example sentences from a history book which tells about the creation of “Balkan Pact” in the late 1930s by Mustafa Kemal Atatürk, founder of the Turkish Republic. First, we need to import the sentences we want to use and Python modules.

Below, we are creating our document within a list of sentences for TF-IDF Analysis with python coding language.

We have imported CountVectorizer, TFIDFTransformer, and TFIDFVectorizer for calculating the TF-IDF Scores every word in the sentences. And Pandas is for creating the data frame. CountVectorizer is for turning a raw document into a matrix of tokens.

The explanation of the code block above can be found within the list below.

You may see the result below:

We see our Matrix and its shape along with the occurrence count of the words. You may also call it in arrays.

Yes, it says nothing for a human but it has lots of meanings for a computer. First, we will use TFIDFTransformer for calculating the TF and IDF values separately.

Below, you can see the explanation of the code block.

These are the IDF Values for our sentences. As you see the non-important words which may not tell the context has lower IDF since they appear in every sentence. Inverse Document Frequency Score is inversely proportional to the usage frequency of the word. Now, we can calculate the TF-IDF Scores based on IDF values.

Besides the words from the first sentence have a 0.0 score because we didn’t include them in our data frame with the “first_document_vector=tf_idf_vector[1]” line. If you check the first sentence from our “docs” variable, you may see the more used words have lower TF-IDF scores, the more unique words have more TF-IDF Scores, in this way we are skimming the stop words.

Now, we will perform the same process in a easier way thanks to TFIDFVectorizer.

We have used fit and transform methods at the same time on our “docs” variable via it. The rest is actually the same as the code block above. You may see the same result below:

For Text Analysis via Python, there are hundreds of different methods and possibilities. Google doesn’t use TF-IDF Analysis in their algorithm according to their explanations but still comparing and analyzing the content profiles of different HTML Documents via TF-IDF Analysis for certain queries may help an SEO to see the competitors’ focus on a topic. For optimizing content, you shouldn’t care about the numbers in algorithms, you should care about the user-friendliness. For now, our TF-IDF Analysis Article has lots of missing points, we will improve it by time:

4 thoughts on “How to Perform TF-IDF Analysis via Python?”