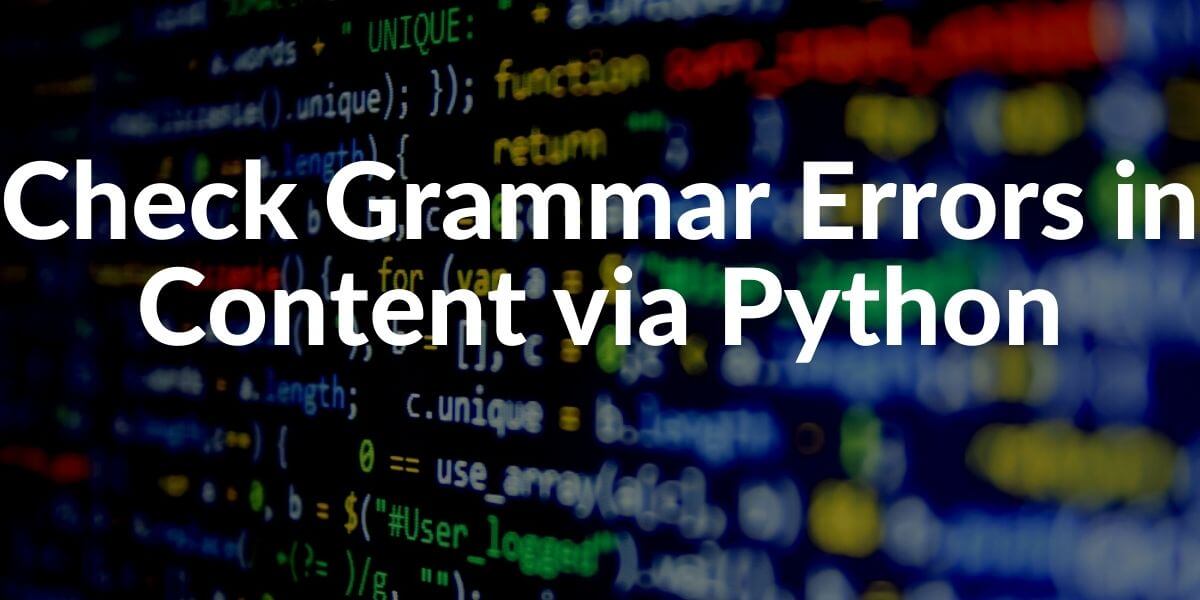 When it comes to SEO, spelling errors, word errors, inverted sentences are factors that affect the user experience and damage the publisher’s expertise. Google Algorithm has been competing since the era of Panda and RankBrain Algorithms to spot both “stemming” and spelling errors, correct them, and rewrite queries. Google has also released a style guideline for Developers. This guideline states how dates, phone numbers, or quote phrases should be written, and that Google will reduce its Quality Score at the point of misspellings. In this guideline, you will see how you can discover and correct spelling errors in large texts through Python for an SEO or publisher.

In addition, it is possible to obtain the automatic features of ScreamingFrog such as discovering new Content Scanning and Grammar Errors with scripts you will write yourself.

How to Check Grammar Errors with Python?

In reality, there is not so much option for correcting or exploring the Grammar Errors in Python as a specific library. As a beginning, we will start with the TextBlob Library. TextBlob is a text processing library that has Natural Language Processing’s all possibilities such as tokenization, lemmatization, or part-of-speech tagging and sentiment analysis. TextBlob’s one of the side hustles is correcting the grammar errors, it may not show the grammar errors for the user but correct them automatically. Let’s perform a simple example.

As you may see, TextBlob is correcting the words according to the sentence’s meaning and word variations closeness to each other. But still, since TextBlob is not created for finding and correcting grammar errors, you may get some errors in more complex usage. To create a strong enough grammar error corrector via TextBlob requires a training model with an enormously large data. TextBlob mainly should be used for Natural Language Processing in a brief project. Without trained data set, you may encounter errors such as below:

As you may see, it couldn’t fix the “las” typo along with a long interpretation related to the “hell” typo, it should be turned into “hello”. To prevent these kinds of errors, you may need to train enormously big data.

To learn more about Python SEO, you may read the related guidelines:

So, in short, we need to try grammar errors exploring and correcting with another methodology.

Our second try will be the “gingerit” library. Gingerit works based on the grammar error correcting software “gingeritsoftware.com’s API”. Since, the company’s software solely focus on grammar error checking and correcting, it will serve the purpose of this guideline better than the TextBlob.

To install Gingerit, write the command below:

Now, we may import the library and create our first example of use.

In this example, we have a nested dictionary that has the text with a typo, corrected version, and corrections as a dictionary in a list. We also have the definitions of the corrected words if they exist in the Gingerit Library such as “bring” and “smell” definitions are missing but we have a definition of the “flower” word. Since it is software specializing in spelling errors, it is difficult to experience any kind of error. We may try the same technique in a longer text.

For a longer example, I have chosen a paragraph from the life of one of the greatest science person in the history of human-kind. You may see the typo errors’ correction below in a screenshot.

Since our output is actually a dictionary in a format of JSON File. We may turn it into a data frame to see the corrections in a wider angle.

You may see the result below:

Last Thoughts on Grammatical Error Exploring via Python and SEO

You may perform the same process via Python for a set of “word documents” in a file with a loop. The custom script can fix all of the grammatical errors and output the result to the same folder with a different name. Fixing all grammar errors in a glimpse is a huge advantage for a Holistic SEO in terms of time and also creates an advantage against competitors. Without a typo error in terms of sentence structure, meaning structure, grammatical error, or punctuation error creating content is not so often seen in the world of content publishing. Because of this situation, this guideline also becomes more important.

We may perform this part in this guideline in the future. Grammatical and spelling errors are important prestige abrasive factors for Trustworthiness, Expertise, and Authority. Google Algorithms and also users’ perception care about correct grammar usage and sentence structure along with punctuation. Thanks to Gingerit Library, we may perform most of those processes. But still, our Grammatical Error Exploring via Python Guideline has tons of missing points. In the future, we will be improving our guidelines.

2 thoughts on “How to Check Grammar and Language Errors in Content via Python?”