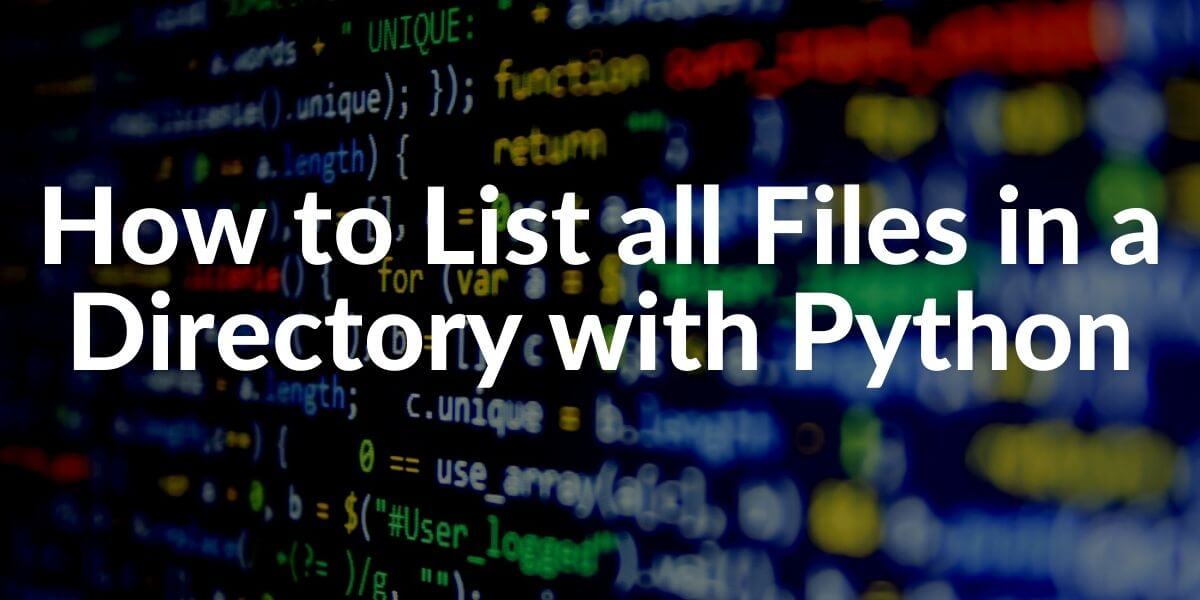 Listing files in a directory with Python means that taking names of the files in a folder via Python modules and scripts. During any kind of Python and Coding Project, taking the names of the files in a folder can be useful. Taking only a certain type of file, certain types of files that are under or over a certain size in KB, or taking files from after a certain date can be useful for analyzing, copying, moving, uniting different types of files and their content.

In this article, we will focus on listing files with Python with different Python Modules and custom scripts.

Listing Files in a Folder with OS Module of Python

OS Module is a Python Module that related to the operating system and it has lots of different functions and methods for managing the computer’s operating system. To list files in a folder, first, we will use “OS” module from Python. The necessary function to list files is “os.walk()”. “os.walk()” function returns the name of the directory, names of the subdirectories, and the names of the files in the current folder. Below, you will see a for loop example for listing the file names in a folder.

You may see the file names in the current working directory as output of the file.

If you want to list only the subdircetories in a directory, you should use the code below.

In this example, we have used “set” features in Python. Since, we are using a for loop to collect all the root, directory, and file names, if we want only the directory names, it would create “duplicated” values such as “__pycache__” or “.ipynb_checkpoints” for our current example since I am using my own personal Python documentation folder. In Python, “set” objects don’t have index numbers or duplicated values, so only the unique values are being appended to our “dirnames” variable via the “add()” method.

You will see the sub-directory names for the current example below.

If you want a clearer view, you may use another for loop for listing all the directory names in a file via Python.

If you want all of the directory names including the duplicated ones, you may use the code below.

You may see the result below and also I recommend you to pay attention to the duplicated values.

With listing files within a directory, you can use “Image” related bulk processes with the methods and guidelines below.

How to List Certain Types of Files in a Directory Python?

To list only the files with certain extensions (certain types of files), “fnmatch” Python Module should be used with “os” Python Module. “fnmatch” Python module can be used for specifying patterns in strings, the determined string pattern is used for the filtering the files according to their types. Also, “os.listdir()” can be used to create a list that contains the file names in the current directory. To create You may see an example for listing all of the files with “fnmatch.fnmatch()” and “os.listdir()” functions.

Now, with the same methodology, let’s call only the files with the “.jl” extension.

We have changed our pattern as “*.jl*”. It means that bring only the files that have the extension as “.jl”. Also, the last “*” sign is not an obstacle here, I am leaving it there for just showing the logic of “pattern and match in regex”. It means that “fnmatch.fnmatch()” function will only return the file names that end with the “.jl” extension. You may see the result below.

If we want to list only the “.ipynb” type of files, we may use the pattern below.

We have four files that ends with “.ipynb”.

How to Filter and List Files According to Their Names in Python?

In this example, we call any file that has “seo” word in it with a “.”. It means that bring any file that includes “seo” in the name from any type of extension. You may see the result below.

Generators are iterators in Python, instead of returning an output, we can yield the result with a custom function and then, iterate over the result elements one by one. We also need to use “os.path.isfile()” to filter the files from the folders or directories. You may see an example below.

Listing Files in a Directory with “os.scandir()” Function in OS Python Module

Lastly, we can use the “os.scandir()” function that makes things a little bit easier after the Python 3.6 release. “os.scandir()” scans all the files and elements in a folder including subdirectories and collects them in the memory for the developer. We will use “os.getwcd()” for determining the path as “current working directory” and we will filter the files with the “is_file()” method of “os python module”. You may see the code block below.

You may see the result of the code above, below.

Pathlib is a Python Module that is being used for file system management. Pathlib Python Module has concrete and pure paths for manipulating the paths of files. To list all of the files in a directory via Pathlib, we can use the “pathlib.Path()” function and “iterdir()” function together. You can see an example of usage for the file listing with pathlib python module.

You may see the list of files in the current directory.

We have determined a pattern as “*.ipynb” so that we can call only those files. We have used “pathlib.glob()” method for filtering the files in the current directory. You may see the result below.

To filter and list files according to their names, you may change the “currentPattern” variable and its regex content as it has been done in this file listing with python guidelines before.