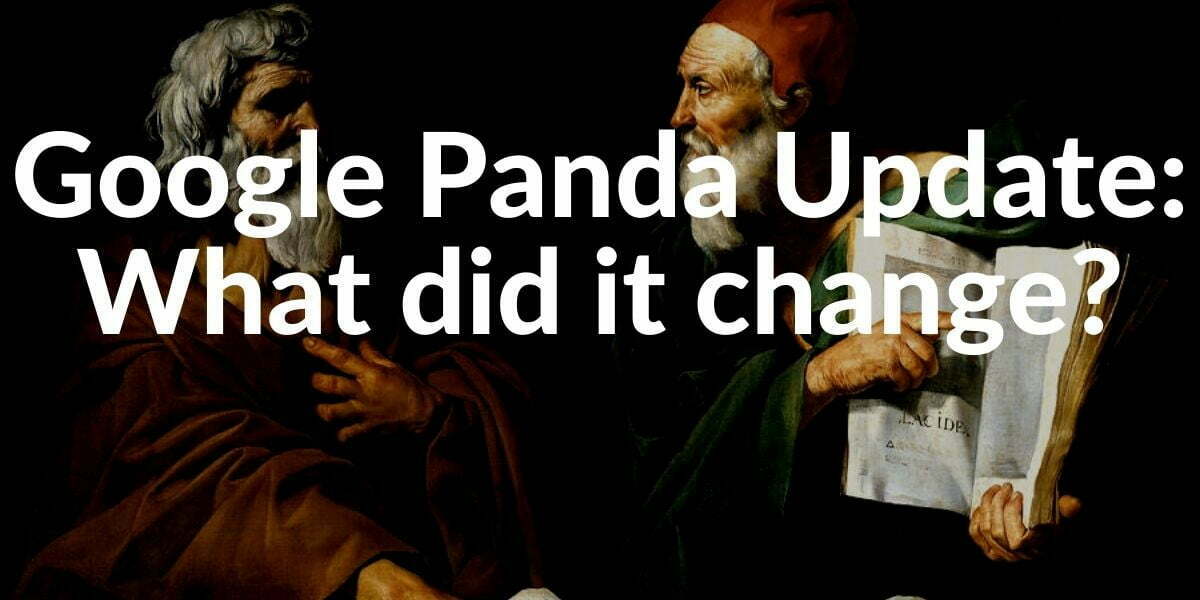 Specifically, the Panda update is a filter that is regularly applied to the entire Google index and significantly reduces the visibility of poor-quality websites, i.e. significantly shifts their rankings in the search results pages. The algorithm change was first introduced on February 23, 2011, in the US search market and then launched on April 11, 2011, worldwide for all search queries in English. On August 12, 2011, the change to the ranking algorithm was adopted worldwide for all available languages, except Chinese, Japanese and Korean. In this context, one speaks of the worldwide publication of the Google Panda update.

The namesake of the algorithm change is not, as is often assumed, the Panda Bear but the Google engineer Navneet Panda, whose contribution was largely responsible for the completion of this filter

What makes the algorithm change so special?

Compared to previous algorithm changes, the Panda update affects the rankings of an entire website or its sub-areas, whereas past updates only affected individual (sub) pages.

According to Google, the influence of the algorithm change on search queries is approx. 12% for all English-language queries and approx. 6 – 9% for all other languages. The Panda update thus had a clearly noticeable effect on an enormous number of websites.

What is the goal of the Panda update?

With the Panda Update, Google is trying to design its algorithm so that websites are rewarded that offer high-quality content and added value for the user. Pages with inferior or useless content will be penalized. In this way, users of the search engine should be shown more informative and suitable search results.

What is the Impact of Google Panda Update?

Pages that did not represent any added value for the user were hit by the Panda Update. These included predominantly so-called content farms, in which the quantitative content was in the foreground and pages with empty content, which were used, without exception, to establish internal links.

Portals were also affected that created many subpages for a keyword and used keyword variants of the same topic. Google usually classifies such texts with a similarity that is too high and therefore as duplicate content.

The new algorithm identifies pages with a high ratio of advertising to content through the Panda Update. Pages that Google positively analyzed for a high proportion of advertising were punished by the search engine with a deterioration in the SERPs or, in particularly severe cases, even with an exclusion from the SERPs.

Online tools, which try to understand Google’s evaluation, presented the biggest losers directly one day after the update was imported with their own visibility index, thereby showing that some websites had to accept a change of up to 86%. The Panda Update mainly benefited media and news sites. Especially with the profiteers of the Panda Update, it is not proven whether they directly benefit from the update or from the deterioration of the competitors who were affected by the innovations.

According to Google, the Panda update affected 12% of all English-language search results. A similar value is usually achieved for the German-speaking world.

At the end of May 2014, Google rolled out the fourth version of the Panda update. While the updates and the first launch of the Pandas took place individually, in 2014 it was a premiere that the Payday Loan Update was played out very promptly. For webmasters and SEOs, this often raised the question of which of the two algorithm adjustments could have caused a ranking change. But while the Payday Loan Update mainly related to very spam-prone search queries and spam techniques, the Panda Update 4.0 was probably a consistent further development of the previous one: the improvement of the quality of the search results.

After rolling out the update, the following effects were found:

In general, it can be assumed that the partially moderate ranking changes are due on the one hand to the fact that Google already properly cleaned up the SERP with the first Panda update and that the company from Mountain View finally set the course for further significant algorithm changes with the fourth version.

The update christened by searchengineland.com Panda 4.1 was rolled out in the week before September 26, 2014, according to the announcement by Google employee Pierre Far. The entire rollout had spanned almost two weeks and should affect between 3 and 5% of all searches worldwide. In his posting on Google+, Far also explained that the new Google Panda update is even better able to recognize low-quality content. Far attributes this improvement to feedback from webmasters and users. The statement may allude to the possibility that Google users can provide feedback on the search results directly with a screenshot of the search snippets.

An important innovation in Panda 4.1 relates to small and medium-sized pages that deliver high-quality content. Because according to Far, these should benefit from the latest Panda update.

By rolling out Panda 4.1, those pages that were affected by Panda 4.0 and have since fixed bugs such as thin content should also have been released from a penalty.

Put indirectly, this can mean that all websites urgently need to optimize their content, to which all Panda updates have had negative effects such as loss of visibility and ranking, and which have not recovered after Panda 4.1.

Factors that the Panda Update punishes:

To determine which pages are rated positively and which are rated negatively, the search engine provider uses various factors. Google lists some of the reasons for the punishment but avoids going into detail about the factors. The investigations of many SEO experts showed that the following errors in large numbers can lead to a penalty:

Many updates to the update brought about significant changes in the ranking. It is difficult to determine what the Panda Update specifically reacted to. As a rule, entire domains were punished in the past if they contained too many inferior subpages. At the same time, this improved the ranking of sites with good content. Especially after the Panda 4.0, many pages that were affected by an earlier Panda update have recovered and have risen again in the ranking. Some tool operators also found that, for example, content aggregators who provide little content of their own were punished.

What should an SEO Know about Google Panda Update in 2020

Google Panda Update’s latest version 4.1 has been launched in May 2014. Since then, SEO and Search Engine World has been experienced lots of new updates. And all of those updates had the same impact on the Search Engine Results Page. The quality has been improved in terms of content and authoritative brands, the spammy web sites lost the rankings. All of those Google Updates have the same principles. Great Content, Great User Experience, Trustworthy Brand creates better results for rankings and more conversions. As Holistic SEOs, we always try to understand Google and other Search Engine’s nature better. We know that Google’s every update will have the same purpose with the same principles but with different methodologies.

Exploring these methodologies may help an SEO to give better signals to Google via its code structure or brand mentions. Knowing Panda Update’s effects and its principles helps an SEO to see today’s SERP situation in a better and solid understanding thanks to these experiences. We recommend you to Matt Cutts’ explanation related to the Panda Updates’ effects on the web sites so that today, we may understand even the stronger algorithms to detect the non-quality content.