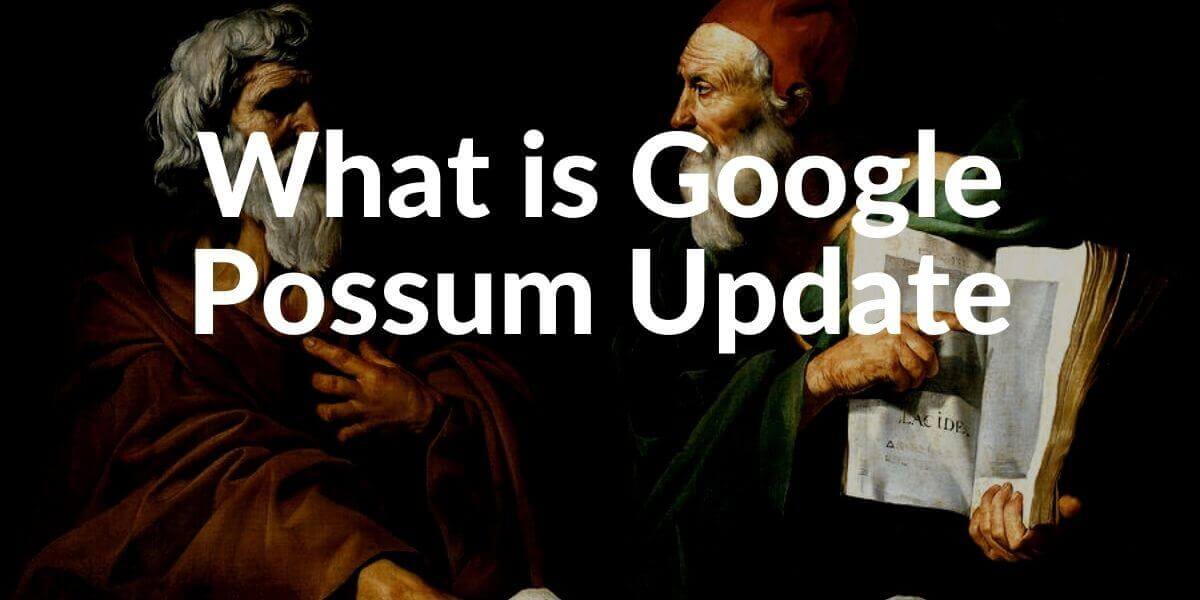 The Google Possum Update was released in September 2016. As part of this update, Google focused on making the crawler process geographically more accurate in information classification for local search.

Google has been releasing major updates regularly for years, thereby adapting its algorithms for evaluating websites as part of the search ranking. These updates can have a huge impact on the ranking on Google. Online marketing experts therefore always keep an eye on the latest updates. The changes that come with an update are different and can be shown through analyzes. One of the last major Google update focusing on local search before the Possum Update was the Pigeon Update in 2014.

Other Google Updates and Algorithms besides Possum:

Why possum is the name of the update?

Some Google Updates have already received animal names in the past, such as the Panda Update, the Hummingbird Update, or the Penguin Update. The SEO community gave the Possum update its name since many companies no longer found themselves in the local search results after the update and no longer ranked for certain keywords, even though the entries had actually not disappeared. They have more or less put themselves “dead”, in English they also say “playing possum”.

Google’s algorithm updates have been given cute animal names for years. In contrast to panda, penguin, and hummingbird, the namesake of the latest update is rather unknown in most countries. The possum, however, has a very special feature that was the deciding factor in the unofficial naming for the update: if there is a danger, the possum is dead, hence “standing dead” in English is colloquially “playing possum”. After many entrepreneurs searched in vain for their Google MyBusiness entries in the local search results, because these were filtered out by the latest changes in the search algorithm and no longer displayed for certain keywords – meaning they were practically dead, the local search community quickly dubbed the new update in the name of Possum.

Experts have noticed some changes that can be attributed to the Google Possum Update. These changes primarily affect local search results.

Small local businesses in particular benefit from the fact that Google has relaxed the consideration of city limits and instead takes more account of the actual local proximity to the user. Previously, Google’s rigid city limits mainly affected companies that were just behind a city boundary and were therefore not taken into account due to their zip code or telephone code.

So far, the city or district boundaries could have been problematic for businesses that were located just outside the region affected by the search query. Improvements were made here so that these “hard” limits were softened.

Until the Possum Update, Google only ever delivered exactly one result to an address. The problem: If several providers of the same services shared an address, as is the case, for example, in a medical center, only one provider appeared in the Google results. After the update, competitors or partners with the same address appear equally in the search results. Google My Business entries are decisive here.

Filtering based on the address, Google tries to avoid multiple entries from the same company in the SERPs. So far, primarily telephone number and domain have been used. Companies with the same domain had little chance of being listed together. Since Possum, Google has increasingly used the address of the locations. Now share e.g. For two companies an address this can be problematic.

While similar keywords were most likely to return the same search results before the update, small changes to the keyword can now result in other search results. Exact keywords and the associated search volume are becoming significantly more important.

Keyword variants are becoming increasingly important: the search for “Pizzeria in Munich” may now produce different search results than the search for “Munich Pizzeria”.

Why a Web Entity can be Affected by the Possum Update Negatively?

With every Google update there are winners as well as losers, whose entries suddenly rank worse or maybe even no longer be included in the search results. Of course, that’s no different at Possum.

The latest Google update mainly affects page entries that share the same postal address. When looking for a dentist, for example, it was not uncommon for different doctors to appear among the first search results, all of whom ultimately belong to the same group practice. In addition to the entries for the individual doctors, there was usually also an entry for the group practice itself. However, such a ranking is anything but useful for the user, which is why Google is now filtering out duplicate or very similar results in the Local Finder. MyBusiness entries from the same industry category and with the same address are now recognized by Google as belonging together and accordingly only one entry is shown. Unfortunately, this also happens when two independent companies from the same industry work in one building. The filtered results only become visible again when the user zooms into the map.

This is similar to the Canonical URL for preventing the duplication on the web while bloating the SERP.

The relevance of well-maintained Google My Business entries was made clear once again by the Google Possum Update. The Google Possum Update has a particular influence on the position in the local packs and on Google Maps. A position in the local packs ensures more traffic on the page. Local businesses in particular should adapt to the new requirements and invest in local SEO. In general, Google has increased the user-friendliness with the update and put the focus more on user intention. With regard to search engine optimization, the effects on the keyword variations play a role.