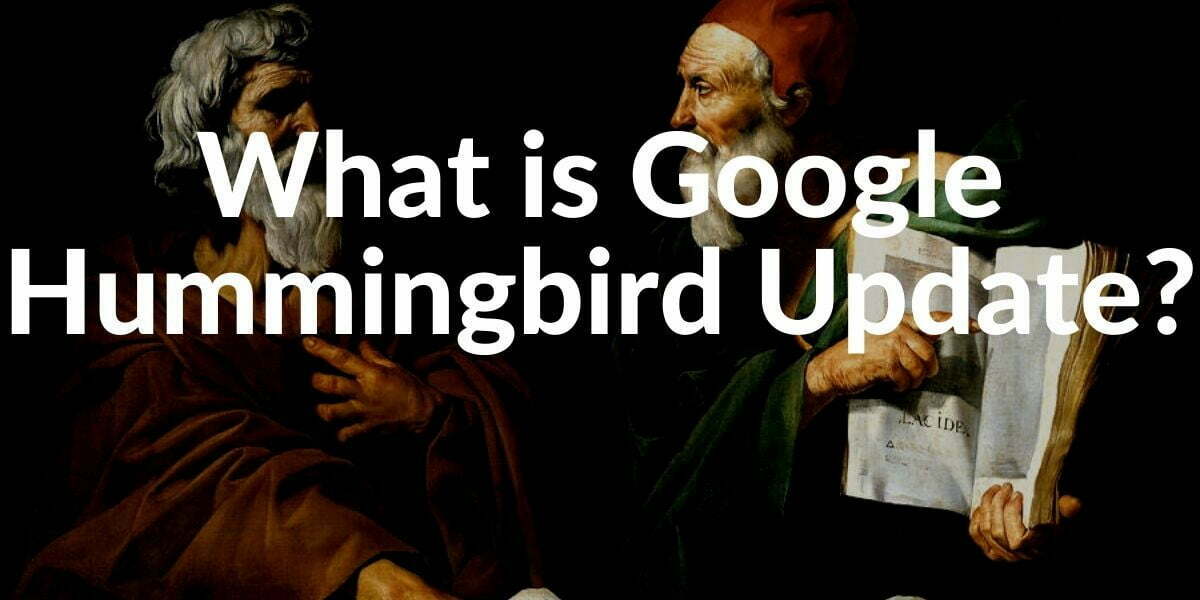 The code name Google Hummingbird (also known as the hummingbird algorithm) refers to a search algorithm that has been in use since 2013, which enables Google for the first time to recognize the connection between search queries. With this method, which is also called semantic search, the search engine can analyze the user intention behind the search queries. As a result of the update, Google is increasingly approaching the goal of being able to answer complex questions precisely.

Just in time for its 15th anniversary, the Google group released a new update for its search engine. The special thing about it: A similar major change was last made in 2001. A new algorithm called Hummingbird Update changed the entire basis of the search engine. Since the Hummingbird Update, the “new” Google has not only been able to simply search for words that have been entered, but also to interpret them. According to Google, this works particularly well when searching using voice input. Here the search engine interprets the entire sentence (instead of individual words) and can provide even more precise and helpful results.

Questions like “Where is the closest pizza store” and “What is its rating?” can be asked by Google via voice search easily thanks to Google Hummingbird Update. You may learn more about Related Google Algorithms and Updates via our Guidelines:

The importance of Hummingbirds for Google

The launch of Hummingbird on Google’s 15th birthday in 2013 was the starting signal for the semantic search. Google has described this algorithm update as the most significant since the  Caffeine update in 2010.

It is said to have affected approximately 90% of all search queries at the time of introduction and was a real algorithm update compared to Caffeine. It should help to better interpret complex search queries to better recognize the actual search intent or question behind a search query and to offer suitable documents. The actual intention behind the content should also be better matched with the search query at the document level.

What is the goal of the Hummingbird update?

The name comes from being precise and fast.

The new search algorithm can interpret the entire search query (better) instead of just searching for individual words within the search query. Google understands the intention of a search query and the content of a web document even better. These two factors are fundamental to improving search results.

Or summarized in the words of Danny Sullivan, Founding Editor of Search Engine Land:

What does the Hummingbird update say?

According to Google, the Hummingbird update, in particular, should improve voice search enormously. For spoken search queries, the user’s entire search query (the spoken sentence) is also better interpreted, and more relevant results are returned. The search results are sorted differently than before and ultimately provide a more precise answer.

Hummingbird makes results even more useful and relevant, especially when you ask Google long complex questions. And it affects about 90% of searches worldwide.

Example of search results before and after the Hummingbird Update (according to Google):

SEO expert voices from the industry on the Hummingbird Update

How’s it different? People asking more complicated questions. So how to keep results so relevant in light of these. Hummingbird impacts all types of queries we get, but far more effective on these long queries we get now.

Indexing and ranking go hand in hand. Fundamentally, both these systems impacted our ranking quite a bit.

Gave us an opportunity, hummingbird did, to take synonyms and knowledge graph and other things Google has been doing to understand the meaning to rethink how we can use the power of all these things to combine meaning and predict how to match your query to the document in terms of what the query is really wanting and are the connections available in the documents. and not just random coincidence that could be the case in early search engines.

As noted in our Google ranking criteria yesterday, today and future, the knowledge graph will probably play a central role here. So far, however, there was no more detailed information about the Hummingbird Update. However, Danny Sullivan was able to talk to some Google employees after the press conference and publish a quick FAQ. The summary of Danny Sullivan’s FAQ Publication related to the Google Hummingbird Update is below:

Bill Slawski wrote a very good blog post with Google Hummingbird Patent, which also gives a nice example of what Google would like with Hummingbird:

Google might look at the query [What is the best place to find and eat Chicago deep-dish style pizza?], And understand that a searcher looking for results for that query would likely be more satisfied with the use of “restaurant” instead of “place ”. The use of “restaurant” instead of “place” might be considered as a potential synonym or substitute based upon substitution rules which focus upon co-occurring terms that might show up in search results when those terms are searched upon or co-occurring terms in query sessions.

In the end, the introduction of the Hummingbird algorithm is also a step towards better search results for search queries using Voice Search. Complete questions are often formulated here and not individual search term combinations. Furthermore, Google announced information about new functions within the Knowledge Graph and presented new Google Search designs for mobile devices. You may watch the Hummingbird Introduction from Google I/O 2013 Video:

Effects of Hummingbird Update on SEO

The Hummingbird update didn’t just change the way Google’s algorithm works. Of course, it was also important for experts from the area of ​​search engine optimization to adapt to the new developments. Probably the first influence from the Hummingbird update was that the design of the content became even more essential. That started with Panda and Penguin and was a clear development anyway. The Hummingbird Update made the relevance of websites even more indispensable. High-quality texts without duplicate content were now critical if you wanted to achieve a good place in the SERPs. One of the most interesting innovations was the increased importance of long-tail keywords. Because the algorithm now understood the causal relevance of the content after the Hummingbird Update, the use of the extended keywords was a good opportunity for improved optimization. The Google Hummingbird Update is still active today and sets the standard for content-related advice on entries on Google. With new quality control in the area of ​​content, it is still influential for websites that they orientate themselves according to the standards set at the time in the area of ​​content.

From 9:10, you may watch the Hummingbird Algorithm Update’s explanation from Google’s 15th Anniversary Events.

Most of the SEOs thought that Hummingbird Update will create a SERP Design which scarce the organic traffic from Google so that Google can satisfy the search intent by itself. Especially, Google has started to read entities and understand the strings’ meanings thanks to its extensive databases since 2013. In 2015, with the Hummingbird Update, Google also made a revolution for the Semantic Search and started to understand the search queries even better. This has created a better spam-fighting potential for the Search Engine while letting it understand queries and search intent along with necessary answers better. Because of this situation, Knowledge Graph Elements has increased in millions and also Google has started to answer the queries on the SERP. As Holistic SEOs, we are not strangers to this situation. Today’s SERP has its own dictionary, currency converter and calculator, fly ticket comparators, mortgage calculators, and more… But yet, none of those SERP Features couldn’t prevent these sectors from growing and taking more organic traffic in years.

Cooperating with Google’s SERP Features with the Information of Hummingbird

Because Google is not the only source for Organic Traffic. Creating customer loyalty and a strong brand in a specific niche is way more important than answers on the SERP. Unlike the reactions in 2015 from SEOs, in 2020 Holistic SEOs see the Knowledge Panels, Featured Snippets or Google’s own answer features on the SERP as an opportunity to cooperate with Google. Being an information source on Knowledge Panel or Knowledge Graph with an entity-based Search Engine Optimization can create more trust in the both Search Engine and the Users. Google only chooses reliable sources as Featured Snippet or Knowledge Graph owners on the SERP. Triggering these SERP Features for his/her own SEO Projects is one of the most critical purposes of Holistic SEOs.

Hummingbird Algorithm is an important signal for a Holistic SEO in terms of showing the consistency of Google’s updates in years. Search Engines want to create a better engaging SERPs and adapt themselves to futuristic search behaviors such as voice search. They also always want to categorize the web pages, queries, and contents in a better understanding way to organize the information in a better-structured way. Hummingbird gives us to understand the power of Semantic Search, Branding, Importance of targeting topics instead of queries, and differentiating the main and sub search intents from each other while optimizing for every one of them.

Also, using unique content and unique information in the content is more valuable. Giving the necessary information without any gibberish sentences is one of the most important purposes of the Hummingbird Update. As Holistic SEOs, we will continue to improve our Hummingbird Algorithm Update Information Article.