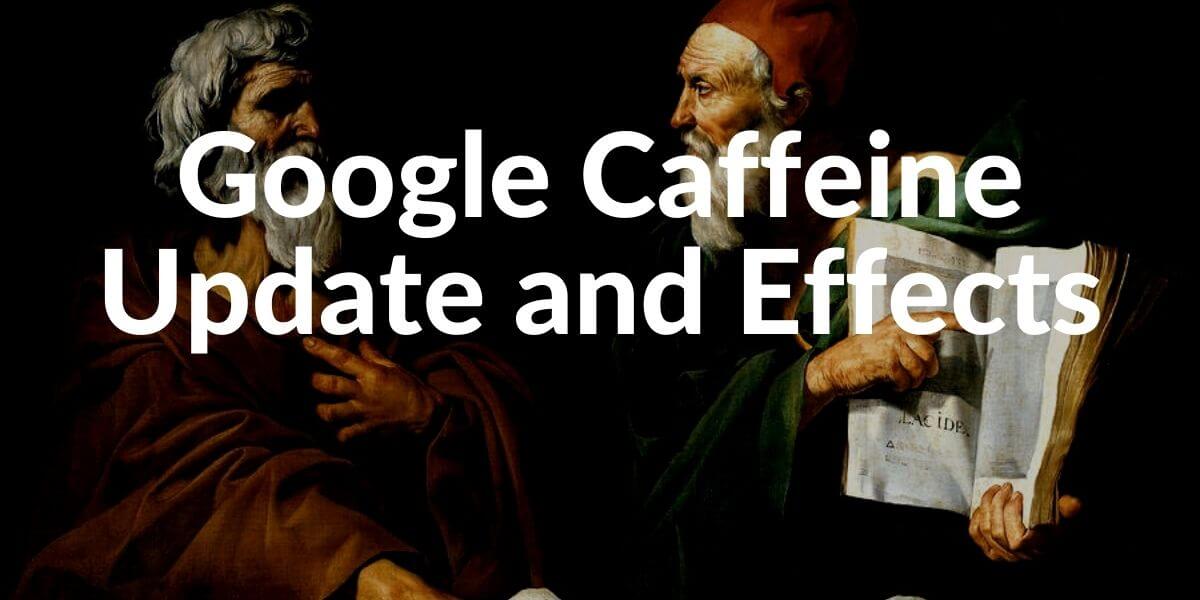 With the increasing popularity of its own search engine, Google also had to recognize that many established processes no longer worked well enough. After all, the idea behind the algorithm and search index was born at a time when there were several million websites in total. At the latest in 2010, however, millions of subpages were added every day. The Google Caffeine Update was developed to pay tribute to the changes on the Internet. It was one of the biggest updates to the infrastructure behind the search engine and changed the design of the SERPs in a way that can still be seen today.

Before the infrastructure update, Google’s search index consisted of several layers. In order to update a shift, the entire web had to be analyzed, which took some time. There was therefore a significant delay between the time the page was discovered and its visibility in the index.

In 2000, the index was only updated every 4 months. At the end of 2001 the indexing frequency was increased once a month.

The new search index Caffeine includes an incremental and continuous crawling and indexing process. Each website can now be crawled separately and included in the index shortly after publication.

Most named Google updates have dealt with the algorithm in some form. Be it Florida, Panda, Penguin, Hummingbird, or the Fred Update – they all set the conditions for ranking in one way or another. Google Caffeine therefore only fits into the series of these names to a limited extent. It was a complete change in internal processes and processing that ultimately led to indexing. There were many reasons for this. For one, Google had to determine for itself how quickly the Internet and the way its content is changing. On the other hand, growth itself has developed much more rapidly than the search engine itself suspected.

The Google Caffeine Update was mainly necessary because the basic dynamics of the web changed in 2009 and 2010. Instead of static websites, which were rarely changed, there was new content every day, every hour and every minute. Live updates and dynamic content had become popular and provided new information for users. At this point in time, the process for the index was designed to ensure that the pages on the Internet changed only at long intervals, if at all.

How did Google work before and after the Google Caffeine Update?

Before the Google Caffeine Update was applied, the index consisted of several layers. There were some shifts that were updated more often than others. In order for one of these layers or levels to be updated, a complete search of the stored pages in the layer was necessary. As a result, the web pages were sometimes stored in one of the layers for quite a while but were not transferred to the search index if the corresponding layer was not scheduled to be transferred to the SERPs.

In the beginning, the intervals for such an update were four months, but over time Google had already reduced the time to one month. However, since thousands of new websites were still added and indexed every day, it sometimes happened that these were only found in the SERPs after a few weeks. This also applied to dynamic content that was created on the already indexed websites.

The goal was to stimulate and energize the search index based on the name of the Google Caffeine Update. In the future, all data centers should deliver simultaneous results. At the same time, it was important that current content was a priority in the search engines. This became particularly clear when the search engine was unable to provide the latest information to the searcher in the event of current events. The Google Caffeine Update completely changed the way that websites are indexed and are still active in this form today.

Flexible index with attention to news and social media

After the Google Caffeine Update, users were able to observe several interesting innovations. On the one hand, websites that were still relatively new and only wanted to position themselves could now also be found in the search results. You didn’t have to wait for weeks or even months for the first results from search engine optimization to be seen. Above all, however, it became clear that dynamic and new content played an important role. The Google Caffeine Update provided the basis for Google News and the display of current content in organic search.

Another important innovation was that the emerging social networks played a role in the index. So far, these have hardly been recorded. Facebook was at the peak of its reach in 2010 and controlled the Internet in all other places. The search engine was still reluctant for a while, later tried to establish its own social network with Google Plus. Nevertheless, the Caffeine Update allowed the content from social networks to be reflected in the index for the first time. This was also to the advantage of the users, who could also see the developments on these pages in this way. SERP Design Updates to hold the users on the Google Ecosystem instead of sending them to the other platforms is one of Google’s principles in this context. Also, decreasing the ranks of Facebook and Twitter while boosting Youtube on Google’s SERP is one of those principles.

The right use for SEO according to Caffeine

Since the Google Caffeine update was one for the infrastructure and not for the algorithm, there was no direct impact or indication of changes in the work. But of course, the new dynamization of the content has brought about a change. Websites that have made regular updates or that have regularly published new articles have been preferred by the new dynamic crawlers. There were strategies for the correct publication of new articles on your own page. In fact, a mixture of regularly updated content, good use of social networks, and constant publication are still appropriate.

In any case, the Google Caffeine Update changed the way we use Google. The search engine has positioned itself for a new decade. The question remains what has been planned for 2020 and the next ten years.

Google Caffeine Update shows the importance of fast crawling, rendering and indexing process for a Search Engine along with the different industries such as news and job posting. Caffeine Update is a signal for a Holistic SEO that making easier crawling, rendering, and indexing for a Search Engine Crawlers and Systems is a ranking booster. Since, Google performs big infrastructural database reconstruction with millions of dollars and expansion of its own databased with more cost, creating more cost for Search Engines in the indexing process than competitors’ cost can be a bad quality signal.

A Holistic SEO always should think from the perspective of users and Search Engines at the same time. A user wants to see fresh content and a Search Engine wants to index the fresh content. Updating a content with regular basis and new information and making a smooth crawling, rendering, indexing process for Search Engines are one of the most important and basic continuous, always-on sides of SEO.

Caffeine Update’s logs on the internet can help a Holistic SEO to understand this process. Google sends 24 Billions of organic sessions to the news sites today. Also, creating news sitemaps, image sitemaps and sitemap index, optimizing the JS, CSS, Image assets on the web pages and improving the page load timing while decreasing the size in sum are the important always-on sides of SEO.

As you may see, these updates including Caffeine still show the same principles with the updates from today for Google and Search Ecosystem. Because of this consistency, we will continue improving our Caffeine Update Information and Guideline page.